Jesus and the man born blind. By Fabian Massa. 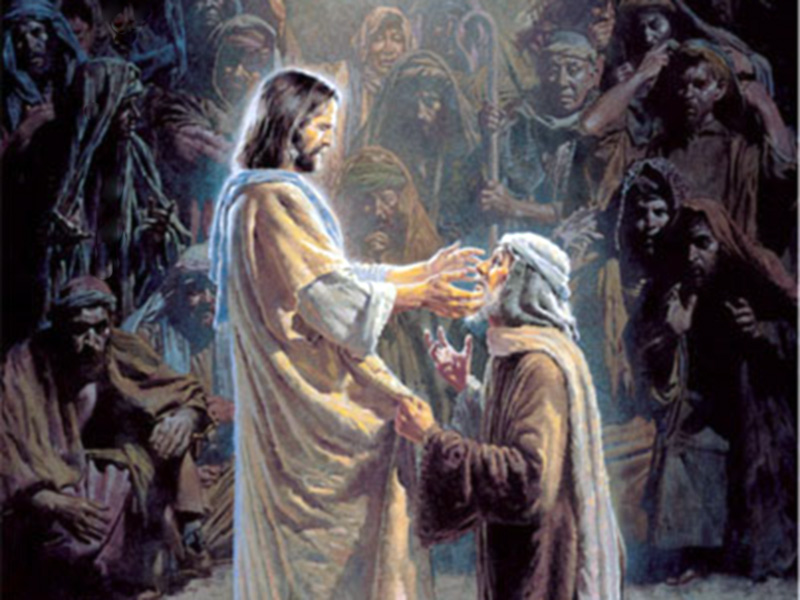 In Jn. 9.1 to 7 the Bible tells the story of a man born blind. Jesus and his disciples went through there and then the following exchange took place:

- He asked his disciples, saying, Rabbi, who sinned, this man or his parents, that he was born blind?

Because popular belief was that such a misfortune (in those days a man in that situation was forced to live a miserable life as a beggar) could only be a punishment from God.

- Jesus answered: It is not that this man sinned, nor his parents: but that the works of God might be displayed in him. I must work the works of Him who sent Me while it is day: the night cometh, when no man can work. While I am in the world, I am the light of the world.

Having said this, he spit on the ground and made clay of the spittle, and he anointed the eyes of the blind man mud. This spit was something considered in bad taste and worse education, but put another person in the eyes of the road land (something unclean) mixed with saliva was definitely crazy. But this Jesus did not care and said:

- Go, wash in the pool of Siloam (which means Sent). The blind was obeyed and did as the Master ordered, washed and came back seeing.

Jesus had told his disciples that He could do nothing of himself, but what he saw the Father doing, because whatever the Father does, these also doeth the Son likewise (John 5.19)

Why in the story of the blind man Jesus made clay and applied it to the eyes of the blind? Because He had seen his father make man from mud in Eden (Gen. 2.7) Perhaps in the eyes of the blind will be missing something: the lens? Does the cornea? Is the optic nerve? Jesus used the original material for the "piece" missing: Barro [1].

Jesus is the Amen, the answer to all prayers. It is also the True Witness of all Creation. Jesus is the beginning of God's creation. (Rev. 3:14) He was with the Father and was ordering him around his delight day by day, rejoicing always before him at all times. (Prov. 8.30)

Read the Word and He will reveal the secret places, hidden treasures will show you the secrets to the "wise" can not access (Isaiah 45.3). The beginning of true wisdom is the fear of God (Prov. 1:7). Read the Word, and have revelation from God, because He is pleased tell their secrets, we are His children. Read the Word, and each day will surprise you with something new, as if to read it first. The will amaze you, you will be amazed. Read the Word!

"For the Father loves the children, and show them all things that himself doeth: and greater works than these will show, so to wonder at". (John 5.20 B)