Adam, Eve and the serpent Najash. By Fabian Massa. 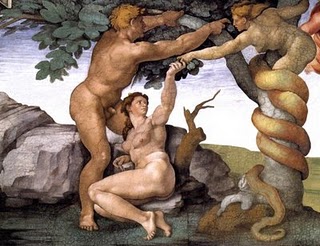 A. The consequences of sin in Eden.

The consequences of original sin (the 1st disobeying God) still take effect today (and it will permanently, unfortunately) in Creation.

The scene is archiconocida: Chapter 3 of Genesis, in the Garden of Eden.
The actors, in order of arrival on the scene:


The instruction given by Jesus was simple:

Gen. 2
16 And the Lord God commanded the man, saying, Of every tree of the garden you may freely eat;
17 more of the tree of knowledge of good and evil you shall not eat, for in the day that you eat of it you shall surely die.

In the first verses of Genesis 3, develops the following act:

Adam Eve somewhat apart, walking in the garden is about (too much) to the Tree of Good and Evil

A mind influenced by machismo decadent twentieth Century could assume that Eve Adam walked precisely to what was prohibited.

But a feminist would ask something like: "What could be more important for this man to be caring for his wife" (the "man" and scornfully read the rest of the sentence in an indignant tone).


The truth is that learning rescueing 1 might be: "Never approach an object of temptation."
At that time the snake enters the scene, who are already seeing the attitude of Eva, the incites to take the fruit and eat it. Eva after a moment of resistance [intensity equal to zero (0)] jack fruit, and eat. Not satisfied with this also leads to Adam, who without asking where he got it, also eats. That is, did the same as we do when our wives bring us food.

a. The rest of the story is known:

They realize they are naked and ashamed for the first time. Lose
the "spiritual sense" and seek to hide from God gives behind some bushes.

When asked God to Adam about what it was that had happened, in the first instance Adam blames Eve and second, the very God for giving him "like" woman.

b. Eve blames the serpent.

When it was the turn of the serpent, this looked back, but found no one, so I faced the problem alone and it was pretty bad.


The original sin was to disobey God only prohibition imposed:

a. The consequences for Humanity

Gen. 3
17 And unto Adam he said, Because thou hast hearkened unto the voice of thy wife, and hast eaten of the tree of which I commanded thee, saying, Thou shalt not eat of it: cursed is the ground for thy sake, in sorrow shalt thou eat of it all the days of your life .
18 thorns and thistles for you, and you will eat the plants of the field.
19 In the sweat of thy face shalt thou eat bread, till thou return unto the ground, for out of it wast thou taken: for dust thou art, and unto dust you shall return.

The earth was cursed and now all work will become easier "forced labor." With the emergence of "thorns and thistles" keep clean and gardening is no easy task.
Adam From here, the vast majority of men must strive to earn our money.

Physical death is announced and implicitly the process leading to it: old age and disease characteristics of the same. But apparently nothing had changed about Adam and Eve continue with your life, then in Chapter 4 are the children grow. But living life away from God had a negative impact on the family, what we see in Genesis 4.

So it is with sin, apparently it's all "equal" but it has opened a door to misery: This family lost communion with God, the father lost his job, had to "get away" from a place of privilege in every sense , to fit in a harsh and forbidding land. In the prime of life of the children, the greater the child killer and is deported to the "Land of Wandering." What is said a family destroyed.

a. The Crisis in marriage

The marriage was resentful. Adam after the fall, and not refer more to its women as in Gen. 2.23:

"And Adam said, This is now bone of my bones and flesh of my flesh: she shall be called Woman, because she was taken from man."

The woman was no longer her "beloved wife" but from now will call the "mother of my children" which is the common way to divorced men to refer to their "ex-wives":

Gen. 3.20 and Adam called his wife's name Eve, because she was the mother of all living.

To the woman God said Gen.3.16 "... I will greatly multiply your pain in childbirth, in pain you shall bring forth children, yet your desire shall be for your husband, and he shall rule over you.

To the woman who said that everything is God, have pains in pregnancy and childbirth. Always longing for her husband's attention and have to abide by what he says.
Furthermore, God cast Adam and Eve out of Paradise. This lost the place God had prepared for fellowship with them and access to the Tree of Life [1].

b. The consequences for the snake

Gen. 3.14 and LORD God said unto the serpent, Because thou hast done this, thou art cursed above all cattle, and above every beast of the field; upon thy belly shalt thou go, and dust shalt thou eat all the days of your life.

For many years there was speculation about how the snake would before this time. Clearly before "lived not eating the dust of the earth" as a metaphor to mobilize crawling on the ground, because that is what you mean "upon thy belly shalt thou go."
A teacher once ventured Institute: "Maybe the snake had wings and kept them upright to move" [2]. (All right, she's a girl with wave "Naif.")


B. Nachash, the mother of all snakes

On Thursday April 20, 2006 was published an interesting note in the newspaper "The Nation" which follows is an excerpt:

Nachash, the mother of all snakes, had two legs. She was the mother of all snakes. And lived in Patagonia. So they called paleontologists Najash rionegrina. "Nachash" in Hebrew means "snake" and the name refers to the tradition to which God condemned to crawl for having deceived Adam and Eve.
While crawling, this snake of 90 million years, whose fossil remains were discovered in the province of Black River, had legs: only two, the rear. He also had hip, an anatomical feature of modern snakes lacking and that allows us to say that would be the link that allows linking with four-legged reptiles that go down.

Nature published today ....:
"This snake is an important finding because it is the first that has sacrum. This represents an intermediate morphology that had never been seen [in snakes], said Hussam Zaher meanwhile, a researcher at the University of Sao Paulo, Brazil, and coauthor study. fills an important gap
Morphological information about the early evolution of snakes. "

The unexpected
The fossils were found in 2001 nachash in La Buitrera, a paleontological site northwest of the province of Black River. There Apesteguía and colleagues have seven years performing exploration tasks. "What one finds in The Buitrera is something that does not expect, 'said Apesteguía ...... In 2001, Paul Gallina, a team of paleontologists, he found the first remains of nachash." Found almost entire skeleton (from the first vertebra of the neck to the beginning of the tail), feet and part of his jaw Apesteguía said. Later we found fragmentary remains of a larger sample and half skull found last year. "
With all those pieces, researchers began to piece together, the end result is an animal of 1.5 meters long that may seem rather strange - A snake with legs!
By Sebastian A. Rivers
Of the Writing of the NATION

In my opinion, the loss of the legs of the Najash gives a blow to the theory of evolution.

According to this theory, species evolved from the most basic to the most equipped, the loss of his legs puts at a disadvantage.

Also hitting the "Law of Natural Selection" which says that "nature" promotes the fittest to survive on less. This situation is obviously a "regression".


Anyway, the point is that from that moment, by a judgment of God, the snake began to crawl and to be a kind odious to mankind:

Gen. 3.15 and I will put enmity between thee and the woman, and between thy seed and her seed it shall bruise thy head, and thou shalt bruise his heel.


All these consequences are still valid today.