Angels as sons of God in the New Testament By Fabian Massa.

When Adrian Pablos and I began to study this issue in 2009, there are three direct and indirect references to the N. T. the belief that the "Sons of God" were angels. This is part of the book "From Eden to the Nations" which we believe will be printed, God willing, by the end of 2013. 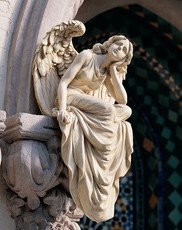 Images from the Book of Enoch, quoted in the v. 14-15. This letter (the Book of Enoch) belongs to Jewish literature and is not part of the Bible. It speaks to the lack of rain and fruits, and referred to the imprisonment of the stars [2].

14 of these also prophesied Enoch, the seventh from Adam, saying, "the Lord cometh with ten thousands of his saints, 15 to execute judgment on all and to convict all the ungodly of all their ungodly deeds which they have ungodly committed, and of all their hard speeches which ungodly sinners have spoken against him. " Commentary Judas RV 95 15

According to the note on Judas NIV 1.6 According to some Jewish traditions, God assigned a different responsibility and authority to each of the angels (See Daniel 10:20 - 21) ... However, according to this Jewish tradition, some of them , the sons of God mentioned in Genesis 6, left the responsibility that had been assigned to have sex with women, becoming the devil and his angels (Matthew 25:41 Jesus says: 41 Then he will say to those who are themselves Left: Depart from me, you cursed, into the eternal fire prepared for the devil and his angels.) This book was considered canonical from 325 AD date of the Council of Nicaea I. Besides referring to Enoch, also cites two other apocryphal: a) The "Assumption of Moses" in the v. 9 b) and "The Testament of the Twelve Patriarchs" (Neftalí3.4 - 5) [4]

The letter was originally written in Greek in such perfection to the letter of James. Hapax has 62 [5] of the New Testament, which involves comprehensive vocabulary and the use of the Septuagint by the author. Uses own rhetorical elements of Greek time (antithesis, synonyms accumulated rate) and grammar (use item and conjunctions) [6]. 1 Pe.3.19 and 20 to (Christ) Through the Spirit went and preached to the spirits in prison, that in ancient times, in the days of Noah, disobedient, when God waited patiently while the ark was being built. NIV. RV 95 Commentary 1 Peter 3.20 a Jewish tradition of the text referring to Gen. 6.1-4 perverted angels who disobey God. Following the order of the story in Genesis, Peter relates this episode with the flood. In verse 3.19 Peter indicates that Jesus preached to those fallen angels who had sinned against God in Genesis 6.

2 ° of Peter 2:4 God spared not the angels that sinned, but cast them down to hell and delivered them into chains of darkness, to be reserved for judgment. RVR 1960. The apostle refers to these fallen angels, who were locked in "chains of darkness" will come back to this topic in the second part, we study the postdiluvians spirituality. These angels according to this passage, are those who are imprisoned for the Last Judgement (editing comments RV95). In Matthew 25:41 Jesus was referring to the same group of fallen angels, as also mentioned in the Book of Enoch [7]. Obviously, those who maintain a traditional position, do not accept these terms in Jude and 2 Peter referring to the apocryphal book of Enoch, but the quote is direct. As we can see, in the first century some of the main leaders of Christianity have considered that the sons of God of Genesis 6 were angels, that because of his rebellion were doomed to eternal darkness. Similarly, reference to the Book of Enoch is direct and indirect Judas 2nd Peter. Clearly this literature was well known, and the Book of Jubilees [8] and the Damascus Document [9].

D. An indirect reference to Paul:

[1] Star, Strong 792 Aster, and watered the sky. Dictionary Strong. The pericope begins in 1.6 where Judas relates to the children of God with the angels "6 ... they did not keep their positions of authority, but left their own habitation (spiritual nature), has perpetually imprisoned in the darkness for the judgment of the great Day 7 Even as Sodom and Gomorrah and the surrounding cities are placed as a warning, to suffer the punishment of eternal fire, for having practiced, as those, sexual immorality and vices against nature (ie sex - carnal- did not correspond to his spiritual nature) "Judas 1.6 NIV.
[2] Read Stars or Angels.
[3] The Book of Enoch (1 Enoch abbreviated) is a intertestamental book of the Bible of the Coptic Church of Ethiopia but is not accepted as canonical by the other denominations.
[4] http://es.wikipedia.org/wiki/Ep% C3% ADstola_de_Judas and intertestamental Jewish literature, of G. Perez Aranda, F. García Martínez & M. Pérez Fernández. Ed Divine Word, page 156.
[5] hapax: Words that were used only once in the Greek text.
[6] http://es.wikipedia.org/wiki/Primera_ep% C3% ADstola_de_Pedro
[7] This book is considered apocryphal.
[8] The Book of Jubilees, a Jewish apocryphal pseudoepigráfico, written approx. in the year 100. C.
[9] The Damascus Document was found in a forgotten manuscript repository of an ancient synagogue in Cairo. referring to the history of the Essenes, a sect that opposed the Pharisees and Sadducees circa 200 BC At first he was not given importance, until they were fragmented nine copies of this document from the Qumran scrolls, then it became clear the historical value of this finding. The reason for the opposition, which ended in the Essene Schism, was because the Pharisees priestly caste, the court imposed by oak of Scripture, not practicing forgiveness of debts of the poor to the 7th year and the return of land to the poor in the year of Jubilee (committed by the poor because of their debts). Jesus confronts the Pharisees in Matthew 23 hard. The NIV Archaeological played excerpts from the translation of the Damascus Document by Duane Garrett (page 1646) On page 1645, explains: "The Master of Justice (Leader of the Essenes in schism) firmly believed that God had revealed all mysteries prophetic, not only giving authority for the interpretation of Scripture, but also to generate new literary inspired equal with Scripture.