The Names of God. Part I. By Fabian Massa. 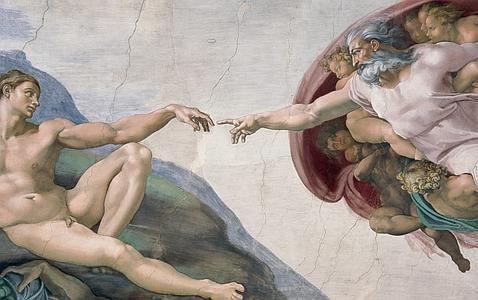 (*) "Asher Eheie Eheie [3]" which is translated as "I am who I am", and perhaps better: "I will be who I will be", but certainly it can be reduced to "I Am", as expressed by the same Torah and contained in our Bible.

The Lord said to Moses and said a turning point: Through him God would deliver Israel from oppression in Egypt. It had been a while again and God manifests and unveils a new name: YHVH.

2 God spoke to Moshe (Moses) and said: "I am the Olan (Eternal God). 3 I appeared to Abraham, Yitzhak (Isaac) and Yaakov (Jacob) as El Shaddai (God Almighty), but by my name Yahweh (I am who I am) I did not know before them.

The Lord entrusted to Moses His name again, and he made it known to the people of Israel. And everyone knew the name of God. But men do not know today as the name says.
How was that missed the pronunciation of the name of God?

The scribes (scholars who comment and interpret the Torah) interpreted the commandment: "Thou shalt not take the name of the Lord thy God in vain" (Ex. 20:7) as a prohibition to use.
The Jews in general to reach tetragrammaton reading or tetragrammaton ("four letters" YHVH), said Adonai, which can be translated as "My Lord." (Currently, it is translated as Lord, the Lord God, the Eternal, etc..)
And so, over the centuries have forgotten the correct pronunciation of YHVH. Not to pronounce (and sin) God's Name replaced it with other terms such as:

What about YHWH and Yahweh?

Classical Hebrew, ancient and modern, as is written only with characters for consonants. While each consonant was associated with a vowel, vowels were not written.
That is, to decipher the writing, we only have the support of our fund consonants and lexical knowledge of Hebrew.
For example, if the written Spanish followed the same pattern as the Hebrew graphemes could read the following:

The letters YHVH then how are pronounced?
Nobody knows the exact pronunciation. The Jewish tetragrammaton to meet with a text, say Adonai.

What did the medieval Jewish sages [5] when they invented a scoring system to mark the vowels?

Well, the marks inserted between the vowels of Adonai YHVH consonants. (The "I" of Adonai actually corresponds to the mean vowel Yud, "Y"). The word was thus: "Yahovah".
As a rule of Hebrew grammar, the first "A" of Adonai, becomes an "E" soon. Thus appeared written: "Yehovah".
Thus, in books written with the new notation, to reach one YHVH was dotted with the vowels of Adonai, Jehovah ie. What for? Well, to remind the reader that the word was pronounced Adonai, and not otherwise. "

It is clear then that "Jehovah" is a mnemonic devised by the Masoretes [6] (Rabbis and Jewish scholars who edited the Hebrew Old Testament from the seventh century BC onwards).

To not declare judgment, say by a misinterpretation of Scripture by religious Jews, who had custody of the name and lost it. Dare I say wrong, based on the negative.
How do you say the name of God?
Around the fifteenth century Christians started reading literally "Lord" interpreting it as the name of God, when in fact we should have read Adonai.
So although we do not know how to pronounce YHVH correctly, we know that Jehovah is a representation of the name of God, this detail is spared in the RV version. 60 footnotes which reads:

The Masoretes became a standard text and its permanence assured by meticulous rules to be followed:

"The Masoretes added the vowel points the current text, thus helping greatly to the understanding of a text which had only consonants, but sometimes perpetuating erroneous meanings. The extreme care as the text explains Masoretes had advanced the date of our existing manuscripts, as there was no need to retain older copies in poor condition. "

The controversy over the name of God, opened basically three streams between publishers of Bibles:
Those who like the Jews believe that Yehovah should read The Lord (Adonai) as the current language and NIV versions. In order to respect the spirit of the Hebrew Scriptures.
Those knowing this, by tradition and custom still call the Lord God, as the RV versions (Antigua, 60, 95 and RV 97.)
Those who despite not being entirely sure about the pronunciation of YHVH Yhavé write; Yahweh or Yahweh, as versions Peshitta (Syriac, Aramaic translation) and the Jerusalem Bible (Catholic), arguing that it is the pronunciation more likely.

Jehovah's Witnesses began using Jehovah to distinguish from other Christians, evidently due to ignorance of the term was a word created for practical purposes in the Jewish liturgy.

HALLELUJAH (Hebrew abbreviation of YHVH yha). Antigua liturgical exclamation of joy and praise, with which 24 psalms begin, end or both (eg., 106, 111-113, 115-117, 146-150). Originally the singer spoke, the priest and the Levite, and then repeated the village. It is believed that he became a regular call to worship in the temple worship.
For our time again, the Lord taught us a new name:

YHVH is the name that God left us to be known in perpetuity.
However, proper diction and correct YHVH was lost for centuries.
Jews believe that with the coming of Mashiach [7], this will be one of the lost treasures to return to the world.

For we who acknowledge Christ as the Messiah, who have recognized His name and now we are children of God [8], this has been met:

To us it was revealed that the name of Jesus is above every name, and every knee shall bend before him, both above and below in Heaven in Hell [9].
Because the Lord was revealed with a new name for the new time of grace, prophesied by Isaiah (7:14) eight centuries BC

Isaiah 7
14 Therefore the Lord himself shall give you a sign: Behold a virgin shall conceive, and bear a son, and shall call his name Immanuel. (God with us)
Because the Lord was revealed with a new name for the new covenant prophesied by Jeremiah (31.31) seven centuries BC

Jesus is the modern form of Castilian Iesus, which in turn derives from the Greek Iesous, which comes from the Hebrew and Aramaic Yeshua Ishu, derived from Yehoshua which means Yahweh Saves.

Matthew 1
21 And she shall bring forth a son, and shalt call his name Jesus, for he will save his people from their sins.

For the Lord will come for us and for the New Time, we will manifest again with a new name.