The Sons of God and daughters of men. By Fabian Massa.

6 When humans began to multiply on the earth and daughters were, 2 the sons of God saw that the daughters of men were beautiful. Then they married all they wanted. 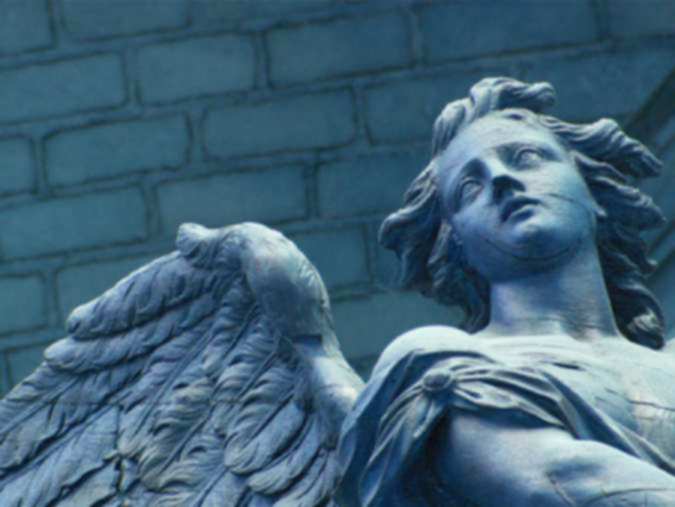 An archaic interpretation of Gen. 06.01
At the entrance of Treasures of Wisdom [1] on 12 Mar 2013, addressed this issue from the differentiation between the Children of God and Children of Men. This time the proposition is from the relationship of the children of God with the daughters of men, considering the "Sons of God" as fallen angels (Although this interpretation is flatly rejected within Christianity).

Both the A. T. as in the N.T. There are references to angels as God's children. In the New Testament we have:

This is found in Jude and the Second Letter of Peter

This interpretation archaic, perhaps akin to ancient Sumerian myths and lost, where celestial beings have children with women (giving as a result of these relationships the birth of beings with supernatural attributes) is common in all mythologies.

The best known examples in our Western culture are the adventures of Zeus with the beautiful land:

At the entrance of the March 13, 2013 of the Week 70 "The woman riding the Beast [12]" recounts the myth of Zeus when he falls for the young Phoenician princess Europa (gr. Old: Εὐρώπη Europe). The myth says that the god Zeus, who wanted her sexually, in order to possess concocted the following strategy: It turned into a beautiful white bull, mingling with the cattle that grazed near where the beautiful girl playing with her maidens. While Europe and his entourage picking flowers near the beach, she saw the bull, caressed his sides and, noticing that he was meek, sat on it. Zeus took that opportunity: he ran to the sea and swam to the island of Crete leading Europe in the back. Already in Crete, Zeus revealed his true identity, and Europa became the first queen of the island. 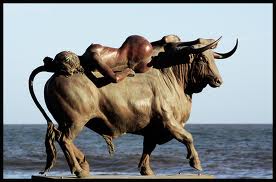 The Queen Alcmene of Thebes

Hercules is perhaps the "Hero" of the world for excellence, a member of the pantheon of Greek mythology. Besides comics, television series and Hollywood adventure film contributed to its popularity. Hercules is the Roman version of Heracles, who was a real historical personage, ruler of the city of Tiryns around 1200AC.
Legend has it that Heracles was born in Thebes, north of Athens city, where they lived Alcmena and Amphitryon. There is also the legend that Zeus reached much the night he was conceived Hercules. He appeared at the palace as the king slept with Host and Almena. The child they had between them, had prodigious strength, of which the legends speak.

She was the daughter of Acrisius, king of Argos. The king had consulted the oracle to see if conceive sons. The oracle replied that a son who would be his daughter Danae and that this would be the cause of his death.
Scared Acrisius would prevent the fulfillment of destiny. For this he built an underground chamber where bronze secluding Danae. Despite these precautions, the princess gave birth to a son, Perseus. The father was Zeus, transformed into golden rain, more subtle appearance, entered the room through a crack in the ceiling and seduced Danae.

Perhaps the best known of God adventure. Leda was the wife of King Tyndareus, situation as we have seen not daunted Zeus. While this was walking along the edge of a lake, Zeus took the form of a swan, with Leda which came in one game, so Zeus possesses. Leda laid an egg, maybe two. Helena and they went out of Castor and Pollux and the other Clitenmestra. It is said that Zeus had with Leda midnight just love.
In the same way that in Greek mythology Zeus's sons were famous women, the Bible says that children who fathered the "Sons of God" with the daughters of men were "men of renown"
4 Joining the children of God with the daughters of humans and had children with them, were born giants, who were the heroes of old famous. Thereafter there were giants in the earth. Gen. 6.4, KJV.

The many parallels between the biblical and pagan myths of different religions, is one of the major causes why this interpretation is rejected by most scholars today.

[1] http://tesorosdesabiduria.blogspot.com.ar/2013/03/los-hombres-y-los-hijos-de-dios-1.html
[2] Star, Strong 792 Aster, and watered the sky. Dictionary Strong.
[3] Read Stars or Angels.
[4] The Book of Enoch (1 Enoch abbreviated) is a intertestamental book of the Bible of the Ethiopian Coptic Church but is not accepted as canonical by the other denominations.
[5] http://es.wikipedia.org/wiki/Ep% C3% ADstola_de_Judas and intertestamental Jewish literature, of G. Perez Aranda, F. García Martínez & M. Pérez Fernández. Ed Divine Word, page 156.
[6] hapax: Words that were used only once in the Greek text.
[7] http://es.wikipedia.org/wiki/Primera_ep% C3% ADstola_de_Pedro
[8] The book "From Eden to the Nations," which I wrote with Adrian Pablos, will be printed by the end of 2013.
[9] This book is considered apocryphal.
[10] The Book of Jubilees, is an apocryphal Hebrew text, pseudoepigráfico, written approx. in 100 B.C.
[11] The Damascus Document was found in a forgotten manuscript repository of an ancient synagogue in Cairo. referring to the history of the Essenes, a sect that opposed the Pharisees and Sadducees circa 200 BC At first he was not given importance, until they were fragmented nine copies of this document from the Qumran scrolls, then it became clear the historical value of this finding. The reason for the opposition, which ended in the Essene Schism, was because the Pharisees priestly caste, the court imposed by oak of Scripture, not practicing forgiveness of debts of the poor to the 7th year and the return of land to the poor in the year of Jubilee (committed by the poor because of their debts). Jesus confronts the Pharisees in Matthew 23 hard. The NIV Archaeological played excerpts from the translation of the Damascus Document by Duane Garrett (page 1646) On page 1645, the same Bible explains: "The Master of Justice (Leader of the Essenes in schism) firmly believed that God had revealed all mysteries prophetic, not only giving authority for the interpretation of Scripture, but also to generate new literary inspired equal with Scripture.
[12] http://lasemana70.blogspot.com.ar/2013/03/la-mujer-montada-en-la-bestia.html