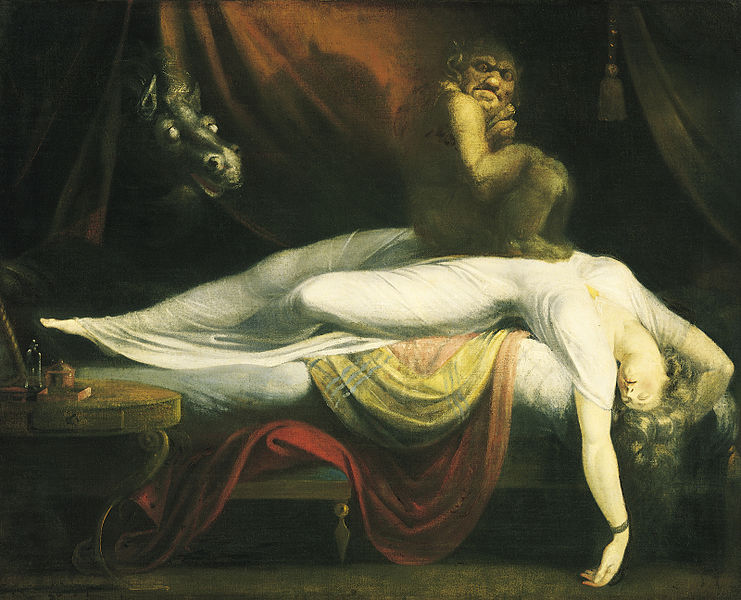 During these months we have seen, different inputs, the issue of relations between the fallen angels and women:

This time, we will see an actual case of Incubus:
Incubus in the XXI Century
A Nicaraguan woman was tricked into marrying a dead

Marbely Blandon, Nicaraguan singer who (photo left.) [9], ensures that for marrying the dead were sexually tortured for eight years by evil forces as happened to a woman in California in 1974, become a movie theme film called “The Entity”.
Nicaragua | Saturday February 6, 2010 | By Nínro Ruiz Peña [10]
With false words of the Moonies, Marbely Blandon, a young Nicaraguan woman living in the city of Leon, was easily duped into signing a pact with the devil in which he married a dead man who then torment her sexually in different ways .
According to this young woman who is now Christian, says two people dressed in white told about a missionary program that would facilitate contact with God, but in fact were members of the Moonies. Blandon’s sister says never told anything about who they were, rather offered solutions to your emotional and financial problems.
The Moon sect members promised his life would change, he would enjoy much peace with the condition to sign a paper. “I had a glass of wine and I took it. Unfortunately, in ignorance, I went to that sect and without realizing I made a pact with the devil “she says.
“According to research I did after, in that covenant I married one dead without realizing it, and to take that glass of wine was celebrating the marriage”, tells the sister Blandon, who revealed that the people who were deceived two women oriental .
Many sexually tormented demons
The testimony of this member of the Evangelical Church Cathedral of His Glory is creepy, and which she was tormented by several demons who took the form of some of his relatives who had already died.
The first time was when he went to bed at 8: 00 pm with the TV and the room lights on, “but in seconds I felt my body went numb, like I was asleep and then I came to make sex I felt that I was hurting, I hit the ribs, I could not move and could not scream. “
The next day the same thing happened, but also we had shadows of people like a nephew who sexually possessed a horrible way. Another day appeared the silhouette of a cousin who is already dead and did the same.
Blandon says nobody put mind and reached viviéndose think I was crazy, I thought it was something she had created mentally because like all artists, trasnochaba and drank liquor and thought he was going crazy. This soon ended the relationship that Blandon had with a person.
Marbely’s brother, Elvis Blandon, realized what was happening and decided to take home to some shepherds the Cathedral of His Glory, who helped him break free of the torment and demonic possessions.
Blandon, with some evangelical pastors learned that the level of possession that came was high. “Following that, I fasted and prayed a lot and asked the Lord to give me the opportunity to defeat the enemy.”
“I treated myself to say I know who you are, or come as you come, but the Lord gave me the power to grab him by the neck and tell andate here, I am a child of God, in the name of Jesus, was of my life! “says Blandon sister.
Blandon claims to have been sexually tormented by evil forces eight years, as happened to a woman in California in 1974, an issue that was brought to the big screen in the movie “The Entity”.
THE  ENTITY

This film is based on a real life story. It starred Barbara Hershey, she played named Carla Moran.
This woman was the victim of an Entity, which the repeatedly raped. The attacker could not be seen with human eyes. It is known from ancient records that sexual attacks on women by paranormal beings were happening frequently and were attributed to incubus [11], demons that have great love for human females.
The real story
By 1974 the department of psychiatry at the University of California heard the case of a woman (Carla Moran) who claimed to have been repeatedly raped by an invisible being.
In an interview with the victim in question had with professionals Barry E. Taff and Kerry Gaynor told them great distress dam how their experiences with this individual. According to him every night in his bedroom was possessed “carnally” and against their will by an unknown entity in addition to raping her repeatedly beat her all over her body and lacerated his genitals.
As expected specialists initially attributed the story to women’s mental disorders, but after this review was changing course. The bruises found they could in no way have been caused intentionally by it or could be explained scientifically.
Because of the magnitude of the injuries and enigmatic story, both taken more seriously and decided to investigate the case thoroughly.
Extensively interviewed the woman, his children and relatives to collect even the smallest detail of the story, and to his surprise all the respondents agreed and said they witnessed at one time the scourge Ente favored the victim.
As the psychological skills showed that Carla was emotionally stable and not suffering any psychological disorder is subjected to a hypnotic regression in the hands of a specialist in the field, Kerry Gaynor. Unfortunately none of the sessions that were unable to provide data relevant to the case.
After extensive scientific research equipment was installed at the home of Carla to document the attacks. During his stay glimpsed Orbs (balls of light) constantly surrounding the woman, which went captured in several photographs, witnessed strange events, saw very rapid bursts of light, so they were unable to photograph with the team that had by that time.
Also when I spoke with the eldest son of Carla in the kitchen of the house, opened a cupboard and she shot out a pan, seconds later the woman began shouting “this in the bedroom”, both researchers attempted to photograph the body and obtained an image in which the torso is Carla but his face is deleted, the photo took when she said “this in front of my face.”
The third night that investigators spent at home They experienced the most startling appearance, a light came out of the wall and expanded in the middle of the room in all directions. The researchers reported that they could see an image that resembled dimensional three round lights, one green and two white yellow.
Carla said that the attacker was a man, or at least had one anatomy and is sometimes accompanied by other creatures that hold him responsible for his legs as he entered her.
Without reaching a conclusion or make stop attacks, scientists did not know what else to do, Carla every day was more and more ill and mental health was on the line. As much as they tried, psychiatrists and exorcists failed to release the being that possessed daily. The constant sexual assault made her three pregnancies suffer psychological trauma in addition to countless every attack had on his mind and that of his family.
Desperate Carla moved to the laboratory of the University of California where he lived in a glass house specially designed for her, was monitored by security cameras and had constant surveillance, but still The Body I can find it and achieve its mission.
The first night I was raped within which witnessed the event could be seen as the woman’s body writhed, moved and raised as if anyone really take her sexually, but they could see that being. Despite compelling evidence, some of the doctors involved in the case was continued to believe that Carla prey to their own traumas since during hypnosis came to light the fact of sexual abuse which had suffered as a child.
Carla and her family moved to Texas in hopes of finding peace and no more was heard of it, only rumored to continued attacks as ethereal abuser knew exactly where to find it.