Constantine the Great and Christianity.

Constantine Monument in the city of York.
The Roman Emperor Constantine, called the Great, was born in the city of Nish [1] February 27 272 and died at age 65 on May 22, 337, in Pontus. Son of Constantius, to his death he was elected Caesar troops from July 25 to 306.
At the beginning of the fourth century, the Empire was ruled by a tetrarquía:
a. A Caesar Augustus and the Western Roman Empire
b. A Caesar Augustus and the Eastern Roman Empire: It covered Bretania, Spain and Portugal, France, the Netherlands, Holland, Belgium, Italy, Corsica and Sardinia, Malta, all of North Africa [3].
Flag of the Western Roman Empire. [2] It is also the image that Constantine used on the shields of his army (Labarum).

Since the beginning of the Tetrarchy in 305 until the unification of the empire under the absolute rule of Constantine in 326 passed 29 years of wars, intrigues, murders, betrayals and endless dramas. Constantine represents the birth of absolute monarchy by divine right hereditary. During his reign he introduced important changes affecting all levels of society in the late empire. Court reformed the laws and structure of the army. Constantine moved the capital of empire to Byzantium which renamed it Constantinople. He died, of disease in 337, 31 years after he was named emperor in Britain. At the end of his life and just before he died was baptized to die as a Christian. 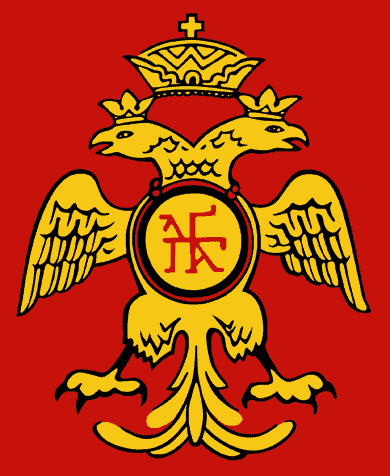 Mithras killing the bull.
The Cult of Sol Invictus in the Roman Church
The Unconquered Sun symbol is present in the worship of the Catholic Church:

[1] Niš (Serbian, Ниш, Latin Nish, Nish sometimes transliterated as) is the third largest city of Serbia. It is situated on the river Nišava, Serbia Located on the Balkan peninsula in southeastern Europe, according to its constitution borders Hungary to the north, with Romania and Bulgaria to the east, Macedonia and Albania to the south, and Bosni and Herzegovina, Croatia oeste.Su and Montenegro to the capital and most populous city is Belgrade.
[2] http://es.wikipedia.org/wiki/Imperio_romano_de_Occidente
[3] http://es.wikipedia.org/wiki/Imperio_bizantino
[4] The Catholic Apostolic Orthodox Church is a Christian community, whose antiquity traditionally goes back to Jesus and the twelve apostles through apostolic succession never interrupted. It is the second largest Christian church in the world after the Roman Catholic Church. It has over 225 million members worldwide. The Orthodox Church is considered the heir of all the Christian communities of the eastern half of the Mediterranean and sometimes clashes with the Catholic Church. You can see that the old rivalry between the Eastern Roman Empires and West continued between the two Churches. The Orthodox Church is composed of 15 autocephalous churches that recognize only the power of their own hierarchical authority (eg, the Patriarch of Alexandria, Antioch, Constantinople, etc..), But keep each other doctrinal and sacramental communion.
[5] In the name of Ancient Eastern Churches are grouped all jurisdictions that were excised from the body of the Church to reject the Christology issued by the Ecumenical Council of Chalcedon in 451. Also known as the Eastern Orthodox Churches and who call themselves Orthodox, because usually keep the most primitive liturgical traditions of Eastern Christianity, but they should not be confused with the Orthodox Church which split in the Great Schism of 1054, six years later. Generically, the Churches of the three councils are also known as the Churches are the historical family of the Oriental Orthodox Churches Monophysites are distributed among various cultural traditions and are divided into several churches.
Churches Coptic tradition: Coptic Church, Coptic Church of Alexandria Coptic Church Ethiopian, Eritrean Coptic Church
Churches Syriac tradition: Syriac Orthodox Church, Syro-Malankara Orthodox Church, Malankara Orthodox Church, independent Malabara Church, Orthodox Syrian Church francophone.
Armenian tradition Churches: Armenian Apostolic Church.
[6] The Greek Byzantine Catholic Church is one of the Eastern Catholic Churches sui iuris (in its own right, ie autonomy to judge for itself), in full communion with the Holy See of the Catholic Church.
[7] http://www.tesorosdesabiduria.com/2013/05/persecuciones-los-cristianos-en-los.html
[8] The Edict of Milan known as tolerance of Christianity, which established freedom of religion in the Roman Empire, ending the persecutions directed by the authorities against certain religious groups, particularly Christians.
[9] The purpose of this council should be to establish religious peace and build unity of the Christian Church.
[10] In the early Church this was done with great care and ceremony: To those who want to be Christians, the bishop laid hands and blessed that God gave him to the graces of a Christian. The catechumenate could last two years, depending on the progress of the believer, both in knowledge and in their life changes. In the case of Constantine, took his time, being baptized shortly before his death, having lived a life full of situations “wrong” from the Christian point of view. The catechumens were distinguished from the faithful not only by name but by carrying their place in the church. With penitents were under the porch or in the gallery above the basilica. They were not allowed to attend the celebration of the holy mysteries, but immediately after the instruction of the gospel and the deacon told aloud: Ite, catechumeni, missa est; retire, catechumens, is commanded to leave. This part of the Mass was also called the Mass of the catechumens. Apparently, a canon of the Council of Orange not allowed to pray with the faithful were given holy bread, called for this reason catechumens bread as a symbol of communion, which may be admitted on .
[11] a god Mithra was known in antiquity, mainly in Persia and India. Mithra was the sun god of Persian origin that became part of the Roman Empire. Various sculptures are preserved, for the most part of the third century. He is depicted as a young man, wearing a Phrygian cap, killing a bull with his hands. During the Roman Empire, the cult of Mithra was developed as a mystery religion, and was organized in secret societies, exclusively male, esoteric and initiatory character. He enjoyed particular popularity in military environments. He forced honesty, purity and courage among its adherents. Excavations started in 1857 under the church of San Clemente in Lateran (Rome) showed that it was built on a Christian church in the fourth century, and this in turn over a temple dedicated to the god Mithras. For the archaeological finds is known to be a religion of Persian origin, adopted by the Romans in the year 62. C., which competed with Christianity until IV.http century :/ / es.wikipedia.org / wiki / Mitra_ (dios_romano)
[12] https://es.wikipedia.org/wiki/Constantino_I_ (emperor)