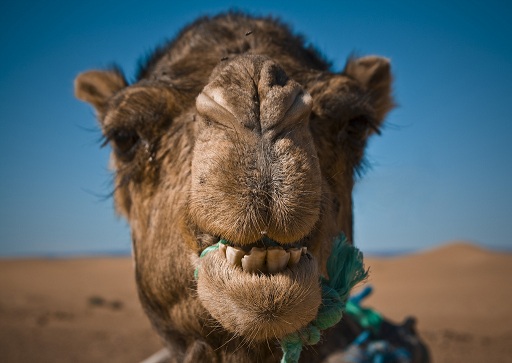 Some time ago, having coffee with a friend surprised me with a request:
"... I could write something about the Camel"
Without hesitation I said yes, he would be happy. But, but I thought to myself: My God, I do not know about camels!


I had already committed, so I started by two basic actions:

a. Pray: God As is taught to do when we need answers
3 Call to me and I will answer thee, and shew thee great and mighty things which thou knowest not. Jeremiah 3.3
b. Research in the Bible, in books and the Internet:

It is very important the fact of Gen. 2.19. In the post "The Chef [2]" see God doing all creation with the same common elements: iron, calcium, phosphorus, oxygen, hydrogen, carbon, etc. ... So both the stars, men and animals have common elements in our constitutions.

In contrast to the theory of evolution (which states that animals evolve from one species to another) the Bible says that God made each animal according to its kind:

24. God said, "Let the land produce living creatures of every kind: cattle, snakes and vermin terrestrial species." And so it was.
25. And God made the beast of the earth of every kind, and the cattle of every kind, and every tiller of the soil of each kind: and God saw that it was good [3]. Gen. 1. Jerusalem Bible.

I understand it is as the Bible says, but not only as a matter of faith, but by logical deduction, I mean: While it is scientifically proven that all living things are adapted to the environment, the organism producing small "adjustments" to be more functional in the environment (temperature, air pressure, type of food, etc.) in animals there is a theme of "functional design" according to the communities where they operate that is obvious to all, believers and non-believers. 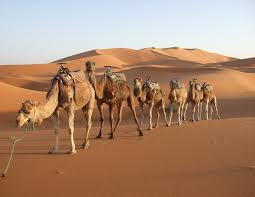 Look Camel color is like wet sand mixed with soil, as if the Lord when he did have mixed the mud of Eden with a handful of sand in the desert. And, like the sand, the Camel has the ability to absorb water and keep it hidden within. The camel stores water and fat in their humps, allowing you to travel long distances in the desert without food or water need replacing.
Your skin exudes a scent that repels venomous desert critters such as scorpions and other bugs. Besides creating a thermal barrier against heat of day and cold at night.
I also recalled having between its legs fingers skin membrane that gives greater tread surface, so that they will not sink in the hot desert sand and allowed to run at high speed.
This I know well the Australians, who organized Camels and Camel racing in the same way as in other countries are racing Horses and Greyhounds.

His eyes are protected from light reflection and sand with a thick and long eyelashes eyelid, also having a second inner membrane protective sand storms.

They have a very fine sense of smell with which they can smell water over long distances. More of a Son of Ishmael saved his life in the desert because his Camel found water.

Therefore, I think that rather than being adapted to the desert, the Lord did for the same, to serve his purpose. So blessed him with the rest of creation: 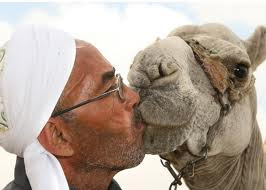 And God not only blessed, but also men who saw the Camel the best means of carrying loads, people and war horse. Today Bedouins, Knights of the Desert, transporting and trading are the deserts of Iraq and Iran in long caravans of camels.

Yes, He did, because so it pleased:
3 All things were made through Him, and without Him nothing was made that was made. John 1, RV 60

The Camel is a success of God, it is the work of the Word of God, the Word of God, which expresses the Will and Love of the Father. The Love of God is revealed in every detail of His creation and the proof is that you take the trouble to think about every thing the Camel might need to thrive and flourish.

I believe the Lord to live in difficult terrain and hostile to life, giving you everything you need for your success, from the Creation to the end of time.

The Camel is an animal perfectly adapted to living in the desert and I believe He did Lord thinking where you would live.

God says about His Word:
10 For as descended from the heavens the rain and snow, and do not return there but water the earth, and maketh it bring forth and sprout, giving seed to the sower, and bread to the eater,
11 So shall my word be that goes forth from my mouth shall not return to me empty, but will accomplish what I please, and it shall prosper in the thing for which I sent it. Isaiah 55, RV 60

The Lord has provided the camel than necessary to thrive in a totally hostile. and also to be a blessing for hombres.Y if this God did and does the Camel

DO NOT MAKE THE SAME OR EVEN MORE by us only?

PERHAPS NOT GAVE HIS ONLY BEGOTTEN FOR LOVE FROM U.S.?

WILL WE? WITHOUT PROVIDING OUR DESERT THAN NECESSARY?

NOT worth more PERHAPS WE CAMELS IN THE EYES OF THE LORD?

Friends have faith, God will not leave us helpless, but will give us the tools we needed to do develop.