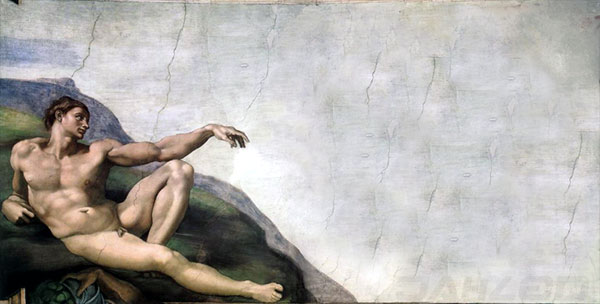 A symbol of agnosticism, take God out of the picture of Michelangelo: A humanity without God.

Agnosticism (from the Greek a = no and gnosis = knowledge) [a]
It is a philosophical stance for the agnostics that to which no access to knowledge, does not exist or exists but is not affected or interested. Within agnosticism you can see two different postures dial level (strong and weak, see footer).

"Those who profess to not be anti-religious agnosticism, being respectful of all faiths to come from an individual reflection and honest, not selfish interest, hopelessness or peer pressure. The agnostic faith understood only as a personal choice of each individual, that he does not share. " Among the most famous agnostics (in the original sense) are Thomas Henry Huxley, Thomas Alva Edison [b] Charles Darwin [c] and Bertrand Russell. From Wikipedia, the free encyclopedia.

An example of how you think an agnostic:
Bertrand Russell [d] in his pamphlet: Am I an atheist or agnostic? (Subtitled "An order of tolerance to new dogmas"), he confirms that he is an agnostic in the philosophical sense that he can not believe the truth of the existence or nonexistence of God. However, in the same essay admits that the clearest way to present to an audience not be an atheist philosophy. From Wikipedia, the free encyclopedia

Letter from Henry Huxley [and] to Charles Kingsley [f] of September 23, 1860. (From Wikipedia, the free encyclopedia).
I do not affirm nor deny the immortality of man. I see no reason not to believe it but I have no way to disprove it. I have no a priori objections to the doctrine. No one who has to deal daily with nature can get in the chute of the difficulties a priori. Give me some evidence to support my belief on anything and I'll believe. And how should I not believe? It would be more wonderful than the conservation of energy or the indestructibility of matter. [...] It makes no sense to talk to me of analogies and probabilities. I know what I mean when I say I believe in the law of inverse squares, and not base my life and my hopes on a weaker belief.

I do not affirm nor deny the immortality of man: It takes a commitment to any position that involves what we call faith. The agnostic has to see to believe: Give me some evidence to support my belief on anything and I'll believe. For the agnostic, there is only what you know and there is nothing more important. It would be more wonderful than the conservation of energy or the indestructibility of matter. [...] It makes no sense to talk to me of analogies and probabilities. I know what I mean when I say I believe in the law of inverse squares, and not base my life and my hopes on a weaker belief.

Agnostics are usually people with a high sense of ethics and comply with many of the laws of the Lord out of conviction, by dictates of his own conscience:

14 For when Gentiles who have not the law, do by nature the things contained in the law, these, having not the law, are a law to themselves,
15 show the work of the law written in their hearts, their conscience bearing witness, and their thoughts accusing or else defending. Romans 2
As defending the faith against an agnostic:

"Give me some evidence to support my belief in anything and I believe": this statement is a veiled request and expressed a need hidden underneath all that self-sufficiency, a cry of despair drowned under the guise of "I have everything under control", this saying, "Give me some proof to convince me to believe. Please help me to believe it!

23 Jesus said unto him, If thou canst believe, who believes all things are possible.
24 And immediately the father of the child cried out and said, I believe, help my unbelief. Mark 9

As the father of Mark 9.24 Henry Huxley in the privacy of his soul (although openly acknowledge forbid) need to believe, to have a hope that those things which he can not get, or change there an omnipotent, omniscient who can and wants to do.

All men need to have a relationship with the Creator.

[B] Thomas Alva Edison (USA, February 1847 - October 1931) was an important inventor and businessman from the United States. Edison perfected the incandescent filament system (which then allowed the industrialized manufacture of the first electric light bulb) getting his first bulb shone for 48 hours straight. In 1880 he associated with J. P. Morgan to found General Electric. With your ideas and inventions made important contributions in the film industry, radio and electricity.

[C] Charles Robert Darwin (England in February 1809, England - April 1882), British biologist. He laid the foundations of the modern theory of evolution, to introduce the concept of evolution of species through a slow process of natural selection. This theory reigned until he was finally overthrown by the advance in the study of the genomes of living organisms.

[E] Thomas Henry Huxley (London, May 1825, England, June 1895) British biologist, supporter of the theory of evolution of Charles Darwin. Huxley used the term 'agnostic' to describe his own view of religion, a term whose use has been continued to the present day. Agnostics defined as people who deny both atheism and theism and say that you can not find an answer to the metaphysical question of the existence of a higher power or God.

[F] Charles Kingsley (Holne, 1819-Eversley, 1875) British writer. He was one of the founders of "Christian socialism" and the most representative of the English social novel s. XIX. He was chaplain to Queen Victoria and canon of Westminster. The author of a prolific works (sermons, articles, propaganda), which emphasize his thesis novels (Yeast, 1851), historical novels (Westbound, 1855) and children's stories (Children of water, 1863) .