Study. Noah in the Bible, by fabian Massa. 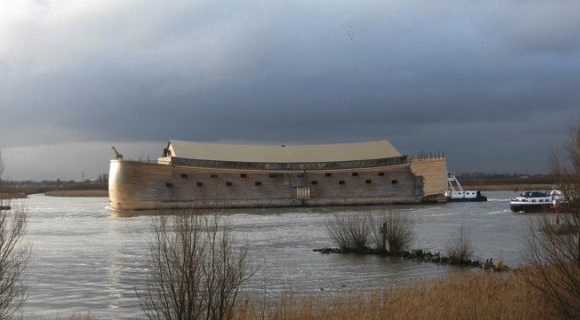 This post is part of "From Eden to the Nations" Pablos & Fabian Adrian Massa, which will be released end of 2013.

1. In the Old Testament
Noah was appointed him four times in the OT out of Genesis:
In 1 Chronicles 1.4, also mentioned his three children.
The second mention is in Isaiah 54.9 where God recalls that he vowed never again will the waters of a flood happen again on earth.
A third mention we place in Ezekiel 14.14, where the Lord returns to declare righteous Noah, along with Daniel and Job.
Finally, the fourth again in Ezekiel 14.20 which re-emphasizes what is said in Ez. 14.14

2. In the New Testament
In N.T. is mentioned in Matthew, in Luke and in the letter to the Hebrews:
a. In Mt 24.37 -39 and its parallel in Lk. 17.26 and 27:
37 But as the days of Noah, so shall also the coming of the Son of Man. 38 For as in the days before the flood they were eating and drinking, marrying and giving in marriage, until the day that Noah entered the ark, 39 And knew not until the flood came and took them all away, so also the coming of the Son of Man. RV 60. Jesus explains that in the Day of His 2nd Coming will be like in the days of Noah, they lived carelessly until it started raining and Noah's Ark closed, and when humanity realized it was too late and the end was inevitable. Jesus unfortunately we anticipates that the same thing will happen again, which is not prepared, you will lose.
b. In Heb. 11.7, the author takes up the subject and says: By faith Noah, being warned of God of things not yet seen, moved with fear, prepared an ark to the saving of his house, and he condemned the world, and became heir of the righteousness that comes by faith. (RV 60). The author of Hebrews emphasizes Noah as a man of faith, believing God's Word. By his faith God appointed heir of justice.
c. In 2 of Pe.2.4 - May the Greek text says:
4 God did not spare angels when they sinned, but cast them down to Tartarus, and delivered them into chains of darkness, reserved to the Juicio.5 And spared not the old world, but saved Noah, the eighth preacher of righteousness, bringing a deluge upon a world of ungodly. Novum Testamentum Graece [1]
The apostle here quotes three points:
· The sin of the angels consisted abandon his position or spiritual nature to take a Natural (Jude 1.6) taking the "daughters of men" and having sex with them, giving these birth to the race of the Nephilim. William Barclay links this passage with Gen. 6.1 - 5 and the Book of Enoch [2]. This is necessary to examine two words: Peter says that God condemned the angels that sinned to remain in the deeper regions of Tartarus (hell). The Tartar (Tartarus) is not a Jewish but Greek. William Barclay says that in Greek mythology Tartarus is the lowest hell, is so low compared to Hades [3] as is the Earth to the Sky [4].
• Sin of men live in total disobedience of God's commands.
· The rescue of the righteous Noah.: Amid a society steeped in evil and injustice, Noah was a righteous man who preached for salvation, but obviously no one would believe him apart from his immediate family (wife, sons and daughters, seven people).
God did not spare angels when they sinned, As a first step it is noteworthy that God chained Angels that sinned to Tartarus [5], a Greek word reflected in deepest hell concept. The fallen angels were then locked up in prisons Hades deeper in Hell. There are several texts that speak of the fallen angels, his sin, his arrogance and his end: In his book Antiquities (1.3.1), Josephus says: ... (the fallen angels) were arrogant and scornful of everything good and only relied on their own strength.

Deuterocanonical texts and apocryphal also touch on Genesis 6.1 - 6 (Enoch and Jubilees) reflect Jewish thought on the subject: The sin of the fallen angels, evil, pride and haughtiness of the Nephilim (fruit of sexual unions of Grigori with the daughters of men) whom perished for lack of discernment, perished for their foolishness as Baruch 3.26.

References to angels on canonical texts
4.18 Job 18HE here that (God) does not trust in his servants, and his angels he charged with folly. King James Version. Job Already in reference given to some of the angels were not so trustworthy by the Lord.
1 Corinthians 11.10 10 For this reason, and because of the angels, the woman ought to have on her head a sign of authority. (RVC) could be interpreted, that the recommendation of Paul to cover women [7] her hair, (hiding the look of the angels) is to ensure that none of them will become tempted to do the same as Rangers Genesis 6. Until today, married Jewish women hide their hair under a scarf or a wig, reserving her beauty only for the eyes of her husband.

We follow Peter's reference to Noah's 2nd Letter:
Novum Testamentum Graece 2nd Peter 2
5 And spared not the old world, but saved Noah, the eighth preacher of righteousness
Since no other Biblical reference to Noah as a preacher of righteousness, the same must necessarily be extra-biblical, in this respect the NIV Study says: "The stories about Noah, how the fallen angels were popular in Judaism Rabbinic no. "

God speaks to Noah because he walked in His ways (Gen. 9.9) then God tells Noah in Gen. 6.13 -16:
13 'The end of all people, for the earth is filled with violence because of them, and I will destroy them with the earth. 14 Make thee an ark of gopher wood; make rooms in the ark, and coat it with pitch inside and out. 15 Thus shall make it: three hundred cubits shall be the length of the ark, fifty cubits wide and thirty cubits high. 16 Make a roof for the ark, finish it to a cubit from the top and next set the door of the ark shalt thou make it three floors. RV 60

We have made a tremendous description of the wickedness of the Nephilim and all mankind (man's thoughts are evil continually, Genesis 6.5) at the end of Chapter VIII, on the injustices, evil, sexual depravity and cannibalism. About this same William Barclay says in volume 14 of his Commentary on the New Testament:
Those Giants ... (Nephilim) became cannibals and were guilty of all kinds of lust and crime, especially the insolent arrogance before God and men [10].

[1] The Novum Testamentum Graece [1] ("New Testament Greek") is the title of a critical edition of the Greek New Testament prepared by Eberhard Nestle and Kurt Aland, published by the Institut für neutestamentliche Textforschung ("Institute for Research on the text of the New Testament ").
[2] N. Commentary T. William Barclay, page 1022.
[3] The word "hades" in Christian theology (and in New Testament Greek) is parallel to Hebrew sheol
(Tomb 'or' dirt pit), and refers to the abode of the dead. The Christian concept of hell is more like the Greek Tartarus, deep, gloomy part of hades used as a dungeon of torment and suffering. The Hebrew reference is Gehenna.
[4] N. Commentary T. William Barclay, page 1022.
[5] The Greek Tartarus is both a place in hell as the god that governs it, the mention of it in the writings of Peter does not imply that the thought or surrendered worship mythological Greek. Peter mentions Tartarus as an illustration, because it is a concept that Gentiles is very clear. Recall that all the known world at that time was under the influence of Greek culture, for 300 of its domination and then their culture and religion were adopted as their own by the Roman Empire.
[6] Bible of the People of God. See note in Appendix. The Catholic Bible is based on the Canon Greek words in the LXX (see note in Appendix) deuterocanonical texts of the LXX and the Apocrypha were popular in the first century the Jews.
[7] Among Oriental peoples woman's hair is one of their most tempting.
[8] Clement of Rome and St. Clement I, was a religious Christian late I, bishop of Rome, and as a bishop of the Eternal City, the Catholic Church considers it her 4th. Pope.
[9] The Sibylline Oracles are a collection of 15 books that try to put in the mouth of the Sibyl, or prophetess important guesses of antiquity, a series of prophecies intentional. Collect text from the second century. C. to the V century and possibly were made by Hellenistic Jews and Christians. They are characterized by using an important character of the pagan religion, the Sibyl, to attack paganism itself and announce their purpose.
[10] James and Peter I and II, page 364. William Barclay.