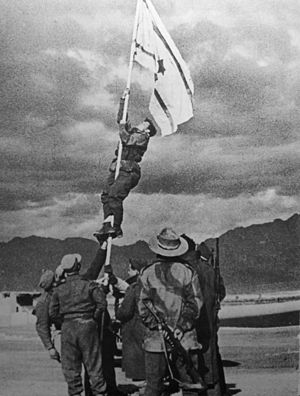 The nation of Israel was divided into two at the end of the reign of Solomon in 930 a. C.:

The Northern Kingdom was destroyed and its inhabitants carried into captivity by the Assyrian empire in 721. C.

The Kingdom of Judah continued until 607 BCE when Nebuchadnezzar conquered the whole region and carried the people away into Babylon:


... By then went up to Jerusalem Nevujadnetzar the servants of the king of Babylon, and the city was besieged ... And he took all Jerusalem, and all the princes, and all men of valor, ten thousand captives in total, and all the craftsmen and smiths. None remained except the poorest people of the land ... And the king of Babylon made Mataniahu, his father's brother, king of the place and changed its name to Tzidkiahu. (Melachim-Kings-11 24:10-17)

In 537 B.C. under the rule of Cyrus, was authorized to return to Jerusalem of the Jews who so wish to do so, under the leadership of Nehemiah [1] and Ezra [2].

Since then the territory was a province that went from Empire to Empire unable to recover their identity as independent nation. But God had promised to Israel through his prophets:

Restoration of Israel
11 "In that day I
David's fallen tent.
Mend the cracks,
restore its ruins
and rebuild as it was in days gone by,
12 That they may possess the remnant of Edom
and all the Gentiles who bear my name
Declares the Lord,
that will do these things.
13 "The days are coming, declares the Lord,
"In which the plowman shall overtake the reaper
and the treader of grapes, the sower.
The mountains shall drip sweet wine,
which flow on all the hills.
14 I will restore [c] my people Israel;
they will rebuild the ruined cities
and live in them.
Plant vineyards and drink their wine;
gardens and eat their fruit.
15 will plant Israel in their own land,
so that never again be uprooted
of the land that I gave "
saith the Lord your God. Amos 9.11 - 15 NIV.

2. The Restoration of Israel and the War of Liberation.

In 1947, the United Nations established a plan for dividing the British Mandate of Palestine into two states, one Jewish and one Arab, leaving Jerusalem and Bethlehem under international control. The Arab countries and the leaders of the Palestinian Arab community rejected the plan and attacked the newly created state of Israel on the day of its proclamation, leading to the Arab-Israeli War of 1948, which ended with the victory of the Israelis, their definitive independence and expanding the borders of Israel. For its part, Egypt took control of the Gaza Strip and Transjordan occupied the West Bank and part of Jerusalem (renaming the country by the name of Jordan) [3].

Israeli forces:
Israel had formed a regular army had no artillery and combat vehicles. His strength was the Haganah (Hebrew: ההֲגָנָה defense) [4] In total there were approximately 35,000 soldiers of which one third were armed. But Israel defeated all his enemies, though they were at a tremendous disadvantage from every point of view. But God was with them in the same way he was with Gideon [5]

3. The Victory of God to Israel.

In 1949 Israel signed armistice agreements with Egypt on February 24, with Lebanon on March 23, with Transjordan on April 3 and Syria on July 20. After the war, Israel increased its territory by about 23% more than originally allocated by the United Nations. The Gaza Strip and the West Bank were occupied by Egypt and Transjordan respectively.
The final agreement between Israel and Syria ended the war. Israel had been victor. The Jews not only remained in the area were granted in the 1947 partition plan, but expanded in the 5,728 square kilometers, imposing his mastery over 20,850 square kilometers.
Victims
Israel lost about 1% of the total population: 6373 people. About 4,000 were soldiers and the rest civilians.
The exact number of Arab losses is unknown, but is estimated to hover between 10,000 and 15,000. [6]

God prospers His Word to fulfill His purpose. Israel will remain on their land because the Lord hath spoken it. In the same way, every one of His promises to those who take it in faith will be fulfilled. Trust in the Lord and He will.