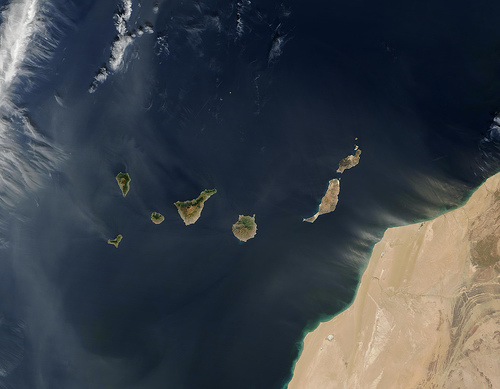 The Canary Islands, satellite view. You can see the coast of Africa and as a sandstorm goes into the ocean.

The last day, also called Four ways to end the world, is a BBC documentary in which four scenarios of global destruction or "end of the world [1]."

It is a fiction in which a scientist, Dr. R. Howell, goes on a trip from London to New York. Throughout the trip will unleashing four World Disasters:

1. A Megatsunami
2. An Asteroid impact on Earth
3. A Global Pandemic
4. An accident at the Particle Accelerator ends up creating a Black Hole devouring the planet

You might think that this report was a novelty, but the first three of these events are clearly posted in the book of Revelation.

8 The second angel sounded his trumpet, and was thrown into the sea something like a huge mountain, all ablaze. The third part of the sea became blood, 9 and died the third part of the creatures that live in the sea was also destroyed a third of the ships.
NIV Revelation 8.8.

On the island Palma de Mallorca Canary Islands group, is the volcano (now "asleep") Cumbre Vieja, this mountain has a vertical crack across through it entirely. In 1949 the eastern face of the mountain (which faces the Atlantic to the East Coast of North America) moved three feet to the ocean, stabilizing at the current position. If this part of the mountains fall into the sea, cause a megatsunami would seriously affect the lives of millions of people.