STUDY . What came first, the egg or the chicken? By Fabian Massa. 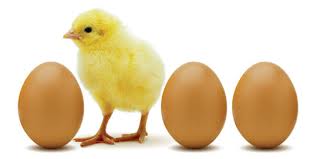 Popularly , this saying applies to situations where you can not define what it is first . And even though it seems a nonsense , is a complex question because its two possible responses involve a different worldview .

I. If we say the egg is first, we are endorsing evolutionary theory (the universe come from nothing and evolves by natural selection )
II. If we say that the chicken is first , we express our creationist belief ( that God made ​​all things )

Aristotle ( 384 to . C. -322 a.) Stated that there was first the chicken.
Plutarch ( 46-126 ) made ​​a comparison of the dilemma with the creation of the world.
Macrobius ( 395-423 AD ), stressed the importance of the issue .
Stephen Hawking and Christopher Langan , concluded that the egg came first the gallina.5 Langan presented a detailed study of the problem in 2001 .
David Papineau , academic philosopher at King's College London , says that it was first the egg.

Scientists at the University of Warwick and the University of Sheffield (England ) have concluded that there was chicken before the egg because a protein found in the ovaries of hens , the ovocledidina -17 ( OC- 17 ), plays a key role in the formation of the eggshell. No hen no OC- 17 protein without this there is no egg.

Elementary Watson, the chicken is first! ! !

The finding , they say, is sufficient evidence to determine not only that the chicken came before the egg , but also that the first chicken possibly not born from an egg of the same species .

What does the Bible say?

According to the Bible , were all trained in the mud , so we all share basically the same chemical composition organic ( carbon based ) and we have the same minerals , metals and non- metals found in the soil of our planet and the universe . [2]