Study. A brief reflection on the Book of Job. By Sergio Bodo 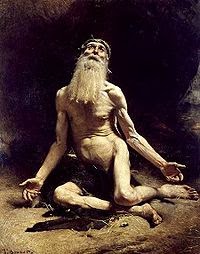 Job could say that presents Christ as our Redeemer , " I know that my redeemer liveth, and that he shall be my lawyer here on earth " ( 19:25 NIV version ) . Job sees him as the " Goel " , which is the kinsman redeemer and not a distant God and strange.

The book takes its name from the main character, Job. It is not clear the meaning of the word " Job" , although some scholars think that means " object of enmity " or "the returning ( to God ) " . Should be considered merely as a common name back then and meaningless.

Most obvious theme of the book of Job: Suffering from right

There are indications that lived Job in patriarchal period and perhaps was contemporary of Abraham. Alusi6n No one in the book to life and misi6n of Israel , the covenant , the tabernacle and the priesthood. We will see the patriarchal conditions in which the family is the social and communal .
Like the patriarchs described in Genesis, Job and Family head priest and intercessor serves .
Worship is limited to its most primordial religious rites in a simple way (see 1:5, 42:8 ) .
All this presupposes a time prior to the organization of Israel as a nation.

The reference to cattle as wealth of Job, also seems to indicate the time before the founding of the great empires in Mesopotamia. If it was written in that period , is the oldest book of the Bible .

Being a gentle , Job vivi6 , suffered and triumphed outside of Canaan . Although the Bible mentions the land of Uz ( Jer 25:20 ; Lm 4:21) , its location is uncertain. Some scholars tend to consider was south east of Palestine , in the confines of Arabia and the country of Edom , whose sages were famous in antiquity. However, this great drama happened at a place and time not known by legislators, priests and prophets of Israel.

The elements that give coherence to the book of Job, are: the omnipotence of God and the innocence of Job.

The author is unknown . According to Talmudic tradition , was written by Moses , but the continuation of the passage in which the rabbis attributed to the great lawgiver and other statements of the Talmud show that this observation is only a guess pious . Other suggestions for the author are: Job, Elihu , Solomon , Isaiah , Ezekiel, Baruch (friend and scribe of Jeremiah ) or a wise pre-exilic period .
Two prestigious conservative scholars , Franz Delitzsch and Edward J. Young, believe that it was written in its final form at the time of Solomon . This theory is more satisfactory because it reflects the spirit of the sages who reigned at the time. While not actually know who wrote the book of Job.


What three things we know about the author?

It was Hebrew or Israelite (2) defended the pure monotheism and (3) his faith in the Almighty and just was unmoved.

Job qualify to his friends as " comforters" ( 16:12). Not enough to know great biblical truths . The words of the Bible without the love of God , can be an instrument to strike , hit and hurt , instead of save , restore and heal

Who were the three friends of Job who came to comfort him ?
Eliphaz , Bildad and Zophar .

According to Eliphaz , how should be the suffering and what is its purpose ?
It should look like the punishment that God uses to correct and heal.

After the three friends have spoken , what is the situation of Job?
Job has been banished from the presence of God and of men in a friendly universe . He is forced to face alone loneliness, or so it seems .

What is the only thing that gives semblance of reality to the situation of Job?
Job 's conviction that he is innocent .

What wisdom say about Job and his friends ?
Job says that wisdom is found only in God and that the three friends do not have one iota of it. The three friends insist that you are imparting wisdom to Job while talking with him.

In the first exchange , the means proposed universal principle , the principle is that the universe operates according to the law of cause and effect, ie , that things do not happen without a reason.

In 1 | ° | cycle Job's friends try to convince him that God punishes or rewards .
Job speaks to God and friends from Chapter 3

In 3 | ° | Cycle Three dialogue, was how different the once gentle Eliphaz ?
Recapitulated the arguments of his first speech , and did so with enough sarcasm and added slander, here Zophar does not speak.

Why the young Elihu was angry ?
He was angry with Job because " is justified before God " and was angry with the other men because they had not achieved a response of Job even when he was told he was wrong.

What Elihu believed about God ?
May God send suffering to human life for discipline and correction .

How Job answered the two speeches of God?
After the first speech meekly responded , conceding that he was unable to respond to God . After the second speech , he recanted and never granted
could understand the whole mystery of the moral universe .

What does the epilogue of God?
Beyond the righteousness of God revealed His love , His forgiveness and His benevolence.

In defending his own integrity, he defended what else Job?
The integrity of God.