STUDY . The Flood. By Fabian Massa. 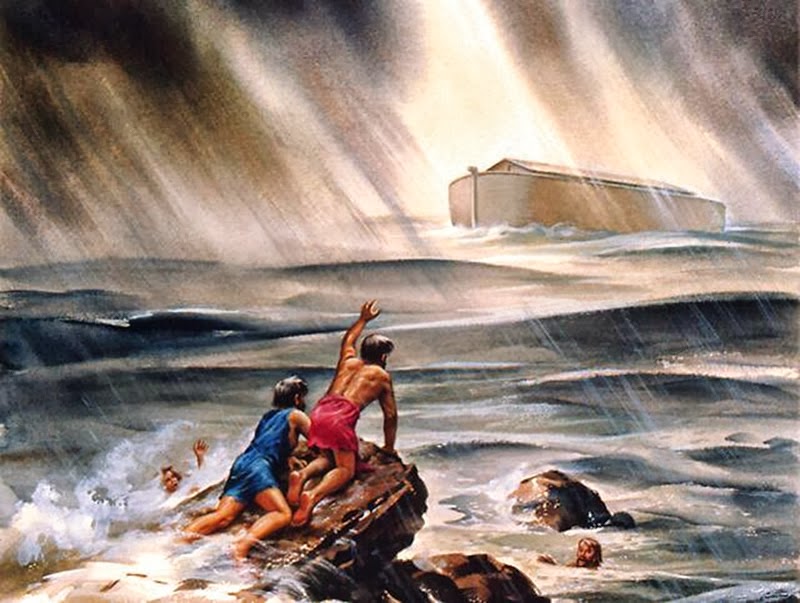 A brief study of Adrian Pablos & Fabian Massa. Excerpt from the book " From Eden to the Nations" will be released in early 2014.

In this chapter we appreciate the enormity of the catastrophe that meant the Flood and understand the consequences of it , from the standpoint of spiritual and intellectual . As we saw at the end of Chapter XII , once completed the ark and its cargo , while Noah and his family on board, The Lord Himself closed the door and started the flood , the water level rose rapidly and started flooding. The ark started floating and breaking the structure that held , was released beginning their journey in the middle of the storm , pushed by currents and winds .

According to the Bible as well as many ancient legends and traditions of civilizations scattered throughout the world (discussed in Chapter XV) , the Flood was a universal flood . The water level rose fifty feet above the highest mountains ( Bear in mind that the height of the mountains before the flood would be much lower than the current [1 ] ) . Gen. 7.12 - 12 says :

7:11 In the six hundredth year of Noah's life , in the second month , the seventeenth day of the month , on that day all the fountains of the great deep , and the windows of heaven were opened . 7:12 And the rain was upon the earth forty days and forty nights . The Torah (see image 14.1 )

In the biblical account, outer space is separated from the great sea of the Earth 's atmosphere by a solid barrier , which is why the Word says in Gen 1:7 " And God made the firmament and divided the waters which were under the firmament from the waters which were above the firmament. " When the Torah says: " ... the windows of heaven were opened and the rain was upon the earth 40 days and 40 nights " referred to in " The Barrier " there were openings where water fell Outer Sea ( Outer Space ) toward Earth.

b . The beginning of the Flood.

According to Genesis 7.6 to 16 in the six hundredth year of Noah 's Flood is unleashed .
Soon the water level of rivers and seas was rising, not only rain but also the sources of the Abyss were broken , ie ground water overflowed and the water began to bubble from the same soil . At one point , the water in the area where the Ark was built was enough to put in waterline , cut the ties and structure that held it was destroyed . Wind and water dragged by other dramatic trip . Men and animals that had fallen off the ship have desperately sought refuge in the highlands , but the water kept rising and soon there would be no escape for anyone or anything. A universal catastrophe .
From the tenth day in which the rain stopped , we imagine certain desperation and sense of confinement , and the beginning of family friction . From twentieth , assume that possibly there would be a tension and emotional instability in the family, plus great questions to Noah. Thirty day onwards , personal and family status of each member would be of extreme despair and conflicts of substantial severity . We assume that the whole family Noah reproach . We can also understand that Noah should exercise its authority and cry to God for an answer, and at this point would also be full of doubts . Meanwhile everyone should work hard. Had to care for animals , some gave more work than others .

c . An obvious question : Where did that much water?

The Word says that in addition to rain , water " Gushing " the sea. One can say that the abyss is a bottomless depth and , by extension, any deep place . The word is often used to refer to a pit , either the deepest ocean bottom or hell. Abyss comes from the Greek , ' bottomless ' , so that may come from the Sumerian Abzu ( Apsu in Akkadian ) , ' deep ' .

In 1977 a group of scientists discovered the first " hydrothermal vent " east of the Galapagos Islands. Hydrothermal vents are " geysers [4 ]" submarines. Emerge from the ocean , between 2,500 and 5,500 feet deep .
The phenomenon is that sea water is filtered by the boards of Tectonic plates [5 ] in the sea floor and comes into contact with the Earth Magma [6 ] , impregnated with various metals and chemicals typical of Magma . Then as a result of the high temperature rises much pressure , water is expelled back into the bosom of the ocean , along with sulfur and methane gases . This water flows at high temperatures.

The line of contact between tectonic plates are in constant motion [7 ] . These " hydrothermal vents " with openings in the ocean floor in contact with the magma land condicen well with the idea of ​​" Abyss " of rabbinical cosmography " Gehenna [8 ]" , located on the ocean floor and divided into three to seven parts superposed on each other .
In the Greek version of A. T. the word abyss represents both the original chaos (Gen. 1.2 ) as the tehom Hebrew, which is used in both apocalyptic and kabbalistic literature and the New Testament to refer to hell , the place of punishment :

2 Now the earth was formless and empty ,
darkness covered the abyss ( tehom )
and the Spirit of God was hovering
on the water surface [9].

In the Bible "abyss" is often used to this idea. Primarily in the Septuagint cosmography [10 ] the word " deep" applies to the waters under the earth which originally covered it, and that feeds springs and rivers , and the waters of the firmament which were regarded as closely related to below.

From the general idea of ​​depth , the term " tehom [11 ] " acquired the meaning ' place of the dead ' , but apparently never became the same as the She'ol [12 ] . In Revelation the She'ol is the spirit prison where occasionally wicked can escape and where Satan is doomed to spend 1000 years .

It is important to understand that " the sources of the Abyss " are the waters that are under the surface of Earth's oceanic crust and , of these "sources" gushed the water most of the " Flood, " when God told him to back off , again the same depths .

Now is one of the most important reserves of water fit for human consumption at our disposal , along with the Antarctic ice and glaciers [ 13 ] . We will develop these points later. The Flood , is seen in all traditions as a judgment of the dominant deity in every culture. Biblically is a decree of God against all humanity , because of their wickedness , Gen. 6.5 - 7:

6.5 And God saw that it was great man's wickedness on earth , and all the momentum of the thoughts of his heart was only evil all días.6.6 And it repented the LORD that he had made man on the earth , and grieved in his corazón.6.7 and the LORD said erase the man who believes , from the face of the earth , from man to the quadruped , creeping thing and the fowls of heaven, for I repent that I made them . Torah

However, as we saw in previous chapters timely , Gen. 6.8:

6.8 Noah found grace in the eyes of the Eternal. Tora .

From verse 6 that God's judgment was over all the earth and over every creature . So it qualifies as a mega flood universal catastrophe . In every culture Legends suggest that there was an organized society ( civilization ) .

[1 ] This point is elaborated in Chapter XVII " rearrangement orogenic "
Psalm 104:8 : " They climbed the mountains and down the valleys " in the Peshitta version in Spanish ( also known as Syriac Bible in Aramaic . ) Describes the process through which the Lord " rearranged " Earth to result Flood waters , so that the planet is populated with life again.

[2 ] Abyss, Sheol , Hebrew, strong7585 : Hades , place or world of the dead .
[3 ] The Galapagos Islands ( Galapagos islands also and officially archipelago of Columbus ) are an archipelago located in the Pacific Ocean 972 km off the coast of Ecuador . It is composed of 13 large volcanic islands , 6 smaller islands and 107 rocks and islets , distributed around the line of Ecuador land . Administratively , the islands are a province of Ecuador , whose capital is Puerto Baquerizo Moreno (officially , also called Insular Region of Ecuador ) . Wikipedia .

[4 ] A geyser ( the Icelandic = emanate ) is a special type of hot spring that erupts periodically.
[5 ] A plate tectonic or lithospheric plate is a piece of lithosphere that moves as a rigid block without internal deformation present coverage of terrestrial magma .
[6 ] Earth Magma : Molten rock is the inside of the planet .
[7 ] Plate tectonics is the theory that explains the structure and dynamics of the Earth's surface . Sets the lithosphere ( the upper portion and rigid colder Earth ) is fragmented into a series of plates that move on the earth's mantle . This theory also describes the movement of the plates , their addresses and interactions. The Earth's lithosphere is divided into large plates and lower plates or microplates . At the edges of the plates is concentrated seismic activity, volcanic and tectonic . This leads to the formation of large chains and basins .
[8 ] Gehenna : " Gehenna " is a transliteration and Ge drift Hinnom which means "Valley of Hinnom " and Gai Ben - Hinnom which means " valley of the son of Hinnom ." The valley was outside the southern wall of Old Jerusalem , is a royal valley located in Jerusalem (Joshua 15:8 and 18:16 , II Kings 23:10 , II Chronicles 28:3 and 33:6 , Nehemiah 11:30 , Jeremiah 7:31 ~ 32 , and 19:2 , 19:6 and 32:35 ) that after the year 638 . C. became the place used to incinerate waste Jerusalem.
[9 ] The exegete Rashi translates as the first verse of Genesis: "In the beginning , when God created the heavens and the earth, the earth was hollow and empty ... " as Holy Scripture here is not to show the order in which things were created , the proof of this is that the end of the second verse implies that water existed before the heavens and the earth , since there is no permanent sequential relationship in the text.

[10 ] Bible Septuagint is a translation of the Hebrew Bible into Greek . His writing began in the third century . C. by order of Ptolemy II of Alexandria and concluded at the end of 200 BC
[11 ] Hebrew: Tehom : depth , abyss. It is mentioned 36 times in the OT .
[12 ] Seol , Strong # 7585 Place of the Dead .
[ 13 ] Ice Antarctic Glaciers and freshwater reservoirs : Today in decline because of "Global Warming" .