NEWS. Mexico : Exorcists Vs Narcos , Part I. By Fabian Massa.

Week 70 shares with us : México, Narcos Exorcists Vs . 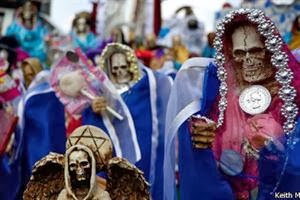 An unusual story , published on November 26, 2013 at the BBC , discusses the relationship between organized crime - drug trafficking and the cult of San La Muerte. This unfortunate association recognized by both the Catholic Church and the Government of Mexico .
For many priests , the country is under attack " Demon " , which responsible Wild deaths in the last decade ; BBC witnessed this phenomenon.


Exorcism is already a phenomenon in Mexico . Note , photo and videos: BBC News [1 ]

The Catholic Church points to the cult of Santa Muerte as the reason behind what he describes as the growing presence of the devil.
It is estimated that the Santa Muerte , a skull , a wedding dress or gown , has about eight million followers , making him all kinds of requests . For purposes of Mexican migration , researchers say that even already has a presence in Central America , United States and Canada.

And in recent years he had been a popular cult has been widely adopted by the killers of the drug cartels .

"Drug traffickers ask favors and help to avoid arrest , in return they offer human sacrifices. This has increased the violence in the country " .
The Catholic Church also believes that the legalization of abortion in 2007 in Mexico City contributed to evil spirits from spreading through the country. For Catholics priests two are closely related . There is an infestation of demons today in Mexico , because we have opened the door to death.

The BBC interviewed the priest Ernesto Caro , who observed : "When the troops began deploying in areas controlled by drug traffickers in 2006 , operating in many shrines and temples dedicated to organized crime were found Santa Muerte .

This link between cult members and drug cartels was later documented by the Attorney General's Office .
"When the government began to see this as a Church asked us to help in the campaign to defeat the criminal groups : us and them militarily Santa Muerte " .

The point of this story is this partnership between the Federal Government of Mexico and the Church , which shows that they understand that this evil must be fought both in the natural and the spiritual.

In Part II of this note, I will explain that although the diagnosis of the problem and arrived at the conclusion ( that the narco mafia must be fought both in the natural and the spiritual is very wise ) the result will be disastrous .

Evil and Death openly harass entire countries. Week 70 is about to begin . Are we ready ?