Study. The dispersion of the sons of Ham. By Fabian Massa 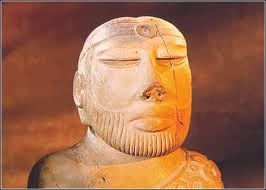 From the Age of Exploration, European scholars have been tempted to associate the lines of descent from Shem , Japheth and Ham with three " racial" groups : Asian ( Mongoloid [1 ] ) , African ( Negroid [2 ] ) and Indo- Europeans ( Caucasoids [3 ] )
This " simplified" approach can lead to generate lines of tortuous thinking : As the findings of the societies of the dominant countries during the era of slavery

Let's see how you get to a false and absurd conclusion, a logical and simplistic reasoning :

If " Cam " means black Africa and populated , then " ALL " Africans have black skin , therefore , "ALL" are descendants of Ham.
Noah prophesied that Ham's descendants would be servants of servants : " Servant of servants " to those companies involved slavery.
Conclusion : All Africans are black and descended from Ham, how it was cursed by Noah to be a slave, then enslave is " biblical and pleasing to the eyes of God."

This terrible handling of the Word , associated with excessive greed and hunger for power , took peoples "Christians" to enslave Africans , with a clear conscience , " Well, it was a divine command "
The only descendant of Ham to which it is related directly to the Negroid branch is Cush ( Kush : Black ) . Africans are descendants of Hamitic families, but Cam is not synonymous with " African " .


Cush and their descendants

Misraïm Heb . "Egypt " or " red land" . Second son of Ham (Genesis 10:6 , 13) and ancestor of the Egyptians. The Hebrew word probably refers to the two kingdoms of Egypt, the North and South .

Ludites : People connected with Egypt, migrated from North Africa to Asia Minor ( Turkey South Coast on the Mediterranean) and settled there ( Kingdom of Lud ) .

Anamites : People tied to Egypt, possibly located in the Oasis of Kemet ( Tierra Negra , name the Egyptians gave to their country ), south of Cairo.

Pathrusites : People tied to Egypt, I located in the Northern Kingdom ( Patros )

Casluhim : People tied to Egypt, possibly located in the west, on the coast of the Red Sea .

Caphtorites : People connected with Egypt, migrated and settled in the island of Crete ( most likely location ) . It is believed to be the Egyptian name Caphtor Crete.

Fut Heb . " arc of arrow " . Son of Ham (Genesis 10:6 , 1 Chronicles 1:8 ) and progenitor of a people closely related to Mizraim (Egypt) and Cush ( Ethiopia or Nubia) .
Egyptologists identify Fut ( Put * Jeremiah 46:9 ) with Punt, a country on the African coast of Somalia and Eritrea , where the Egyptians sent expeditions to obtain myrrh trees , leopard skins , ebony, ivory and other exotic products . There is uncertainty regarding the exact identification of Fut .

Canaan son of Ham (Genesis 9:18-27 ) and patriarch of the Canaanite tribes . Heb . " dealer ", " humble [ killed ] ." In horea kinahhu language the word means " red purple " and this would have been the original meaning of the term. When the Greeks came into contact with the Canaanites by the sea, they found that they called themselves ( "Purple Red ' gr. ) " Phoenicians " .

15 And Canaan begat Sidon his firstborn, and Heth ,
16 Jebusites , Amorites, Girgashites ,
17 the Hivites, the Arkites, the Sinites ,
18 to Arvadites, the Zemarites and Hamathites and afterward the families of the Canaanites spread abroad .
19 And the border of the Canaanites was from Sidon toward Gerar as far as Gaza , and then toward Sodom , Gomorrah, Admah and Zeboyim until Lhasa .
20 These are the sons of Ham, after their families, after their tongues, in their lands, after their nations.

Amorites Heb . " Highlanders " . Semi-nomadic people often mentioned in the early books of the Bible. The history of the Amorites is somewhat obscure , since no historical records were found in their own language , there are only references in Akkadian other neighboring towns.

Hivites Heb . " rural people [ inside ; villagers ] ."
Members of one of the tribes descended from Canaan ( Genesis 10:17). At the time of the Israelite conquest of Canaan , the Hivites that dwelt Gibeon (Joshua 9:1-7 ) could deceitfully a pact of friendship with the Hebrews. The Hivites also lived at the foot lace Lebanon mountains , especially near Mount Hermon (Joshua 11:3; agreement Judges 3:3 ) , and yet they were found in the region of Phoenicia in the time of David (2 Samuel 24: 7) . Solomon joined the rest of them to forced labor in its extensive building works ( 1 Kings 9:20-22 , 2 Chronicles 8:7 , 8) jobs.
Some scholars identify them with the Horites , as both names writing in postexilic Hebrew is virtually the same . If this is true the Bible is the most complete information .

Gen 14
6 And the Horites in their mount Seir, unto El-paran , which is by the wilderness .
Dt 2
12 And in Seir before the Horites , who drove to the children of Esau, and drove them out from his presence, and dwelt in their stead , as Israel did in the land which the Lord gave them possession ) .

People Sinites Phoenician Canaanite (Genesis 10:17 , 1 Chronicles 1:15) who lived in the city or around Siannu .

Ploughs = Arwad = Ruad . Arvadites Heb . " belonging to Arvad " . Inhabitants of Arvad (Genesis 10:18; 1 Chronicles 1:16). Heb . Shelter for the "wandering" ( nomad ) . Port city in northern Phoenicia, on the island Ruad ( plows on the map ) , about 3 km from the coast and about 48 km north of Tyre . Arvad ( classical and modern Ruad Aradus or Arwad ) , is the only Mediterranean island of Syria. Also called Ruad Island .

Zemarites Members of a tribe descended from the Canaanites ( Genesis 10:18 , 1 Chronicles 1:16). Zemarites were possibly the inhabitants of a city on the coast of Phoenicia. ( Kick ? )
Ez . 27:8 : " The inhabitants of Sidon and Arvad were your rowers ; experts Zemer men were in you." The Masoretic text , however , says " kick " , the most famous city in the region .

The Indus River valley was populated by possibly Hamitic tribes around the c [4 ] . 3300 BC, giving birth to the " Indus Culture [5 ]"

The Indus Valley culture was developed from c . 3300 B.C. to c . 1300 B.C. It covered about a hundred settlements and two major cities : Harappa and Mohenjo - Daro . Together comprised an area of ​​over one million square miles, and went through several periods , reaching its peak between 2600 BC and c . 1900 B.C.
Like the Sumerian and Egyptian civilizations, the culture depended on the river. The Indo annually overflowed , flooding large areas and depositing fertile silt. This immense agricultural potential was the basis on which the planning was developed around its banks . Culture is considered pre-Aryan Indus [6 ] .
This civilization began as a largely agrarian community, made ​​up of small villages , where people lived in mud huts . The main crops were wheat , barley, rice, vegetables , dates and melons . Circa 2400 BCE had developed a complex urban civilization , comparable to that of Sumer and Ancient Egypt. The growth process was the same for all the pre cultures and postdiluvian :

1. A development of agriculture and livestock , resulting in sedentary populations .

Two . The onset of spinning industries such as wool and cotton ( the culture of Mohenjo - Daro is the oldest work in cotton yarn ) . They also had an advanced metallurgy and fine jewelry. The pottery had achieved high development.

Three . All this favored the emergence of trade. Again the uneven distribution of wealth generated difference between social classes .
By 3000 B.C. commercial and cultural exchange seaway with Sumer and Arabia and Persia overland traffic through the mountain passes Northwest began .
Along with trade , came a writing system with characters and signs inscribed on clay stamps or smooth stones , which have not yet been clarified or decrypted by specialists.
Some of these characters share a strong resemblance to those found on Easter Island [7 ] .
No vestiges of religion from the first culture, although it is known that worshiped goddesses mothers with rituals designed to promote fertility . Around 1500 B.C. were invaded by large waves of Indo-European peoples , who imposed their religion, the Vedas , language - Sanskrit - and the caste system .

[1 ] Mongoloid , Dictionary of the Spanish Language © 2005 Espasa -Calpe : adj . com and . Type or physical features of Mongolian ethnic groups , ie , yellowish skin, slanted eyes and straight dark hair .
[2 ] Negroid , Dictionary of the Spanish Language © 2005 Espasa -Calpe : adj . Having any of the characters of the black race or your culture .
[3 ] Caucasoid : Off white or Indo-European race or relating to it , because it is supposed to be originally from the Caucasus.
[4 ] c . = Circa, Latin, means roughly , or around .
[5] http://es.wikipedia.org/wiki/Cultura_del_valle_del_Indo
[6 ] That is, prior to the Aryan invasions ( Indo-European ) who submitted the Indian subcontinent about 1500 c . BC , pushing the first settlers (presumably Hamitic people pretty brown skin )
[7 ] Easter Island: is a Chilean island located in Polynesia in the Pacific Ocean.