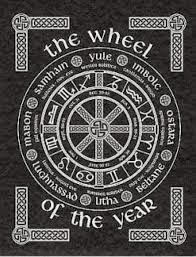 Symbols of Yule : Pay attention to the swastika in the center of the Unconquered Sun and the zodiac wheel .

Week 70 shares with us : The Celtic Solstice celebrations

As we saw in the post " Solstice Pagan Holidays [1 ] " a word solstice comes from the Latin Solstitium " quiet Sun " are the times of year when the sun reaches its height more or less apparent in the sky , and the duration that are maximum or night of the year, respectively [ 1] .

The solstices occur in inverted on terrestrial hemispheres :


In Celtic culture, the winter solstice celebration was called Yule . The Yule means the time at the wheel of the year is at its lowest point, ready to rise again.

In Scandinavia there was a tradition to celebrate Yule with dances and parties. Also sacrificed a pig in honor of Frey , the god of love and fertility , according to the belief that controlled the weather and rain . During the festival of Yule was the traditional burning Yule log , a large tree trunk that was smoldering throughout the season of celebrations in honor of the birth of the new sun. From this tradition comes the Yule log cakes ( chocolate logs ) that today are eaten at Christmas .

The ancient Celts believed that the tree represented a power, and that power and helped protect the tree. Sacred groves served as a temple to the Germans.
For the Gauls, the oak was a sacred tree on the Druids , Celtic priests guardians of traditions, mistletoe collected following a sacred rite .
This tradition , inherited through centuries, was the inspiration for the current Christmas tree [3 ] . 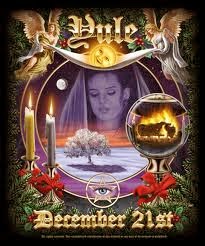 Currently in the neo-pagan [5 ] culture, this celebration has been rebuilt in many different groups, as in the case of Wicca and Asatru Religion Religion: a way to celebrate the holidays is through " eight solar holidays ," called commonly " Sabbats annual conference " .3 Yule festivities are held at the winter solstice : in the northern hemisphere , around December 21 , and in the southern hemisphere , around June 21.
Yule and Yuletide , like the "Festival of yalda " ( an Iranian winter holidays) , are archaic Indo terms used to refer to the old tradition observed natural changes caused by the rotation of the sun around the earth and its effects on food crop during the winter solstice or the winter solstice. In celebration of Yuletide , as it is customary to sing songs in order to provide a relaxed atmosphere. In fact this concept is the meaning of Yule by two different dictionaries from Oxford : Oxford Inglés Dictionary and Concise Oxford Dictionary .
People who are not familiar with Norse mythology and European paganism simply would not know to distinguish between words Yule ( Joul ) , Christmas and the Nativity, which in a sense are synonymous and the same vezantónimos . This use or term still survives in many Christmas carols and songs, as well as making a cake or cake called Yule log or Yule log , in direct reference to a trunk of this ancient ritual feast .
The word Yule still exists in some Scottish dialect , the term July in Norway , Denmark and Sweden , and in Finland the term joulu . It is now generally considered the festive period from Christmas Eve until after the first of the year or, especially in England, to the Epiphany.

It is important to understand that Christmas is a pagan holiday , which is " Christianized " by the Roman Church (after the fourth century ) . [6] Now, after so many centuries of " Christian Tradition " is virtually impossible to banish these customs . But at least we can celebrate Christ and not fall into the mad race of consumerism itself " Roman Saturnalia . "

Week 70 is about to begin, Church: It's time to leave paganism.