Study. The Dispersion of Japheth Rhodes and Cyprus. By Fabian Massa. 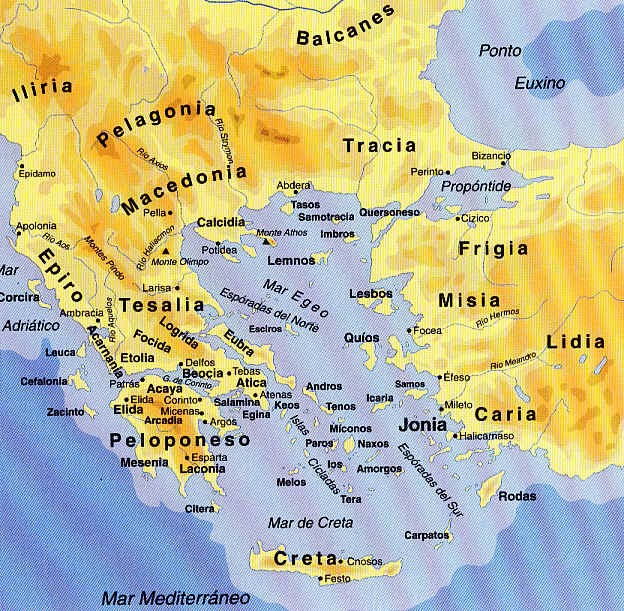 When we were asked Adrian Pablos and my book on Biblical prehistory gladly accept homework and got to work hard . Our goal from the beginning was performing work that enthuse people to read and study the Bible. Here I approach them an excerpt from Chapter XXI of the book " From Eden to the Nations."

Rodanim , fourth son of Javan , of uncertain significance . Possibly refers to the Greek island of Rhodes ( Rhodian ) . Rhodes extends NE - SW south of the Turkish coast , of which only 15 km apart and 490 km. Athens . It is the largest of the Dodecanese archipelago island. Its capital city has the same name and housed the entrance to the port "Colossus of Rhodes " , which was one of the Seven Wonders of the Ancient World.

Ancient inhabitants of Rhodes
Rodanim or Dodamín Fourth son of Javan , and his descendants (Genesis 10:4 ) , of uncertain significance . Possibly refers to the proto - Greek island of Rhodes ( Rhodian ) . According to Greek mythology, the original inhabitants of Rhodes were the Telchines [1 ] Legendary ( originally from Crete) : The Telchines were nine and a sister, Halia , sexually associated with Poseidon (god of the seas ) and from this union they had six sons and a daughter named Rhodos , from which the island takes its name. It is also likely that the name "Rhodes" derives from the Greek rhodos (pink ) and the rose as a symbol appears on the coins.

While Greek Mythology was gathered around the seventh century by Homer and Hesiod [2 ] these stories were originally broadcast on an ancient oral poetic tradition shaped by stories, legends and genealogies (possibly arising after the dispersion after the confusion of Babel ) That is the same case of the collection of the Book of Genesis, before being written by Moses ( 1400-1440 CAC ) existed as a story that was passed down from generation to generation by oral tradition , since the dawn of time until the time of collection .

For us as Christians, all these mythological stories are " rare " (to qualify in some way) , but it is important to know and understand them spiritually different elements relate to each other mythologies . The myth of the origin of Telchines ( demons as the Anunnaki [3] and as harmful as Grigori Genesis 6) We see sexual union of gods with women born called " Heroes" in Greek culture, same manner as in the biblical story unions the sons of God and daughters of men led to the Nephilim , the powerful of their time . Both the "heroes" biblical Greek as powerful , were all men of renown ( fame) who survived until today.

Prehistory
Very little is known about the appearance of the ancient Cretan civilization because very few written records have survived until today. This contrasts with the richness of palaces , paintings and sculptures that remote age . There is not much to talk about religion in the prehistoric period . We know they had a cult of Mother Earth goddess (for figurines features of this type of deity ) and worshiped the dead , who were buried under the floor of their huts. The Minoan period is after 3000 BC and therefore beyond the scope of this paper.

The data found are consistent with those we have seen previously studied for cultures. The chronology of prehistoric Crete has been based on the comparison of its ceramics and pottery Aegean pottery and Middle East and Egypt. From measurements made with organic residues C14 , it is believed that Crete was inhabited from 7000 BC This finding is consistent with the flowering of other cultures view until now ( Cananea and Egyptian ) .

Crete has discovered the existence of an extinct fauna , very old ( over 12,000 years BC) such as hippos , elephants , horses and deer (all dwarves ) and large insectivorous rodents. Science could not explain what might have caused the mass extinction , but for us it was obvious that the Flood . An interesting proof of this is that animals that are now on the island were introduced by men who came possibly East : Anatolia, Cilicia and Canaan. These waves of human migration have introduced domestic animals such as sheep , goats , pigs and dogs , ie animals that we have studied in earlier chapters of this book and determined science (based on the evidence found ) that originate in Middle East. Likewise also introduced the cultivation of cereals and vegetables.

The chronology of the ancient history of Crete was established from the excavations of Arthur Evans [5 ] , who tried to rebuild establishing correspondences with the story of Troy, the Cyclades, Greece , Egypt, and Mesopotamia and from Cretan objects found in those regions.
There are two theories about the origin of the first settlers of the island, both based on the metallurgy found :

1. Arthur Evans 's thesis , which states that the introduction of metals in Crete was due to immigrants from Egypt. The information provided by the Bible dictionaries agrees with this argument, as we shall see when we study the descendants of Ham in Chapter XXI. According to Christian scholars , Caphtorites , people linked to Egypt , migrated and settled in the island of Crete ( most likely location ) . It is believed to be the Egyptian name Caphtor Crete.

Two . The current leading theory is supported by the entire Aegean region was inhabited by a designated pre-Hellenic or Aegean people . Scholars who support this thesis argues that Egypt seems too distant to exert an important influence at this time , while the Anatolian peninsula is much closer and seems to have greatly influenced the initiation of Crete in the arts of metals. The widespread use of bronze in the Aegean Sea is related to large population movements from the coast of Asia Minor to Crete , the Cyclades and southern Greece ; these regions entered a rapid phase of social and cultural development, mainly marked by booming trade between Asia Minor and Cyprus.
Importantly could have given the two situations.

[1 ] Telchines (Gr. Slanderer ) the mythological beings were nine siblings, half marine , terrestrial ball, with a dog's head , the lower body as fishtail or snake and fingers webbed hands ( Seals ) . Sons of the gods of Pontus and Thalassa were the first inhabitants of the island of Rhodes , who then Telquinis was named in his honor. Were sorcerers , demons envious . Were said to have destructive powers and the elements ( hail , rain and snow ) Taken from Wikipedia .
[2 ] Herodotus was a Greek historian and geographer who lived between 484 and 425th . C.
[3 ] Mit . Babylonian , Anunnaki , ( children of Anu and Ki gods).
[4 ] Information extracted from http://es.wikipedia.org/wiki/Historia_de_Creta
[5 ] Sir Arthur John Evans (USA July 8, 1851 - 11 Jul. 1941 ) , British archaeologist who discovered the Palace of Knossos and the Minoan civilization in Crete , which was one of the most important findings major in History.