Study. The descendants of Ham in Canaan. By Fabian Massa

Excerpt from a study conducted by Adrian Pablos & Fabian Massa, part of the book " Nations Eden "

The Bible gives the following information on the descendants of Ham in Genesis 10 [1 ] :

6 The sons of Ham were Cush , Mizraim, Put and Canaan.
7 The sons of Cush were Seba , Havilah , Sabtah , Ragama and Sabteca .
The sons were Sheba and Dedan Ragama .

Then in verse 8 to 12 makes a break where it mentions Nimrod and the expansion of his empire ( this point is elaborated in Chapter XIX) , then continue with the genealogy in verse 13:

13 Mizraim was the father of the Ludites , Anamites , Lehabites , Naphtuhites 14 Pathrusites , Casluhim and Caphtorites , from whom descend the Philistines.
15 Canaan was the father of Sidon his firstborn, and Heth , 16 and the ancestor of the Jebusites , Amorites , Girgashites , 17 Hivites , Arkites, Sinites 18 Arvadites, Zemarites and Hamathites .

In the following verses God's Word tells us which were their territories :

Then, these Canaanite clans scattered 19 and its territory extended from Sidon to Gerar and Gaza, and then toward Sodom , Gomorrah, Admah and Zeboiim , to Lasha .

Let us study these points a little cot territory boundaries , which limited the west by the Mediterranean Sea:

Sidon: Phoenician city that was an important port , was founded around the third millennium BC It is located about 37 km north of the city of Tyre . Marked the northern boundary of Canaan (Gen. 10:19).

East limit :
The natural limit of this area is the Jordan River .

Gaza : The most important of 5 Philistine cities of Palestine. It was an ancient Canaanite city (Gen. 10:19) is mentioned for the 1st time in the cuneiform texts of Ebla prepatriarchal period. He later appears in the Amarna Letters . Today it is the largest city in the Gaza Strip . Was originally a Canaanite settlement and was later one of the cities - states of the Philistines ( who invaded the shores from Crete - Caphtor Gen. 10.14) .

Gerar : Ancient city on the southwestern border of Canaan , near Gaza (Gen. 10:19; 2 Cr 14:13). It was inhabited by the Philistines in the patriarchal period ( II millennium BC ) , where Abraham and Isaac had dealings with the king (Gen. 20:1, 2; 26:1 , 6) . It has identified its possible location approximately 14.5 km south of Gaza , known as Tell ej- Jemmeh , excavated between 1926 and 1927. Many grain stores of the Persian period were discovered , showing that the city had served as storage . Other scholars have identified with Tell esh- Sherah , about 25.5 miles east -southeast of Gaza , but the evidence seems to point to Tell Hureirah Aba , about 17.5 km southeast of it as the most likely site of ancient Gerar [2 ] .

Sodom and Gomorrah were two cities very close to each other, to the Ziddim Valley , south of the Dead Sea.

Lasa is not known where he could be located , although scholars believe was near the previous four cities Ziddim Valley .

We have approximately the territory now occupied Israel , Palestine and Lebanon. 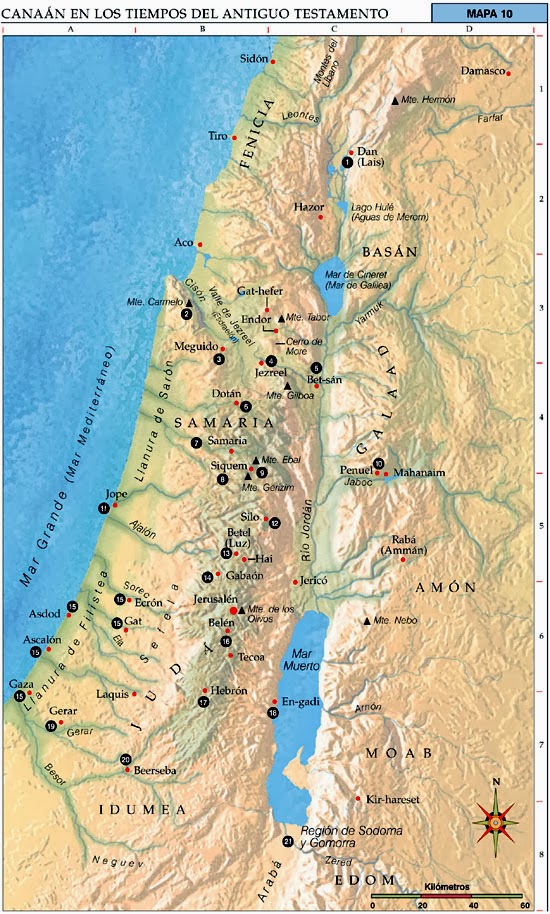 Let's see what were the people who were settled in this territory :

Canaan son of Ham (Genesis 9:18-27 ) and patriarch of the Canaanite tribes . Heb . " dealer ", " humble [ killed ] ." In horea kinahhu language the word means " red purple " and this would have been the original meaning of the term. When the Greeks came into contact with the Canaanites by the sea, they found that they called themselves ( "Purple Red ' gr. ) " Phoenicians " .

15 And Canaan begat Sidon his firstborn, and Heth ,
16 Jebusites , Amorites, Girgashites ,
17 the Hivites, the Arkites, the Sinites ,
18 to Arvadites, the Zemarites and Hamathites and afterward the families of the Canaanites spread abroad .
19 And the border of the Canaanites was from Sidon toward Gerar as far as Gaza , and then toward Sodom , Gomorrah, Admah and Zeboyim until Lhasa .
20 These are the sons of Ham, after their families, after their tongues, in their lands, after their nations. Gen. 10

Amorites Heb . " Highlanders " . Semi-nomadic people often mentioned in the early books of the Bible. The history of the Amorites is somewhat obscure , since no historical records were found in their own language , there are only references in Akkadian other neighboring towns.

Hivites Heb . " rural people [ inside ; villagers ] ."
Members of one of the tribes descended from Canaan ( Genesis 10:17). At the time of the Israelite conquest of Canaan , the Hivites that dwelt Gibeon (Joshua 9:1-7 ) could deceitfully a pact of friendship with the Hebrews. The Hivites also lived at the foot lace Lebanon mountains , especially near Mount Hermon (Joshua 11:3; agreement Judges 3:3 ) , and yet they were found in the region of Phoenicia in the time of David (2 Samuel 24: 7) . Solomon joined the rest of them to forced labor in its extensive building works ( 1 Kings 9:20-22 , 2 Chronicles 8:7 , 8) jobs.
Some scholars identify them with the Horites , as both names writing in postexilic Hebrew is virtually the same . If this is true the Bible is the most complete information .

6 And the Horites in their mount Seir, unto El-paran , which is by the wilderness .
Dt 2
12 And in Seir before the Horites , who drove to the children of Esau . Them and threw their presence , and dwelt in their stead , as Israel did in the land which the Lord gave them possession ) Gene 14

Pueblo Sinites Phoenician Canaanite (Genesis 10:17 , 1 Chronicles 1:15) who lived in the city or around Siannu .

Ploughs = Arwad = Ruad . Arvadites Heb . " belonging to Arvad " . Inhabitants of Arvad (Genesis 10:18; 1 Chronicles 1:16). Heb . Shelter for the "wandering" ( nomad ) . Port city in northern Phoenicia, on the island Ruad ( plows on the map ) , about 3 km from the coast and about 48 km north of Tyre . Arvad ( classical and modern Ruad Aradus or Arwad ) , is the only Mediterranean island of Syria. Also called Ruad Island .

Zemarites Members of a tribe descended from the Canaanites ( Genesis 10:18 , 1 Chronicles 1:16). Zemarites were possibly the inhabitants of a city on the coast of Phoenicia. ( Kick ? )

Later, the tribes were expanded and were moving south , reaching Egypt where they founded one of the most attractive human civilizations , a history that remains for the next installment .