Study (Sh). The Last Battle of Jerusalem , according to the Bible , by Fabian Massa. 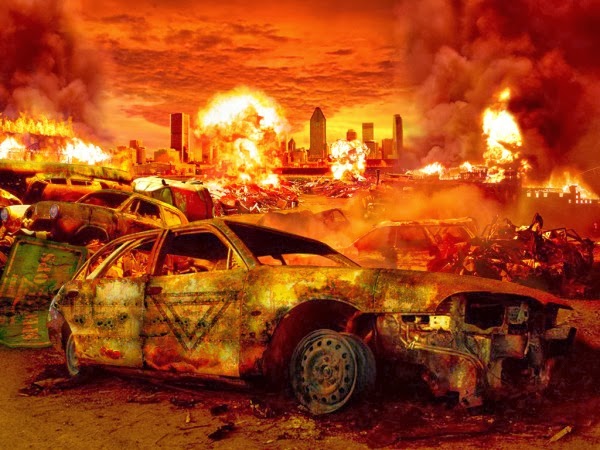 Week 70 shares with us : The Last Battle of Jerusalem, according to the Bible .

12 And the sixth angel poured out his bowl on the great river Euphrates , and its water was dried up to make way for the kings from the east .
Rev. 16.12

They have already been several stories in the newspapers about the fragility of the Euphrates [1 ] river. This watercourse is being savagely exploited by countries through Turkey , Syria and Iraq finally . All these systems have dams to generate electricity and have water reservoirs for drinking and irrigation .
Only the Turkish giant Atatürk Dam has the capacity to hold all the water of the Euphrates [2 ] .

As we saw in the post " The Russian Invasion - Islamic Israel " [3 ] Russia ( Gog ) allies to lead a war of mass destruction against Israel. The troops would advance by the dry bed of the Euphrates . The enemy Army ( powerful ) set its base at Mount Megiddo ( Argamgedón ) and advance southward toward Jerusalem .

4 "In that day shall the Lord your feet on the Mount of Olives, which is east of Jerusalem, and the Mount of Olives shall be split in two from east to west, and form a great valley , with half of mountain moving north and half south . 5 You will flee by my mountain valley , for it will extend to Asal . You will flee as you fled from the earthquake in the days of Uzziah king of Judah . Then shall the Lord my God, with all his faithful. Zac . 14.4 NIV -5 .
1 »Jerusalem ! There comes a day when the Lord thy spoil shall be divided in your own streets. 2 gather all nations to fight against you . You will conquer , they prey of your houses and violate your women . Half of the city will go into exile, but the rest of the people will stay with you . 3 Then the Lord will go out and fight against those nations , as He fights in the day of battle . Zac . 14.1 -3 NIV

But the Lord will give the final victory to Israel :

12 » This is the plague with which the Lord will strike all the nations that fought against Jerusalem : They rot the flesh in life, les eyes rot in their sockets, and their tongue will rot in their mouths. ( This is the same effect of using tactical nuclear weapons ) 13 In that day the Lord will fill them with panic. Everyone raise their hand against the other, and attack each other. 14 Judah also will fight at Jerusalem, and the wealth of all the surrounding nations will be collected , and large quantities of gold and silver and ropa.15 A similar plague will strike also horses and mules , camels and donkeys , and to everything that is in those camps. Zac.14.12 , NIV .

A series of global cataclysms :

17 The seventh angel poured out his bowl into the air , and from the throne of the temple came a loud voice saying, "No more ! " 18 And there were flashes of lightning , rumblings , peals of thunder and a violent earthquake. Never, since the gender * human exist on earth , he had been a large and violent earthquake. 19 The great city split into three parts , and the cities of the nations collapsed. God remembered Babylon the Great and gave him to drink from the cup filled with the wine of the wrath of her punishment. 20 And every island fled away and the mountains . 21 From heaven fell unto the people huge hailstones nearly forty kilos each. [ A] And they cursed God for the terrible plague. Rev. 16.17-21

Jesus also announced a large earthquake and tsunami in the Signs of the end as it collects what Lucas :

20 " But when you see Jerusalem surrounded by armies, then know that its desolation is near. Lc . 21.20 NVI.25 " There will be signs in the sun, moon and stars. On the earth, nations will be in anguish and perplexity at the roaring and tossing of the sea. Lc . 21.25 NIV

Many of the prophesied signs are ready , what is missing is :

Are you still only preaching to your congregation that God wants them to prosper ?

It is time we also begin to talk about the Endtime

Week 70 is about to begin . We have the Bible, which we do not preach these things is no excuse for not knowing . Christ is coming soon , are we ready ?

in Iraq
· Haditha Dam , completed in 1987 , with a large reservoir of 500 km ² ;
· Dam Ramadi , which allows embalming flood in depressions and Abu Didis Habbanya ;
· The Euphrates Thartar - channel, which allows to derive flood in the Tigris Euphrates Thartar across the lake , with an area of 2,710 km ² ;
· Third River , completed in 1992 , was built to drain the southern marshes , which allowed control of the Shiite region and irrigation of new lands. After the war in Iraq in 2003 , the Shiites have partially destroyed the levees and restored wetlands by 40 % (GEO No. 322 December 2005 P128 ) .
· Dam Hindiya