Study ( Sh ) . GuideStones Georgia [1 ] , Armageddon and the Rider of the White Horse . By Fabian Massa. 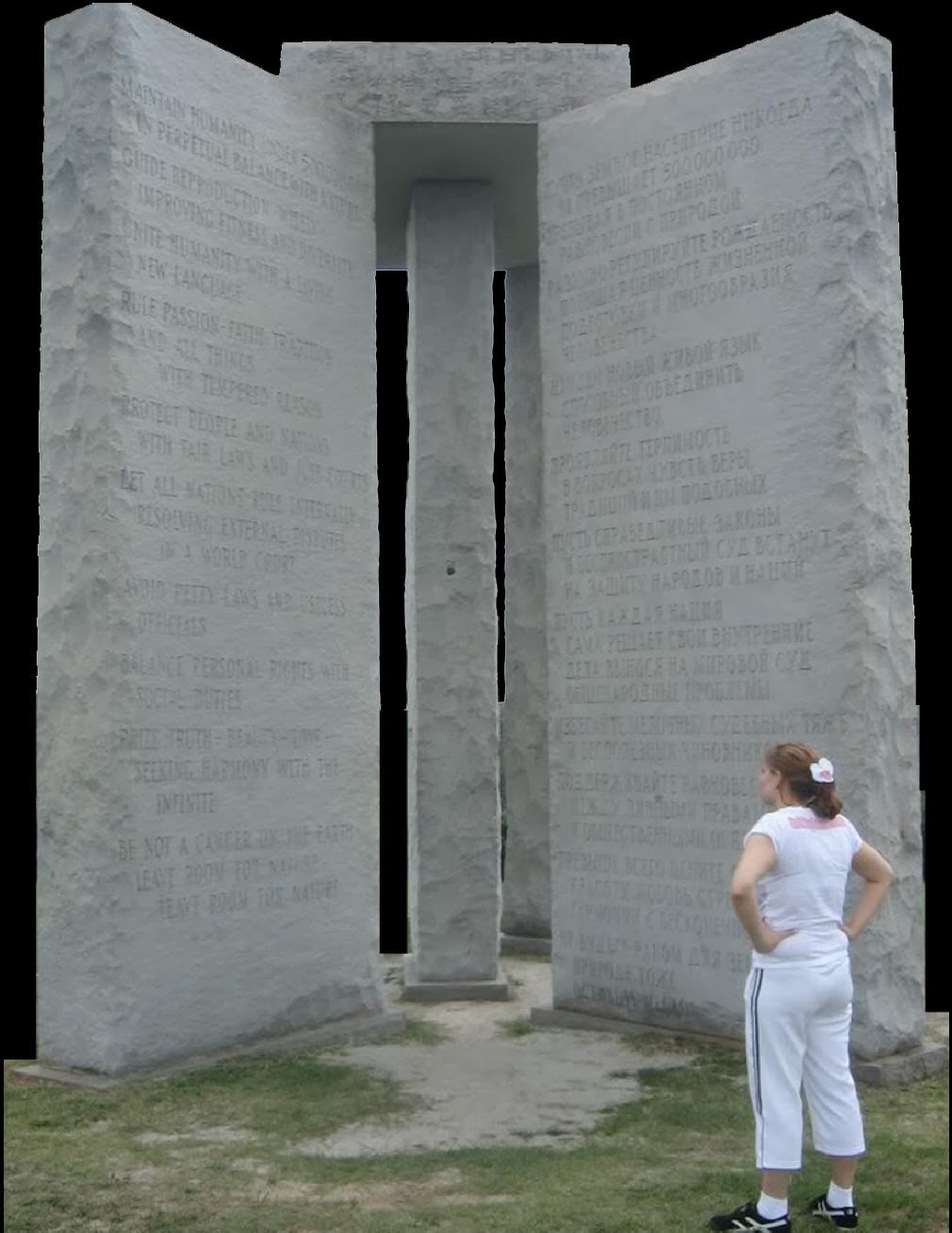 Week 70 shares with us : Georgia GuideStone , Armageddon and the Rider of the White Horse .

Elbert County , Georgia (USA ) are huge granite sculptures , known as American Stonehenge. They were commanded to build and enigmatic place for a gentleman with the pseudonym RC Christian , which is not never heard anything more . It is said that the cash paid leave also buying the land they occupy , to leave later.
The sculpture is composed of six granite slabs weighing a total of 100 cubic tons . They were aligned with astronomical criterion.


The purpose of the memorial was to leave a message to humanity. The stones have a short message at the top in four ancient languages ​​: Babylonian, Classical Greek, Sanskrit and ancient Egyptian. And a long message in eight modern languages ​​: English, Spanish , Swahili, Hindi, Hebrew, Arabic , ancient Chinese and Russian.

The message in English translated into Spanish is:

MAINTAIN HUMANITY UNDER 500,000,000
IN PERPETUAL BALANCE WITH NATURE
GUIDE REPRODUCTION WISELY A
IMPROVING FITNESS AND
DIVERSITY

PROTECTING PEOPLE AND THE NATIONS
CLEAN WITH LAWS AND
JUST CUTS

ASSESS THE TRUTH - BEAUTY
LOVE - SEEKING HARMONY
WITH THE INFINITE

The Spanish translation shown above, corresponds closely to the original in English, this is to authenticate the original message. In the vertical surfaces of the upper horizontal stone, a shorter message appears in Babylonian cuneiform (north), Classical Greek (east), Sanskrit (south) and in Egyptian hieroglyphics (West): That these are the principles of Age Reason [2 ] , ie neglecting any explanation that is based on the Bible to replace scientific reasoning .

The Stone Guide : About 4 meters from the main monument is a stone slab that describes the structure of GuideStone . - The " Georgia Guidestones erected on March 22, 1980 " It detailed the following information . - The languages ​​that are on the sides of the projecting stones. Below this, there is a drawing of the monument seen from above, with markers of certain brands . To the left of it , the text continues : - " The monument is located on the highest point in Elbert County ." - "In equinox or solstice, visitors who are west of the slot will see the sunrise on the horizon." - "They can see Polaris through the slot in the center stone ."

Here are some lines of the message in particular:

MAINTAIN HUMANITY UNDER 500,000,000
IN PERPETUAL BALANCE WITH NATURE
How to get almost 7,000 million people ( the current World population) to poor 7.2 % ? Obviously with widespread conflict and the use of thermonuclear weapons World War III [3 ] . Revelation prophesies also a dramatic reduction in the world population will be decimated repeatedly for different events ( earthquakes , tsunamis , meteors , plagues , wars, famines ) . Obviously with such a small population is much easier to maintain order , ie to control everything is in harmony . The schemers of this New World Order (NWO ) plan to take control and domination of the planet and humanity.

GUIDE REPRODUCTION WISELY A
IMPROVING FITNESS AND
DIVERSITY
NOW also control the playback will be selective. A caste system that is functional to the regime will prevail.

The NWO will have one language and one religion ( Just like the Babel of Nimrod before the confusion of tongues , Gen. 10), the supreme humanism ( 666 [4 ] ) . Following the message refers to a world government , which is basically the Antichrist .
These are the plans of Satan, overcome Christ and His saints , to wipe out God from the minds of humanity so we can rule the world quietly . The good news is that after the Mother of all Battles ARMAGEDDON [5 ], The Winner is the King of Kings and Lord of Lords :

11 And I saw heaven opened , and behold a white horse . Its rider is called Faithful and True . With justice he judges and makes war . 12 His eyes are like blazing fire, and his head are many crowns . Has a name written which no one knows except Himself . 13 He is dressed in a robe dipped in blood, and his name is "the Word of God * ." 14 What are the armies of heaven , riding on white horses and dressed in fine linen , white and clean . 15 Out of his mouth comes a sharp sword with which to strike down the nations . " He will rule them with an iron fist . " [ A] He treads the wine press of the fierce wrath of God Almighty . 16 On his robe and on his thigh a name written :

King of kings and Lord of lords.

17 And I saw an angel standing on the sun, shouted to all the birds flying in midair , "Come , gather for the great supper of God , 18 to eat the flesh of kings , military chiefs and magnates ; flesh of horses and their riders, . flesh of all people , free and slave , small and great "

19 And I saw the beast and the kings of the earth and their armies gathered together to make war against the rider on the horse and against his army . 20 But the beast was captured along with the false prophet. This is the one doing miracles before him , with which he deceived them that had received the mark of the beast and worshiped his image. The two were thrown alive into the lake of fire and brimstone . 21 The rest were killed with the sword which proceeded from the mouth of the rider on horseback, and all the birds gorged themselves on their flesh . Revelation 19.11 - 21 NIV .

The Lord has already said everything, so that when it does know that He is truly God. Week 70 is about to begin : Are we ready ?