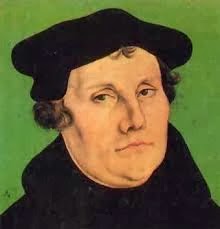 Week 70 shares with us: Luther's Reformation .

The Reformation was a movement that began in Germany in the sixteenth century , at the hands of Martin Luther. By the year 1500 , the Church of Rome was "The Spiritual Government " over Europe .

In the fifteenth century the church was in deep corruption in all spheres : Political , economic, social and ecclesiastical . In 1517 it was Pope Leo X who was remodeling the old St. Peter's Basilica in the Vatican. The play ended up suing a lot of money and to finance the Pope allowed the Prince Albert of Brandenburg [2 ] and his agent John Tetzel sale in Germany of some very special licenses called " Indulgences " [3 ]


Indulgences were certificates issued by the Clergy , which exempted them from guilt or sin to the receiving avoided his soul passes through the " Purgatorio ." To deliver from sin Indulgences were a " key entry to Heaven " that could be bought for themselves or even people could buy the favor of their deceased relatives .

At that time , an Augustinian Catholic German monk named Martin Luther [4 ] rose against such corruption . For Luther , the sale of indulgences was a scam and a hoax believers about the salvation of their souls. In 1517 , Luther nailed to the church door in Wittenberg his 95 theses , which attacked the sale of indulgences and outlined what would be his doctrine of salvation by faith alone . This document is known as " The 95 theses in Wittenberg " and was considered the beginning of the Protestant Reformation.

Luther's Reformation was motivated by zeal for God's Word and was supported by scholars, politicians and businessmen of his time for a very different motivation: They wanted the independence of sovereign states dominion of Rome . This was the real reason for them to support reform , thus serving as mandated by the Lord to His Word back to get in the maximum place of authority , as in the Roman Church had put under the tradition of the Fathers of the Church and the interests of the papacy and the clergy.

Martin Luther revised the medieval doctrines of the Church of Rome contraponiéndolas with what the Bible says . In particular , rejected the sacramental system of the complex medieval Catholic Church, which practices allowed and justified as the " sale of indulgences " as Luther, a real kidnapping of the Gospel, which was to be preached freely , not sold.

At first , the Catholic Church did not give too much importance to the ideas of Luther, or its attacks on the doctrine of salvation by works, but soon had to react to the news from Germany , that most of the people I was challenging the dominance of papal Rome .
The claim of Luther was not the schism of the Church but that these deviations are corrected . As Rome did not want to give space and political power - economic not accept Luther's ideas , which he considers a heretic until today .

One of the greatest works of Luther was the translation of the Scriptures into German . The goal of putting the Word of God as the first spiritual authority in the life of Christians demanded that everyone had access to a Bible in their native language.

A recognized Protestant author, Philip Schaff ( in "The New Schaff -Herzog Encyclopedia of Religious Knowledge ," Reformation art . ) Summarizes the principles of Protestantism in the following words :
The Protestant goes directly to the Word of God for instruction and the throne of grace in their devotions , while consulting a Roman Catholic teachings of his church and prefers to offer their prayers through the Virgin Mary and the saints . This general principle of evangelical freedom , and a direct relationship of the believer with Christ , come the three major doctrines of Protestantism : 1 ) The absolute supremacy of the Word , 2 ) the grace of Christ and 3) the universal priesthood of believers ... [5]

For today we have the ability to:

a. Buy a Bible in our own language.

b . Direct access to God's grace upon us, it is by the sacrifice of Jesus Christ way .

c . Fulfill the mandate of Jesus to freely exercise their priesthood ( Revelation 1.6 " He who has made ​​us a kingdom, priests to his God and Father " ) .
Many people were persecuted, tortured , forced to leave family , property, fleeing into exile , and many ended up murdered.

reflection:
But today , has spread a movement within the Protestant churches that are wanting to go back to the old system , taking away the authority of the Word to give to the traditions or the cult of personality of the pastor. While Catholics wield Papal Infallibility , many today do the same with Infallibility Pastoral , with the result of that we have a Quasi - Pope in every Evangelical Church , putting in over estimated what the Minister said that in Scripture (which rarely opened ) .

Whole congregations who only read their Bibles during worship on Sunday , leaving her land together the rest of the week. Men and women who gather and have many ministerial activities within their congregation, but who do not know God's Word and only put into practice what we manage to retain in cults .

Congregations that after 25 years to attend the church have not even read the Scriptures once .

[1 ] is the http://commons.wikimedia.org/wiki/File:Imperial_Circles_1512_en.png Silverhelm author of this image file . Its contents are based in part on a map published in the " Historical Atlas " by Prof. William R Shepherd , pub. Henry Holt & Co. (New York, 1911).
[2 ] It was archbishop of Magdeburg and Mainz , it Elector of the Holy Roman Empire and administrator of the diocese of Halberstadt .
http://es.wikipedia.org/wiki/Alberto_de_Brandeburgo

[3 ] History of the Christian Church, Jesse Hurlbut . Ed Life , p . 133
[4 ] Luther Bible was an expert in Medieval authors, had a university doctorate and taught at the University of Wittenberg.
[5 ] CATHOLIC ENCYCLOPEDIA : http://ec.aciprensa.com/wiki/Protestantismo # Uwolwvl5PA8 .