Study. The descendants of Ham , Part II. By Fabian Massa. 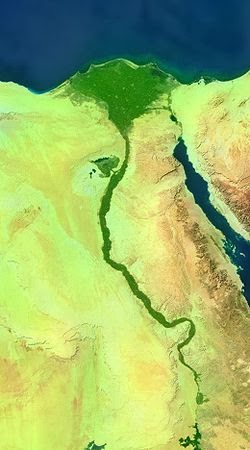 In previous post we have seen how the descendants of Canaan ( son of Ham ) ranked namesake territory [1 ] . In this work we see the foundation of the Egyptian culture [ 2] Mizraim and Put (second and third son of Ham , respectively and their descendants ) , and other cultures in North Africa , Sudan , Ethiopia, and Lud in Crete south coast of Turkey. It is for a next installment offspring of Cush.

The map on the left can be seen as the Nile river gives life to a narrow strip of land in the desert . Around this river has developed one of the most interesting civilizations in the history of mankind.

As we saw in post related to the dispersion of the descendants of Japheth [ 3] of the Semites [4 ] and Canaan [5 ] , these tribes settled their territory after 7000 BC

Similarly , according to archaeological evidence , the Egyptian civilization began to emerge towards the 6000 BC during the Neolithic period , which implies that the region began to be populated long before [6 ] . We have found evidence of human settlement on the border with Sudan before 8000 BC

Analysis of each people according to the biblical names :

Misraïm Heb . "Egypt " or " red land" . Second son of Ham (Genesis 10:6 , 13) and ancestor of the Egyptians. The Hebrew word probably refers to the two kingdoms of Egypt, the North and South . Mitzrayim in Hebrew comes from the word meaning meitzarím limitations.

Ludites : People connected with Egypt, migrated from North Africa to Asia Minor ( Turkey South Coast on the Mediterranean) and settled there ( Kingdom of Lud ) .

Anamites : People linked to Egypt south of Cairo. Heb . { Anamim , of uncertain meaning) . Tribe or region of Egypt ( Genesis 10:13 , 1 Chronicles 1:11) , has been identified with the great oasis of Kemet [ 7] ( Tierra Negra , name the Egyptians gave to their country).

Put / Fut ( Heb. Put , Put bab ~ ; elam Putiyap . Persian Putaya . ) . Fut ( Jer. 46:9 ) , progenitor of a people closely related to Mizraim (Egypt) and Cush ( Ethiopia or Nubia) . Egyptologists identify Fut ( Put * Jeremiah 46:9 ) with Punt, a country on the African coast of Somalia and Eritrea , where the Egyptians sent expeditions to obtain myrrh trees , leopard skins , ebony, ivory and other exotic products . There is uncertainty regarding the exact identification of Fut .

Casluhim : Pueblo tied to Egypt, possibly located in the west, on the coast of the Red Sea .

Caphtorites : People connected with Egypt, migrated and settled in the island of Crete ( most likely location ) . It is believed to be the Egyptian name Caphtor Crete.