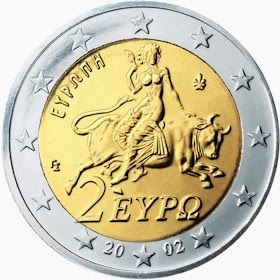 2 Euro coin with the image of the Phoenician princess Europa on Jupiter.

The Week 70 shares with us : The Statue, the Four Beasts and the New World Order (NWO) PART III.

In the previous two parts of this study [1 ] we saw these points in this third part will continue to expand :

The statue dreamed Nebuchadnezzar ( Daniel 2 ) is a system of World Government. Each of the four parts of it (head, chest / arms , thighs, belly , legs / feet ) represented a kingdom covering the entire known world then. The king's dream was in the second year of his reign (Daniel 2.1) , ie about 604 BC In the latter part of Nebuchadnezzar's dream , we can see that the statue 's feet were part of iron and part clay.
Daniel interprets that part of the vision is for very distant " future kingdoms " in the timeline:


43 As you saw iron mixed with ceramic clay , they will mingle with the seed of men : but they shall not cleave one another , even as iron is not mixed with clay.
44 And in the days of these kings the God of heaven set up a kingdom which shall never be destroyed, nor will it be left to another people in pieces and consume all these kingdoms, and it shall stand forever,
45 Inasmuch as you saw that the mountain a stone was cut out without hands , which broke the iron , the brass, the clay, the silver and gold. The great God has shown the king what shall happen in time to come , and the dream is certain , and its interpretation . Daniel 7.43-45 NIV .

From the above verse : " 44 in the days of these kings the God of heaven set up a kingdom which shall never be destroyed " it follows that refers to times of the end, and that the final kingdom will be the Lord's will remain forever, that Revelation is re- advertise in Revelation 20.

There is a correspondence between the dream of Nebuchadnezzar and Daniel's vision of chapter 7. The prophet shows " Four beasts rising from the sea " , this vision took place in the second year of the reign of Belshazzar , who was the last Babylonian king , known in history as Nabonidus . Belshazzar / Nabonidus became king in 556 BC Thus this view Daniel was at 555 a. C. fifty years after Nebuchadnezzar's dream .

Many years later, another prophet had the following vision:

13 And the dragon stood on the shore. The beast from the sea. Then I saw a beast rising from the sea , which had ten horns and seven heads . In each horn was a crown , and on each head a blasphemous name against God. 2 And the beast looked like a leopard, but had feet like a bear and a mouth like a lion . The dragon gave the beast his power and his throne and great authority.

From there a lot of information in this text , this time we will focus on this issue , to see close close relationship between :


2 And the beast looked like a leopard, but had feet like a bear and a mouth like a lion . John tells us that this Beast will have the characteristics of three of the beasts of Daniel 7 :


We see that in Revelation the beast by this reversed from Daniel 7. One explanation : Daniel saw from his mind the appearance of the four beasts , and in the future from its present Juan evokes the past.

Another detail is striking , if John evokes three beasts , the Beast that will rise from the sea will be a resurgence of the Fourth Beast , ie the New Roman Empire.
Looking at a map of the old Empire in the time of Christ and comparing it to the current EU we see that there are many similarities .

3 Then the angel carried me away in the Spirit into a desert. There I saw a woman riding a scarlet beast. The beast was covered with blasphemous names against God, and had seven heads and ten horns. NIV Revelation 17.3 .