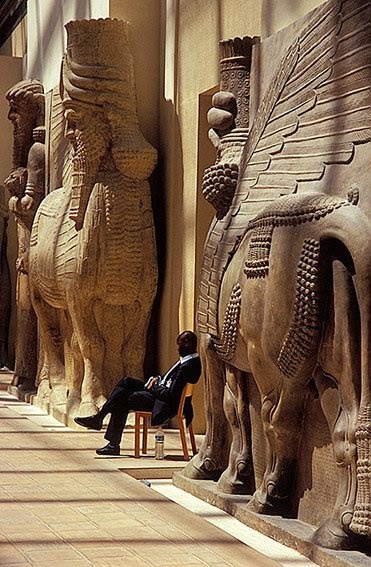 In chapter two of the book of Daniel (Daniel 2.1-48 ) , we read that in the second year of his reign ( ca. 603 BC) Nebuchadnezzar [1 ] had a series of visions that troubled him . The story told in the Bible says that King had a dream that he had disclosed. Immediately were called the "wise and Chaldeans " who were soothsayers and astrologers advising the king on various issues . The king demanded his servants to reveal the meaning of the dream , soothsayers replied that they would be happy once the king would deign to tell and there was the problem precisely : The king had forgotten his dream.


The problem , of course was the Chaldeans , Nebuchadnezzar understood that if they were truly wise men should be able to guess his dream. As none of them could do such a thing , Nebuchadnezzar decided to run them all . But Daniel asked the king to reveal the dream :

26 The king said to Daniel , whom the Babylonians had put her name Belteshazzar
- Can you tell me what I saw in my dream, and give me your interpretation?
27 Daniel replied :
- There is no sage or sorcerer or magician or diviner can explain to the king the mystery that will preocupa.28 There is a God in heaven who reveals mysteries . That God has shown you what will take place in the coming days. These are the dream and the visions that passed through the mind of His Majesty in his sleep : 29 There, in his bed , His Majesty turned his thoughts to the things to come, and the revealer of mysteries showed you what is about to happen . 30 As far as I am concerned, this mystery has been revealed to me , not because I am wiser than the rest of humanity , but that His Majesty reaches its interpretation and understand what was going through your mind * .
31 " In his dream His Majesty saw a huge statue of impressive size and awful. 32 The head of the statue was pure gold , chest and arms there were silver , its belly and thighs of bronze, 33 its legs of iron , as well as half of the foot , while the other half was of clay. 34 Suddenly , and while His Majesty stared at the statue, a rock dislodged anyone came and struck the feet of iron and clay of the statue, and shattered . 35 With them were shattered the iron, the clay , the bronze , silver and gold. The statue turned to dust , as the shortest in the summer when the wheat is threshed . The wind swept them away , and there was no sign of her . Instead , the rock that struck the statue became a huge mountain and filled the whole earth. Daniel 2.26 - 35 NIV .

Consider the data given in the Bible in this passage:

Nebuchadnezzar dreamed of a statue composed of four parts of different materials:

1. Head of pure gold represented the Babylonian Empire , Nebuchadnezzar II was the head. Gold is the most valuable, most noble and also the heaviest [2 ] material. In temporal terms , represented the present moment. You must read the time ran down to the bottom of the statue, meaning that your feet are the farthest in the future.

Two . The chest and arms of silver : Silver continues to value gold, and also in terms of their position in the periodic table of the elements, as it is lighter than gold . [3] This kingdom would lower the splendor and nobility of Babylon.

Three . The belly and thighs of brass : Brass is an alloy of copper and tin, was the silver value and represents a realm of less bright than the last.

April . The legs and feet of iron : Iron is the least valuable metal and the lightest [4 ] . The last realm and longest at the time line into the future. It would be the most cruel and hard, but towards the end of its divisions be presented ( toes of iron and clay , ie parts that can not be amalgamated and therefore weak )

Interestingly, two important points that back then :

I. This is a very different kingdoms statue over time .

II . In the dream a big rock that no human hand push, hit the statue and broke , while the rock became a mountain that filled the whole earth ( Daniel 2.35)
In the seventh chapter of Daniel , and in the first year of the reign of Nabonidus ( would have begun to reign in 556 . C. 539 BC until the year the Empire falls under Cyrus of Persia) sees visions of four beasts arise sea :

4 » The first was like a lion, but his wings were those of an eagle. As I watched , I ripped the wings, rose from the ground , and forced to stand on his hind legs like a man. And was given a human heart * .
5 " The second beast I saw resembled a bear. It stood on its side , and its jaws had three ribs . This beast is said, "Arise and eat meat until you sick ! "
6 ' Before my eyes I saw another beast appear , which resembled a leopard , but in the back it had four wings like those of a bird. This beast had four heads , and given authority to rule .
7 " After this I saw in the night visions a fourth beast before me , which was extremely horrible and had a huge force . With its large iron teeth crushed and devoured its victims and then stomping the remains. He had ten horns and not at all like the other beasts .
8 " While I noticed the horns , came up among them another horn smaller . Because of this they were uprooted three of the first . The little horn seemed to human eyes, and a mouth that spoke boastfully . Daniel 7.4-8 NIV .

The four beasts are four kingdoms of Daniel's vision confirms the dream of Nebuchadnezzar II and its interpretation by the same Daniel :

II . The bear ate limping and three ribs : The Medo- Persian Empire ( chest and arms of silver ) that their legs limp had different forces, one represented the Persians ( the strongest ) and the other leg to the Medes ( the weaker alliance ) party. The three ribs represent the three kingdoms Bear " had eaten " : a) Lydia ( on the south coast of Turkey) in 546 BC, b ) Babylon in 539 BC and c ) Egypt in 526 B.C.

III . The leopard had four wings and four heads : This is the Greek empire of Alexander the Great . The leopard is a smart , fast and strong feline, corresponds to the belly and thighs of bronze statue of Nebuchadnezzar II. A double winged leopard would be much faster , Alexander conquered the whole world of his time in just 12 years. Four heads : The army rested on four broad , that on the death of their leader the vast Empire were distributed.
The "smaller horn that spoke boastfully " was without a doubt, Antiochus Epiphanes , a descendant of Seleucus , one of the four generals of Alexander , who established his dynasty in Syria. Antiochus Epiphanes after subjecting Egypt passed through Palestine and caused serious injury to Jerusalem ( 168 BC ) by suspending worship and putting the Abomination of Desolation in the Temple Altar . (See 1 Maccabees Chapter 1).

IV. The Beast of uncommon strength : He had ten horns and was different from the other beasts , corresponds to the legs and feet of iron statue . It is a vision of the Roman Empire who defeated the Greeks in 168 BC and extended up to 476 A.D.

The vision of Daniel 7 confirms the dream of Nebuchadnezzar in Daniel 2 and extensive details. The statue of the dream had different parts and each was a kingdom . Each of the four empires at the time occupied the whole known world , imposing in his dominions a One World Order and all. In the second part of this study , see the parallel with the prophecy of Revelation 13 on the last New World Order.