Reflection. Monument to Satan in the Oklahoma Capitol . By Fabian Massa.

The cult of evil and 2nd Thessalonians 2 . 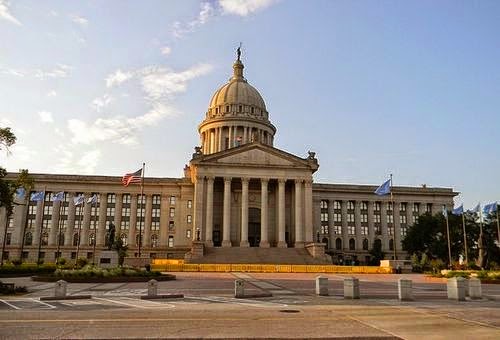 Week 70 shares with us : Monument to Satan in the Oklahoma Capitol .

In early 2014 , the Satanic Temple of New York requested permission from the authorities to place a monument to the devil on the Capitol grounds in Oklahoma , USA

The Oklahoma legislature in 2012 had authorized the placement in the Capitol of a monument to the Ten Commandments. In light of this, New York Satanists claim the same right to " Freedom of Worship " .

The Temple of Satan organized a collection for Internet and managed to raise $ S 28,000 ( had a goal of $ 20,000 D ) With this background solventaron building a statue of 2 meters .

The statue dedicated to satan would be represented as Baphomet , creature headed goat, woman's body , hooves and wings. Baphomet is positioned on a throne and surrounded by smiling children . " The monument is also functional : people of all ages can sit on the lap of Satan and given to reflection or inspiration ," say the authors of the project [1 ] .

Project leaders say the statue will fulfill the ornamental function " decorate " the Capitol. What is taking shape is the naturalization worship evil, make it look like normal, and even good and desirable.
Since Paul spoke of this with his disciples , when he explains that before the 2nd _Venida the Lord Jesus must come to pass the following ( on 2 Thessalonians 2 3 -12 . )

Rebellion against God (v. 2.3 ) . Rebellion against God is evident , the " Lay " system has brought to God ( and everything associated with him ) the social field.
And demonstrate ... Man of Evil (verses 3 by 4). This statue in Oklahoma is a foretaste of the manifestation of the Man of Evil and is a clear attempt to put the statue : You receive worship and honor , ie take the place of God receiving worship.
That is removed which prevents the open manifestation of the Antichrist : Paul reminds the Thessalonians that he had already explained to them that while " the ministry of Evil is already at work " ( as we see every time we read the newspaper ) , need to be removed which prevents the full manifestation of the Man of Evil (verses 5-9)

8 Then shall that Wicked be revealed, whom the Lord Jesus will overthrow with the breath of his mouth and destroy by the splendor of his coming. 9 whose coming is after the working of Satan with all kinds of miracles , signs and wonders . 10 With all wickedness deceive those who are lost because they refused to love the truth and so be saved. 11 Therefore God sends them a powerful delusion , believe a lie . 12 So all will be condemned who have not believed the truth but have delighted in wickedness . 2 Thess. 2.8 - 12 NIV .

Satan comes with an evil plan to trick those who have not believed the truth and if possible the very elect of God. You need to be strong and alert, Week 70 is about to begin .