Reflection. Signs of the End, also occur in nature. By Fabian Massa. 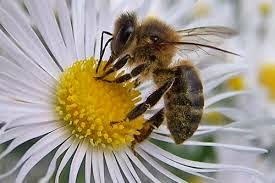 Week 70 shares with us: Signs of the End, also occur in nature.

Throughout the 24th chapter of Matthew (Mark 13, Luke 21), Jesus tells his disciples which would be the signs of the End Times:

The Gospel will be preached throughout the world, and only after that will come the end, verse 14.

And Jesus ends this section with this recommendation:

32 "Now learn this lesson from the fig tree: As soon as its twigs get tender and its leaves come out, you know that summer is near. Matthew 24.32 NIV.

The example leaves a clear message: The fig tree naturally prepares for the summer time, in the same way will anticipating the events of the End Times
24.6 In Matthew Jesus prophesies that there will be widespread starvation and is already established in the collective unconscious that the next fight will be for natural resources: water and food.

The June 29, 2014, in the newspaper El Pais in Spain, came a news caught my attention titled "Towards a world without bees" [1]

Here you hit a note excerpt: "In the late twentieth century a group of French farmers I got their attention an unusual phenomenon: the depopulation of hives because of the disappearance of bees, whose pollination depends largely global food production. Soon it was found that the phenomenon was global, at least in countries with highly developed agriculture, and a flurry of research has since sought to determine the causes, often disparate or contradictory results. Does the death of bees is due to monocultures or global warming? Virus?, Bacteria, fungi, parasites such as Nosema ceranae? Pesticides like? Neocotinoides, which came into use just two decades ago? Although there seems to be many opinions as experts in the field, it is possible that all have some truth. "

The disappearance of bees and other pollinators would make many of the crops are no longer viable. Many species disappear and affect the biodiversity of the planet. Then the famine would be widespread (Matthew 24.7)

It is time to seek God, to believe in His Word, because there will be salvation for those who believe, according to His promise, "13 but he who stands firm to the end will be saved" (Matthew 24.13 NIV).

Week 70 is about to begin, are we ready?


Bees in danger Hunger Matthew 24 Signs of the End