Study. "The Seven Cities of Revelation ." Ephesus. By Fabian Massa.

Chapter II of the book of Revelation, John relates that receives a message from Jesus that he should write and direct each of the Shepherds [ 1] seven churches of Asia ( modern Turkey) . In this brief study , we will see each of the cities . These churches were located in the following cities: 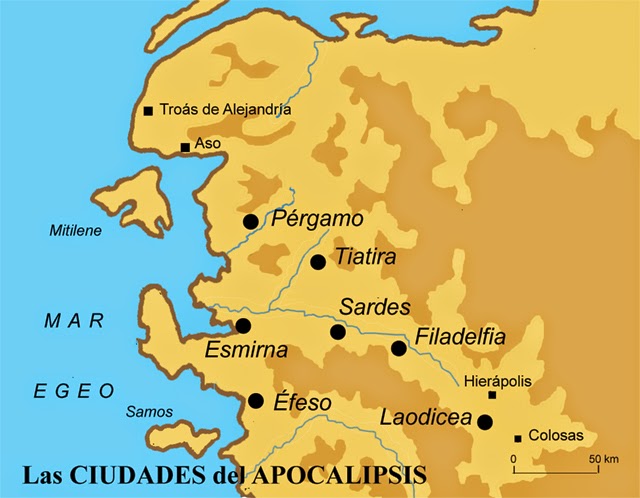 Ephesus [3 ]
(gr. Ephesus, "allowed" ) .
In Roman times , Ephesus was an important city, located at the junction of several trade routes and on the main road from Rome to the East. Was strategically important , had a port through which flowed much trade and was the seat of a powerful banking association . He was in the city the most important temple of Artemis or Diana [4 ] which became one of the 7 Wonders of the Ancient World. ( Acts 19 ) .

In Acts 18:19; 19:8 , 17, the Bible tells us that there was a significant Jewish community, whose synagogue began preaching at Corinth Paul 's return to Jerusalem (his 2nd trip). Later Paul stayed about three years in Ephesus preaching , giving rise to a Christian community solid enough then spread Christianity to other cities.
Ephesus was also famous for the practice of magic . In Acts 19 Paul gives some interesting facts :

· Relates that many citizens who believed the gospel brought their books of magic to destroy them. To give an idea of the amount , the Apostle clarifies that its value was about 50,000 pieces or silver coins , which would reach a weight of 180 kg of gold . This implies that magic was a widespread activity among the population .
· The passage:
13 But some of the itinerant Jewish exorcists tried to invoke the name of the Lord Jesus over those who had evil spirits , saying, We adjure you by Jesus whom Paul preaches. Hch.19.13 NIV

We can deduce that the number of people tormented by evil spirits was important enough to justify any " exorcists " .

In the next post we will see each of the other cities .

[1 ] Literally the "Angels " of Churches. The Spanish word Latin Angel Prevents the Angelus and the Greek ἄγγελος ( Angels ) meaning " messenger." The pastor is the person God designates as his messenger to give his word to the congregation.
[2] http://www.sobicain.org/imagen.asp?nombre=Villes_Apocalypse.jpg&idno=216
[3] http://www.bibliaonline.net/dicionario/
[4 ] This is the same goddess , Artemis is the name the Greeks gave Diana and which gave the Romans.


Ephesus the 7 cities of Revelation.