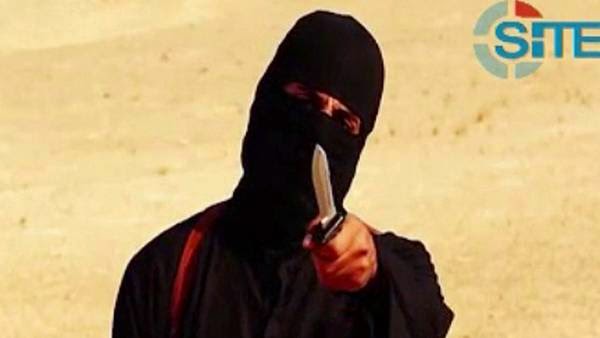 * 6 You will hear of wars and rumors of wars, but see to not be alarmed. Such things must happen, but not yet the end.

1 EI threat to the world.

EI Press published 22/09/14 on the Internet.
"If you can kill an American or European infidel, especially vindictive and dirty French, or an Australian or Canadian, or any of the unbelievers who fought the war, including citizens of the countries that joined the coalition against EI, then trust God and kill him anyway. ""Kill the infidel whether it's civil and military, since both are under the same government," "Allah watches." "Aplástale his head with a stone, or stab him with a knife or Run him with your car, or throw it from high place, or estrangúlalo or envenénalo ". "They will pay the price feeling afraid to travel anywhere, when walking through the streets, turning right and left, fearing Muslims.
"Minen (explosive) his ways, attack their barracks and homes, cut their necks, do not let them feel safe and their lives become a terror and hell," he encouraged. He said the group's spokesman, Abu Mohamed al-Adnani.

1 EI threat to the world.
The establishment of the Caliphate by EI, even released a map indicating that aims to extend territories [2], directly threatening to Turkey, Palestine, Syria, Israel, Jordan, Iraq, Iran, the entire Arabian Peninsula, Egypt, central and Northern Africa, Greece, Bulgaria, Ukraine, part of Russia, the republics of the former USSR, Russian territories, etc ... 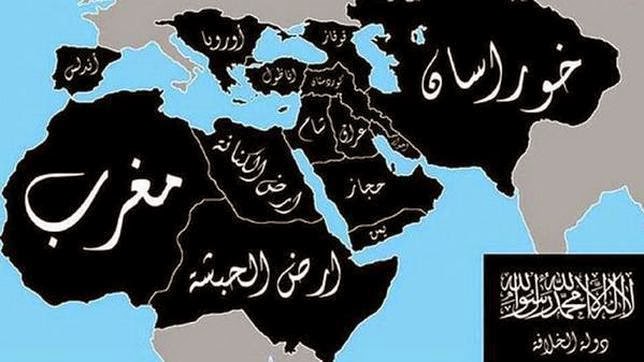 EI's strategy is to capture jihadists around the World, for which it has infiltrated all countries, especially in Europe, recruiting agents. These infiltrators have already achieved many Europeans join the ranks of the fighters in Iraq and Syria EI:

While no official figures, in December 2013 there were between 3,300 and 11,000 foreign jihadists fighting in Syria, according to the International Centre for the Study of Radicalisation (ICSR, according to its acronym in English) linked to King's College London.
It is estimated that between 30% and 40% of current foreign fighters who fight today to establish an Islamic caliphate in Syria and Iraq come from Western countries, such as France, Belgium, UK, Germany and the Nordic countries [3].

2. War Terrorism Worldwide.
Francis I is discerning that EI plans to unleash a Worldwide Terrorist War:

The pope made ​​the remarks during his homily at the military cemetery Redipuglia Fogliano, where he went on Saturday to remember the fallen of World War II, on the occasion of its centennial, and the victims of all wars.

"Today, after failure of the second world war, maybe he can talk of a third war fought" split "with crimes, massacres, destruction," he said.

Francisco said that war is "crazy" and trastornándolo growing destroying everything, even the relationship between brothers and "the most beautiful thing God created" human beings [4].

Intelligence services of all States are already on alert, knowing that it is likely that many European jihadists now fighting in Syria and Iraq, to return to their home countries to unleash terrorist campaigns.

9 "Then deliver you up to tribulation and kill them, and hated by all nations because of my name.

They are pursuing strategies to prevent further recruitment EI people and try to anticipate any attack on their territory:

* 11 and arise many false prophets will appear and deceive many.

British Prime Minister David Cameron, announced Friday increased the terrorist threat to "severe" level. It is the second highest level of alert declared in three years in the UK and Northern Ireland. The announcement is due to fear of militants prime minister of the Islamic State (EI) with British-about 500, according to estimates by the intelligence services return to the country to carry out attacks on British soil [5].

b. SPAIN.
09 SEPT 2014 EFE MADRID 20:51 hours
The Interior Ministry of Spain has raised the level of intensity, from low to high within the terror alert level II to prevent any action of Jihadist terrorism intend to threaten Western interests.

REUTERS 14 SEP 2014 | 5:13 GMT
Australia deployed troops and aircraft in the UAE under the US strategy against the Islamic State, announced today by Australian Prime Minister Tony Abbott [7]

SIDNEY 18 SEP 2014 - 15:11 CEST
Australia police yesterday arrested 15 people suspected of Afghan origin plotting a terrorist attack in Sydney. According to informed sources in the security forces, detainees had received orders from the Islamic State (EI) to kidnap and behead people in Sydney and Brisbane, Australia.

The newspaper points to a case in which the Attorney General of Belgium discovered that there was a "concrete plan of attack" and acted to dismantle it, while otherwise intervened although concrete projects were unknown attacks.
The sources cited by the newspaper did not provide financial details, but said that potential attacks could have been "comparable" to happened at the Jewish Museum in Brussels on 24 May, when four people were killed.
A few days later in France stopped the alleged perpetrator of the attack on the Jewish Museum in Brussels, the French-Algerian Mehdi Nemmouche suspected in Syria also been integrated in the jihadist group Islamic State.

"L'Echo" estimated that at least 90 Belgians who have participated in fighting in Syria have returned to Belgium, and that until 400 national might be moving to the country to join the fighting. EFE [8]

The risk of a 'Terrorist War' Worldwide is real when you consider that young Europeans who have potential to become active members of EI are Muslim men between 18 and 35 years. Most had become-or begun to practice Islam recently and had not gone as fans [9].

WORLD Berlin Updated: 17/09/2014 11:31 pm [10]
The Islamic State (IS) has about 20,000 members, 2,000 of them from Europe and among which "probably 400 are from Germany", according to the German Government.
With various life stories behind them, captured in Salafi mosques in central and western Germany, come to fight alongside terrorists IS in Iraq and Syria, and agree to participate in suicide missions to spread terror among the Kurdish population. In an interview on German public radio, the chairman of the intelligence services abroad, Hans-Georg Maassen, has reported that it transpires that at least five of the jihadists who have traveled to Iraq from Syria and Germany have staged and suicide bombings. They are the bravest members of the Islamic militia and their fellow Islamic state refers to them as 'The Almani [German, Arabic]', a name that causes chills among Kurds.

Considering how much Islam has spread worldwide, we understand that the "Recruiters" EI have a wide audience from which to draw future members of terrorist cells:

* 10 At that time many will turn away from the faith; betray one another and hate; There will be 12 of wickedness, the love of many will grow cold, 13 but he who stands firm to the end will be saved.

Week 70 is about to begin. Each report in the media shows how rapidly approaching End of the Age. The question is, are we ready?