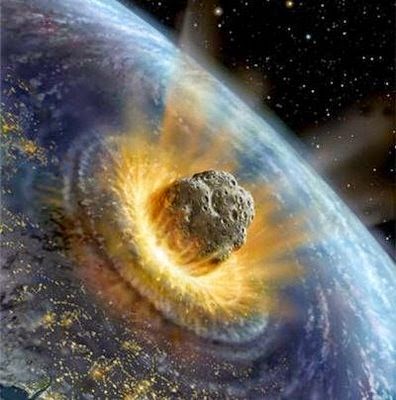 The fifth angel sounded his trumpet, and I saw that he had fallen from heaven to earth a star, which was given the key of the bottomless pit. He opened it, and added a smoke pit, like a great furnace; and the smoke obscured the sun and air. Of the smoke locusts came down upon the earth and were given power like that of scorpions of the earth. They were told not to harm the grass of the earth or any plant or tree, but only those who do not take on the brow the seal of God. They were not given permission to kill them but only to torture them for five months. His torment is as produced by the bite of a scorpion.

In those days people will seek death but will not find it; shall desire to die, but death will flee from them. The appearance of the locusts was like horses prepared for war. Wore on his head something like crowns of gold, and their faces resembled human faces. Their hair was like women's hair, and their teeth were like lions. Had breastplates like breastplates of iron, and the sound of their wings was like the sound of chariots of many horses rushing to battle. They had tails and stings like scorpions, and in their tails they had power to torment people for five months. The king who led them was the angel of the Abyss, which in Hebrew is Abaddon and in Greek Apollyon.

Revelation 9.1-11 From the spiritual point of view, the meteorite impact broke his deep cover Bottomless Pit, and demons in the shape of locusts tortured "unbelievers". It is an image taken from the army of locusts Joel 2:

2 A day of darkness and gloom, a day of clouds and thick darkness; on the mountains as the morning spread, will come a great and mighty people; like he had not occurred, or after he will be the years of many generations.
3 Before them fire devours, behind them a flame burns; like the garden of Eden the land before them, and behind them a desolate wilderness; nor is there escape them.
4 Your appearance as the appearance of horses, and as horsemen run.
5 Like the noise of chariots on the tops of mountains; Sound like a flame of fire that devoureth the stubble, as a strong people set in battle.
6 Before their face the people; all faces shall gather blackness.
7 How brave they will run like soldiers climb the wall; march every one on his way, and not break their ranks.
8 None jostle his companion, each going his own career; and when they fall upon the sword, they shall not be wounded.
9 Iran over the city, they run upon the wall, climb into the houses, they enter through the windows like a thief.
10 Before him will shake the earth, the heavens tremble; the sun and the moon are darkened, and the stars withdraw their shining.
John heard the name of the Angel of the Abyss that ruled these terrible creatures in Hebrew is Abaddon and in Greek Apollyon.

99942 Apophis (From WIKIPEDIA [2]) was discovered on June 19, 2004 by Roy A. Tucker, David J. Tholen, and Fabrizio Bernardi from Kitt Peak National Observatory in Arizona (EE. UU.). Could only be observed for two nights, and not seen again until, on 18 December the same year, was rediscovered by Gordon Garrad from Australia. In the days that followed, other observations from various parts of the world allowed the Minor Planet Center to confirm the connection between the two discoveries.

It belongs to the group of Aten asteroids asteroids orbit with a semimajor axis less than one astronomical unit. In particular, Apophis has an orbital period of 323 days, his career leads him to cross the Earth's orbit twice on each orbit the Sun. NASA estimated its size at 325 meters.
Shortly after its discovery, various systems for calculating trajectories calculated worldwide the next date of closest approach, they all coincide in the April 13, 2029 On this day, Apophis will shine like a star of magnitude 3.3 (visible to the naked eye). This approach will be visible from Europe, Africa and western Asia.

Various systems for calculating trajectories show that the next date of closest approach will be the April 13, 2036, experts predict that in the event that Apophis will impact the Earth, you would somewhere in a very wide area between Kamchatka peninsula (Russia) or in the region of Venezuela.
Then we also calculated the probability of impact. Contrary to usual, in the early days made ​​new observations increase the likelihood of impact, rather than reduced, reaching 2.7% (1 in 37). This relatively high probability combined with measurement of the asteroid Apophis made ​​would receive level 4 on the Torino scale and 1.10 on the scale of Palermo. These values ​​are higher than any asteroid ever gotten.

On December 27, Apophis was found prior to the date of discovery images and the calculation of its orbit could be tuned, eliminating any possibility of collision to 2029, while maintaining a certain risk for 2036.

The B612 Foundation made ​​estimates of Apophis route would follow if the impact were to occur in 2036, as part of an initiative being undertaken to develop a viable strategy to deflect the asteroid enough anticipación.4 The result is a narrow corridor approximately few kilometers wide, called the "path of risk", which is located in the southern part of Russia, cross the Pacific, passing hundreds of miles off the coast of California and Mexico, and then would proceed to Costa Rica, continuing the Caribbean Sea to cross the northern regions of Colombia and Venezuela, ending its journey in the Atlantic, just before reaching Africa.

The May 6, 2006, when the asteroid was at 42 million miles from Earth, NASA astronomers measure your speed again by Arecibo (Puerto Rico). The result was different than expected on 6 millimeters per second. This correction may seem tiny, will eventually be large enough so that the asteroid's trajectory is different from the originally estimated, reducing the risk of impact with Earth.

Apophis is one of the two asteroids into consideration by the European Space Agency and the objective of the Don Quijote mission to study the effects of an impact with an asteroid.

Apophis is the Greek version of the Egyptian god Apep (sometimes also called Nike). It is the serpent god, lord of the night. Their mission was to prevent had Day ie engulf the entire Earth into perpetual darkness. A destructive demon.

Bible prophecies of John of late first century intersect with scientific prophecies of the century. Apollyon, Abaddon or Apophis in Greek, Hebrew and ancient Egyptian means the same, Demon of Destruction. Week 70 is about to begin, the Endtime is getting closer. Only Cristo saves us. Are we ready?