Reflection. Promoting mediocrity, a highway to the NWO. By Fabian Massa. 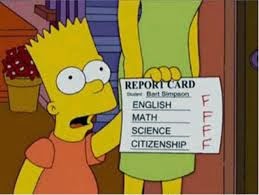 Week 70 shares with us: "To promote mediocrity, a highway towards the NWO."

The Bible says that in the future (perhaps not so distant) Satan will finally be able to establish the New World Order. I say finally because it has already made some attempts have failed, Daniel prophetically spoke about this in Chapters 2 and 7 [1]. In the chart below we can see these four attempts: 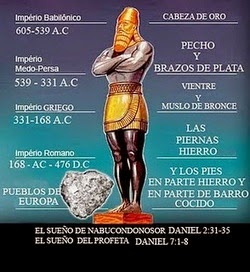 As we can see at the bottom of the statue [2] indicated that his feet are partly iron and partly clay, according to Daniel 2.41 - 43 "41 ... .. The feet and toes of the statue were half iron and half clay. The iron and clay, which His Majesty saw mixed mean that this will be a divided kingdom, but will have the strength of iron. 42 And as the toes were partly iron and partly clay, this kingdom will be partly strong and débil.43 as you saw iron mixed and mud, two elements that can not be merged together. Similarly, the people will be a mixture which may not hold together ". NVI.

If we read the passages carefully you'll notice that the last beast is the establishment of the NWO Satan capitalized and see your previous attempts making the best of each:

The speed of the leopard (the Greek empire) will be treated in a logical system based on the enthronement of reason quickly Copara "Worldwide" by imposing a uniform culture (in the same way he did with his concept of Alejandro "Greek World"). Same culture, same religion, same feel and overall administration: Summarizing the NWO.
The feet of a bear, be a result of strong government international partnerships that will end all political and military strength, in the same way that in his time the Persian Empire destroyed the three kingdoms that could offer resistance (Lydia in 546 BC , Babylon and Egypt 539 BC 526 BC).
Jaws like a lion: Will have a particular characteristic of the Babylonian Empire, all-devouring (looting) The NWO plunder the riches of the world to distribute it among a few. Something that is not new, and in 2013 report by the British charity Oxfam, the richest 1% of the planet has more than half the world's wealth: 85 millionaires have much money as the 3.57 billion poorest people [2]

Another detail is striking, although John recalls three beasts, the beast will rise from the sea to be a resurgence of the Fourth Beast, ie the New Roman Empire.
Looking at a map of the ancient empire in the time of Christ and comparing it to the current EU we see that there are many similarities [4].

And what are the strategies for this to be true? Number, we can name the management of information, access to natural resources, communications (which are part of the recently developed as "Social Media"). But there is something else that is perhaps not obvious: Encouraging Mediocrity.
What is this strategy? Simply keeping the people in ignorance and mediocrity, fulfilling these two points:
Making the public is able to handle the technology, but through technological tools - in cell / tablet internet is PC- and are already handling the masses, and by these means they hope to achieve the control and enslavement.
Not teaching them to think, rather than learning to understand the texts.

If we think this way is understandable why Worldwide is being taught increasingly more diluted fashion to the masses, and more comprehensive and demanding the ruling classes: For a few manage to most. So you are looking for in the countries (especially developing) that the quality of education given to the lower social classes must be the poor and mediocre as possible so that the distance between them and the high class remains unchanged in the time and it is impossible to achieve genuine equality of opportunity for all, "Someone who is not able to understand why things will also be unable to judge (or discuss)."

Unfortunately in churches has infiltrated the political leaders are asking members to "please read two verses per day [5]," and Bible school many senior students know little or nothing, and have no capacity text comprehension [6]. If future pastors and teachers do not understand, is left for future congregations.

In the meantime, Mega false teachers and pastors, some of whom call themselves "apostle" travel the world delivering "Power Statements" and "giving" Cults of Miracles "(though rarely happens any) where the only beneficiaries are the ones who live like princes.

The role of the Church is to form priests in their home, men who can read and interpret the Scriptures, they can understand the Word to perform it, they can teach their wives and children the way, and for this it is necessary to read and study the Bible. If you can not read, will be taught. Jesus' disciples lived with him three years, witnessed miracles, signs and wonders, but when Jesus has risen Gloria Sunday, none of them could recognize nor could believe (See all Luke Chapter 24 ). And Jesus himself had to teach them to read and interpret the prophetic word [7], here we understand that to have true faith, we need to eat the Bible as it is written, "Faith comes by hearing and hearing by the Word of God "(Romans 10.7).

Week 70 is about to begin, the times are already fulfilled. By preaching many will be saved or lost. Preach salvation, we encourage people to read and study the Bible.