Reflection. The reason for dates, locations and geopolitical situations in the Bible. By Fabian Massa. 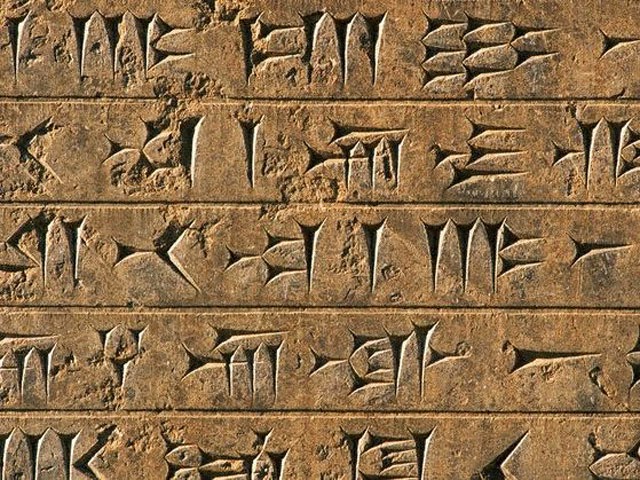 Dedicated to my friend Mauri, who is always hungry to learn more.

If you read the Bible carefully, we see that generally each story God has sought ways to locate us in time, in space and events:

August 10 river flowed from Eden to water the garden, and from there it was separated into four headwaters. 11 The first is Pishon, and through the entire land of Havilah, where there is gold ...... 13 The second was called winds through the entire land of Cush. [C] 14 The third was called Tigris, which ran east of Assyria. The fourth river is the Euphrates. Gen. 2.8-14 NIV.


Of the four rivers that indicates the passage, the Euphrates and the Tigris are easily located and give us the certainty that the region of Eden was in Mesopotamia, and the Garden was somewhere in the eastern part of the region.
It is also important to recognize that area geographically because it almost all the events of the Old Testament will be developed: 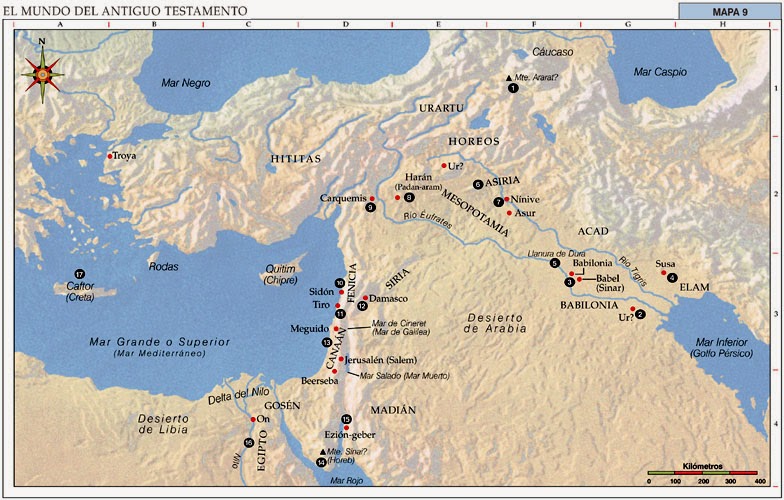 If we read the prophets, we see that the Lord gives us the period in which they prophesied. Take, for example Isaiah:

In Isaiah 6 we read how the prophet received his call and gives an important fact, that was the year of the death of King Uzziah, so we can deduce that Isaiah would have begun almost his ministry the end of the reign of Uzziah, which his ministry would have extended for more than 60 years, from about 750 BC to 690 B.C. The power that dominated the Middle East was Assyria, as reflected in some passages, eg [1]:

Isaiah 7:17 The LORD will bring on you and on your people and your father's house, days that have not come since the day that Ephraim departed from Judah; even the king of Assyria.

Isaiah 8: 7 Behold, therefore the Lord bringeth up upon them the waters of the river, strong and many, even the king of Assyria and all his glory; he shall come up over all his channels, and go over all his banks;

Isaiah 10: 5 O Assyrian, the rod of mine anger, in their hand is mine indignation.

Isaiah 36: 1: to pass in the fourteenth year of King Hezekiah, Sennacherib king of Assyria came up against all the fortified cities of Judah and took them.

Isaiah 36: 2 And the king of Assyria sent Rabshakeh with a great army from Lachish to Jerusalem unto king Hezekiah; and camped along the aqueduct of the Upper Pool, on the road to the fuller.

In the time of Hezekiah the Kingdom of Judah had fallen sharply because Assyria had conquered many lands, even in 722 BC It took the Northern Kingdom and destroyed Samaria, 2 Ki. 17

In http://es.wikipedia.org/wiki/Sarg%C3%B3n_II we can expand more historical data on Assyria

Sargon II (reigned between 722 and 705 BC.) Was a king of Assyria. He received the throne of Shalmaneser V in 722. C. It is unclear whether the son of Tiglath-Pileser III or a usurper of the throne outside the royal family.

Sargon II became king of Assyria during the New Kingdom. He ascended the throne after the death of Shalmaneser V. It probably was a usurper, but-according to a text that has preservado- claimed to be the son of Tiglath-Pileser III. In any case, seized the throne by violence, and its advent marked a break with the past, because in none of their inscriptions mention of his predecessors is made. It was a powerful king, a great conqueror and founder of the most important Assyrian dynasty rulers, under whom the empire reached its greatest triumphs.

Known for its mention in the Book of Isaiah (20: 1), was the first Assyrian king whose name was deciphered in the mid nineteenth century when Assyriology was still in diapers, which was a success for biblical archeology.

His first season in the 722. C., meant the conquest of Samaria, though perhaps dropped earlier, when it was only army commander Salmanasar 720 V. a. C. intervened on two fronts at once: in Babylon, to cut aid to Berodachbaladan was receiving the Elamite Ummanigash, and against a Syrian-Egyptian coalition reconquering rebel provinces of Arpad, and Damascus Simirra.

Below is a map of Assyria Sargon II times 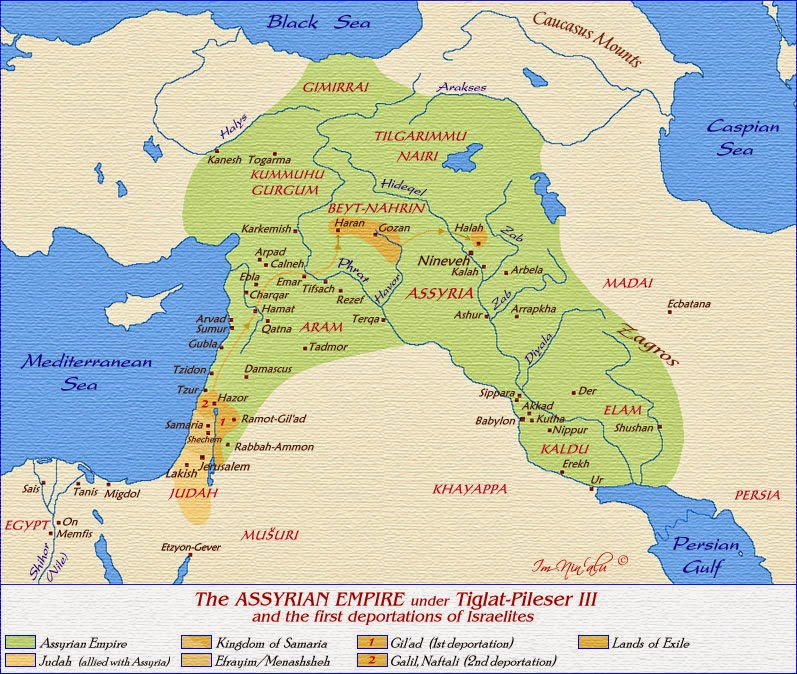 If God allowed the Bible has historical, geographical, geopolitical data, it is for us to consider. Only by knowing the history can understand the anticipation of prophecy to its historical fulfillment, this fulfillment is what authorizes the prophecy, which reveals that God is God. So he himself says:

Isaiah 42: 9 Behold, the former things are come to pass, and new things I declare; before they spring forth I tell you of them.

Isaiah 45:19: Do not spoken in secret, in a dark place of the earth; I did not say to the seed of Jacob, seek ye me in vain. I the LORD speak righteousness, that righteousness AD.

Isaiah 46:10: Declaring the end from the beginning, and from ancient times things that are not yet done; I say: My purpose will stand, and I will do what I want;