Study. Ulrich Zwingli and the Reformation in Switzerland. By Fabian Massa. 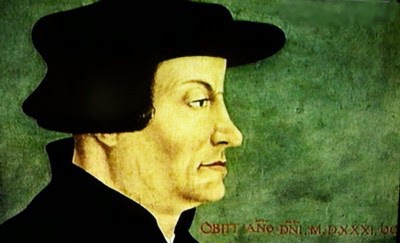 The first lessons gave them his uncle Bartolomeo Weesen. He attended studies in Bern before attending the University of Vienna in 1499. From there happened in 1504 to the University of Basel, where he completed his degree in 1504 and a doctorate in theology in 1506.


With his new degree was a priest in Glarus, where he studied Greek and Hebrew. At that time he also received the influence of humanist Erasmus of Rotterdam. By studying the Scriptures from the standpoint of humanism came to the conclusion that many of the doctrines of the Church were in contradiction with the teachings of the New Testament. Zwingli go slowly drawing the conclusion of the need for reform of the Church, even independently of Martin Luther.

Between 1508 and 1516 the War of the Holy League of Cambrai, that involved almost all European countries got rid of her time: France, the Papal States, the Republic of Venice, Spain, the Holy Roman Empire, England, Scotland, the Duchy of Milan, Florence, the Duchy of Ferrara and Switzerland. Since 1512, the Swiss Confederation various armed contingent sent to war in favor of the Papacy (who obviously paid salaries) had to face the French troops in Lombardy during the War of the League. Zwingli accompanied the troops as Swiss Army Chaplain and witnessed the victories of Pavia and Novara, but also the defeat of the Confederates at Marignano, from which his preaching against the Swiss custom of fighting as mercenaries , claiming that they were losing many lives and resources in wars that were not their own.

The current "Swiss Guard" that protects the Pope is rooted precisely in the sixteenth century, Pope Sixtus IV had made an alliance with the Swiss Confederation and built barracks in "Via Pellegrino" foreseeing the possibility of recruiting Swiss mercenaries.

In 1516 began to preach in the Abbey of Einsiedeln, who was one of the busiest pilgrimage centers and superstitions. Thus begins his preaching against these practices and against the dealer in indulgences Bernardin Samson, who had arrived in Switzerland at the request of the Pope in 1518. On January 1, 1519 began operating in Zurich, where his clear and direct speech is explaining to parishioners the gospels. The city government decided to support the new courses in 1520 and has all the preachers act along the lines of Zwingli.

This is one of the big differences between the Reformation of Luther in Germany and Zwingli in Switzerland: While Luther was persecuted by Carlos V and his government towards Rome, the Swiss had the political support of the ruling class from the start.

In 1522 Zwingli published his first reformatory work, directed against the fast of "Lent" advocated by the Church of Rome, which forbids eating meat. Zwingli writes against this Roman tradition and at the same time another letter was sent by him and ten of his companions to the Bishop of Constance, which affirmed their willingness to continue preaching the Gospel and as calling for the abolition of celibacy. Pope Adrian VI tries to convince him not to undertake further actions that violate the substance of Catholic theology.

In the prosecution of the Dominicans of Zwingli spread heresy, the Grand Council of the City convened the First Zurich Disputation on January 29, 1523 a large number of theologians. In the discussion, it would be public, should discuss the thesis defended by Zwingli. It was attended by 600 people between clergy and laity. As happened with Luther, the envoys of Rome put an emphasis on the traditions and teachings of the "church fathers" and Councils, however Zwingli defended his position with Scripture (as did Luther in his opportunity) the authorities gave the reformist victory dialectics and envoys from Rome suffered a great defeat.

Would not that, however, the only official and public dispute held in Zurich:

There was another in October 1523 where the need to remove the images from churches, decision just adopted and will be implemented in a gradual manner discussed.
Also in January 1524 the topic was the Mass and its possible abolition, which was finally established.

Zwingli That same year he married the widow Anna Meyer, with whom he lived marital way for some time. The Reformation in Zurich affected the whole society of his time: the school system, marriage, customs, etc. Zwingli's role is crucial in this process, because although organic assumes no office, his charisma and his preaching among the people will become a key figure in the process.

In 1525 Zwingli published his confession of faith (Of true and false religion). His theology, which coincides with that of Luther in many basic aspects, operates in a more radical way in others, such as the question of the Eucharist, in rejecting Zwingli's real presence of Christ in communion. From 1525, the Reformation in Zurich is completed:

That year, 1525, a school for theologians, biblical exegesis where they can learn, later used in his sermons to the people is also based on Grossmünster.

Important for Zwingli's theology is his conception of the relationship between the secular and religious power, because while it is considered right and duty to organize the earthly Church and society, on the other hand supports the ability to overthrow the ruling group if it does not behave properly to the teachings of the Gospel way.

Relations with the German reform movement led by Luther and Melanchthon, are hindered by the conception that both parties are on communion. These differences become insurmountable clearly the most important attempt is made to combine positions, when in October 1529 the Landgrave Philip I of Hesse invites Zwingli and Luther to a theological discussion (known as the Marburg Colloquy).

Although the first Peace of Kappel in 1529, tensions between Zurich and Bern (which was won by Zwingli for movement) on one hand and the cantons remained Catholic, on the other, could not help bursting into a political conflict - and ultimately also armed, the Wars of Kappel. The choice of Zwingli was clear in this regard: use weapons to spread the Gospel truth was a duty of every good Christian. Finally the conflict erupts October 11, 1531 Zwingli fell in battle near Kappel am Albis.