Reflection. The growth of Islam in the World. By Fabian Massa. 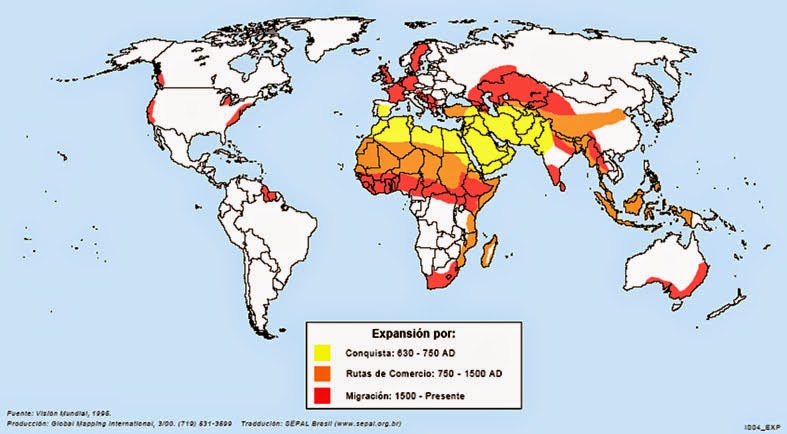 Week 70 shares with us: "The growth of Islam in the World".

According to a recent study by the Pew Research Center [1] in 2050 the number of Muslims will be similar to that of Christians and overcome decades later. The news [2] was published in newspapers on April 7, 2015.

"A study by the Pew Research Center, in 40 years the Christians will still be the largest religious group, but Islam will bring in many faithful 2050, then get over the end of the century."

The report reveals that, according to statistical projections, Islam achieved exceed the number of Christians in the world because they have the highest proportion of young population and the highest fertility rate among religious groups. But there is an important detail that comes out of this information and which does not record The Pew Research Center and is as follows:
"The sons of Islamic remain in their faith and also form their families in their faith. It is an important fact because they unlike Christians do not "Evangelism" and despite this end up being greater in number. "
If in Christian families the same thing happened, and each of the children were firm and in turn formed his own family on Christian principles, adding this to evangelization, Christianity would grow at the same rate as Islam.
In the Christian world are putting greater emphasis on evangelism "out of home", but if we do not become believers who make your home a fortress in Christ, the Kingdom may be large but full of holes, where he will casting the spirit of this world.

How to train believers to transform her family in a Christian stronghold?

· With solid, methodical, orderly education. With "less Songs and more Bible."
· Leaving the education of teachers and preparing workers to have a strong Church Doctrine.
· Teaching the faithful to understand the Scriptures themselves.

[1] The Pew Research Center (in English: Pew Research Center) is a Laboratory of Ideas (center for studies and research) based in Washington, DC that provides information on issues, attitudes and trends that characterize the United States and the world.
http://es.wikipedia.org/wiki/Pew_Research_Center
[2] http://www.lanacion.com.ar/1782167-un-mundo-islamico-sera-la-mayor-religion-a-fin-de-siglo