Reflection. How to deal with the apathy of the Congregation. By Fabian Massa. 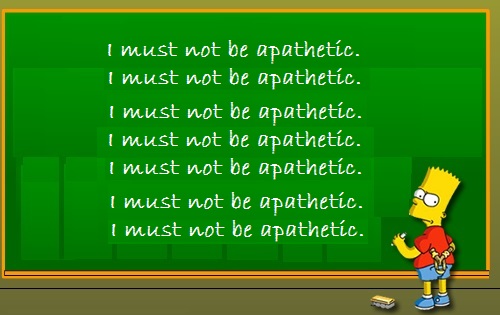 Difficult subject if any, how to treat the apathy of the Congregation for the Word of God? How to deal with the religious vision that has been installed in the Evangelical Church, which she sings God declares that "For a moment in your presence everything would [1]" but then do not read (unless study) in decades Bible?

It is a problem that plagues the Church in every generation. Also at times the author of the Letter to the Hebrews:
11 We would like to say much more on this topic, but it's hard to explain, especially since you are spiritually dull and it seems that they do not listen. 12 causes that are both believers and should be teaching others. Instead, they need someone to teach you the basics of the word of God. [C] They are like little children who need milk and can not eat solid food. 13 For he who eats baby milk still does not know how to do right. 14 Solid food is for those who are mature, who by dint of practice are able to distinguish between good and bad. Hebrews 5.11 - 14 New Living Translation (NLT)


On this passage says William Barclay: "It often happens that we avoid making it difficult to teach; we defend ourselves saying it is that our students are not going to understand. It is one of the tragedies of the church so little effort is made to teach new knowledge and thoughts. True, it has its difficulties. It is true that sometimes confronts one with the <Glanders "of lazy minds and prejudice militants closed minds. But the task is challenging us. The author of Hebrews scampered not give his message, even if it was difficult and awkward the minds of students. He considered his ultimate responsibility was to convey the truths he knew. His complaint was that long ago that his readers were Christians, but they were still babies, still far from the majority. The contrast between the mature Christian and child, or between milk and solid food, appears frequently in the New Testament (1 Peter 2: 2; 1 Corinthians 2: 6, 3: 2; 14:20; Ephesians 4 : 13ff). Hebrews says that by then, ought to be teachers. This should not be taken literally. To say that a person was qualified to teach was the Greek way of saying that sufficiently mastered a subject. The author says that still need someone to teach you the simple elements (stoijeia) of the Gospel "[2].
The Bible tells how we manage in all situations and at all times. For those who are called to teach and to "feed" our fellow servants, the example to follow is the author of Hebrews, who did not hesitate to confront his congregation and also fell into the trap of vicious circle in which they are immersed most Ministers:

I DO NOT UNDERSTAND THE CONGREGATION (NOT FOR STUDY) BECAUSE IT IS NOT taught anything new or COMPLEX.

II. Because I not taught anything new or COMPLEX, THE CONGREGATION AND IS NOT MEANT NOTHING apathetic.

The "recipe" of the author of the letter in question faced the situation bravely, showing the Church 11 On this topic we have much to say but it's hard to explain, because to you what they will go in one ear out the other. 12 Actually, at this point ought to be teachers, yet you need someone to teach you the elementary truths of God's word. (Heb. 5.11-12 NIV). "Apathy" of the Congregation to study and understand the word not only makes an ignorant, religious and boring Congregation but is reflected in beliefs "Tibias" over sin:

4-6 is impossible to renew their repentance those who have once been enlightened, who have tasted the heavenly gift, who have shared in the Holy Spirit, who have tasted the good word of God and the powers of the world to come, and then it all turned aside. It is impossible, because that recrucify for their own evil, the Son of God, and exposed to public shame. NIV Hebrews 6.4-6.
According to Hebrews, who understand that it is sin and so everything is determined to continue sinning systematically definitely lose their salvation.

It is the responsibility of the feed Ministrodar time to fellow servants [3], because "The fault is not the chanchosino which feeds him [4]." However, once the congregation is well fed, the responsibility is wanting to grow each and the Minister and can not be convicted if they remain ignorant.

Please give food to the people what they need to grow. Week 70 is about to begin, people are hungry, do not give them more "Cults of canapes [5]."