Investigation. The Fifth Column is leaving. By Fabian Massa. 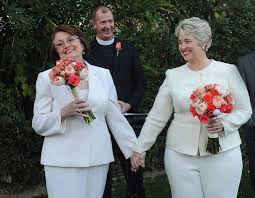 Investigation. The Fifth Column is leaving. By Fabian Massa.

Before entering the subject, we must understand that is the LGBT and Fifth Column:


Recent times have become dangerous, as well prophesied the Apostle Paul [2] and the Church began to suffer attacks from both the domestic front (the 5th Column) and the external, there were three cases of great social resonance:

I. He appeared first published on November 28, 2013 in all media: "The British Church proposes celebrate gay marriage". The clergy of the Church of England began to recognize marriages between same-sex couples. The Anglican church has about 80 million members worldwide and withdraw its ban on gay clergy who have a civil relationship become bishops.

II. The second was in the Hillsong Church in New York when Josh Reed and Kelly Canfield, both gay and Ministers of praise ended up marrying the middle of 2015. The new stance of the most influential churches in the US It is not to confront homosexuality in their congregations. Partly because the position of the majority of the population is much more permeable to homosexuality than 15 or 20 years ago; and because there are many homosexuals in churches and fear confront them with what the Bible says about it and be accused of discrimination, especially when the law supports and even encourages homosexual practice. The Episcopal Church of the United States announced the approval of 03.07.2015 marriage ceremonies between same sex, a few days after the Supreme Court legalized the practice throughout the country. "As permitted by law, the canons allow from now on marriage within the church to all couples," said the Episcopal Church in his Twitter account while celebrating its general convention in Utah. However, the Episcopal Church does not force the clerics who have objections to officiate the ceremonies, he said. On March 18, 2015, the Presbyterian Church USA It approved the re-definition of marriage in the constitution of the church, by making a "commitment between two people '', becoming the largest Protestant group in the United States to formally recognize gay marriage.

III. The third occurred on October 5, 2015 when the Official Vatican Theologian, Krzysztof Charamsa left the closet and declared himself openly gay. The Polish priest was an official of the Congregation for the Doctrine of the Faith-the former Holy Office and deputy secretary of the International Theological Commission. After his statements was removed from his ministry, and in statements to the press encouraged "so many gay priests who do not have the strength to come out of the closet", implying that the Church of Rome there are a lot of covert homosexuals serving ministerial functions.

Fifth Column "Christian" (which is not only made up of gays, but many people who through ignorance of the Word want to establish equal rights within the church, wanting to match according to the World ignoring what Scripture says ) pressed from within to that homosexuals can access the reserved for heterosexuals as marriage, parenthood, to have a "normal" family and also occupy "ecclesiastical positions." Meanwhile the strong and powerful International LGTB press from outside the Church, here some cases of resonance World:

I. October 2014 Two Christian pastors in Coeur d'Alene, Idaho (United States), had to face legal punishment or be forced to sell their wedding chapel nearly 100 years, for refusing to perform ceremonies " "homosexual [3] marriage.

II. October 2014: The mayor of Texas Annise Parker, openly lesbian, has demanded that a group of pastors deliver sermons dealing with homosexuality or gender identity and according to her, those who do not comply could be taken to court. At least five Christian leaders are under investigation, so they have requested copies of sermons preached in their churches, after complaints by criticizing the "gay lifestyle". Ña Mayor says that pastors preach from the pulpit against homosexuals will be legally accountable for the "discrimination". But the Rev. David Welch, executive director of the Texas Pastor Council, also received a subpoena and said he will not let intimidated by the mayor: "We will not give up our rights of the First Amendment," Welch said. "This is absolutely a total abuse of authority" [4].

IV. September 2015: The official Kentucky Kim Davis was sent Thursday to prison for contempt after refusing to register gay marriages finally was released and left out of its functions [6].
While in the Roman and Orthodox churches reject outright the practice of homosexual relations based on the Christian tradition about it, as well as in the traditional and literal interpretation of the texts of the Old Testament and the New Testament on the subject, including Christian churches there is a great diversity of views and practices regarding homosexuals. Other aspects also reject any non-condemnatory approach to the subject of homosexuality, among them the The Church of Jesus Christ of Latter-day Saints and evangelical denominations adhering to Christian fundamentalist movement. Moreover, there are churches, usually in the Protestant area, which are either tolerant of homosexuality or there is a lively debate within the denomination (the Anglican Church and some Methodist, Baptist and Presbyterian churches) or fully accept the fact and homosexual practice and even bless such marriages (Congregationalist and Unitarian Universalists mainly).

Within Catholicism, there are collective and platforms that advocate equality of homosexual practices and heterosexuals at all levels, as we are the Church, or the Christian Networks platform, the official position of the Vatican is the rejection of homosexual practices and acceptance of gays and lesbians long as they maintain total abstinence behavior, ie caste. Instead within Protestantism murky waters down about it.

Week 70 is getting closer. What side are you on?