Investigation. Progress towards the Single Religion. By Fabian Massa. 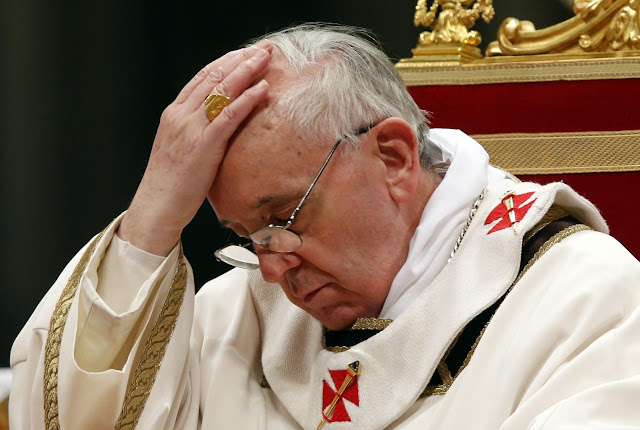 The society of the early twenty-first century is completely immersed in postmodernity, with a scale of values ​​passed by the optics of individualism and pure and selfish humanism, interested only what everyone "feels" as an indicator of good . The most important Evangelical Churches are dominated by pastors who only seek their economic interest.

Most congregations do not know Biblical Doctrine and are carried by their unscrupulous leaders noses without understanding where they go.

Churches whose pastors are affirmed in the Word of God in the US, are under threat of being dispossessed of their privileges, hunted down and "taken out of circulation."
Believers began to gather in homes in small groups, increasingly closed because of the prevailing political persecution in their country.

The Church of Rome, during the pontificate of Benedict XVI, in October 2009 announced its willingness to host all Anglicans who want it and for it approved an Apostolic Constitution (standard maximum range) which provides, among others, the management already married Anglican clergy as Catholic priests, the Constitution also provides for the granting Anglicans groups to return to fold of Rome to enter into full communion preserving their tradition. Those who join Roma will be "Catholics Anglican rite, the same as the Uniate (Catholic Byzantine rite or those of other Eastern Rite churches) who keep their traditions and recognize the authority of the Pope," they said Vatican sources, who noted that although it is not the first time that an Anglican is passed to the Church of Rome, but now it is about a hundred parishes (about 500,000 souls) [1].

In January 2014, Tony Palmer, a young charismatic preacher of the Communion of the Episcopal Evangelical churches, had visited Francisco at the Vatican. During this meeting, he recorded with his iPhone a message addressed by the Holy Father to an American Pentecostal conference. The Protestant leader offered a genuine message of brotherhood, unity and love, explaining the Pentecostals that divisions between Catholics and Protestants no longer had reason to be after the common Catholic-Lutheran declaration on the Doctrine of Justification 1999.

According to this Catholic-Lutheran, the two parties recognized that "only by grace through faith in the saving action of Christ, and not on our merits, we are accepted by God and receive the Holy Spirit, who renews our hearts, It enables us and calls us to good works. " Shortly Palmer died in a motorcycle accident. "Ecumenical post" the take the influential pastor Rick Warren [2] in November 2014, Warren was part of the international symposium speakers religious Humanum, in the Vatican, dedicated to the complementarity between man and woman. Humanum also brought together religious leaders from around the world, Christian and non-Christian religions, in order to examine and propose again the beauty of the relationship between man and woman in marriage. Rick Warren, the influential pastor of a megachurch Protestant American, has recently called on all non-Catholic Christians to join the Pope Francisco and the Catholic Church in order to carry out common objectives [3].

During the reign of Francis I, he joined Roma new groups of Anglicans and Orthodox and some Protestant pastors, according to a statement from the "Holy See Press Office," on Thursday May 7, 2015, was conducted a meeting headed by the Pope and the Traettino pastor, whom the Pope prayed laying his hands. Italian Giovanni Traettino shepherd, the Vatican had requested the meeting with the Pope, leading a group of a hundred evangelical pastors. The community of shepherds, the most Pentecostals, came from various parts of the world, and has as a precedent the relationship established with the papal trip to Caserta Francisco 2014. The visit of pentecostal group could be an exchange of courtesy with Francisco, who was the first pope to leave the Vatican to meet with representatives of the Evangelical Pentecostal Church [4].

The prophecy is being fulfilled before our eyes, false doctrines and false teachers are called "Anointed" as Rick Warren, Traettino, Joel Osteen and many others. Those who truly seek God's Word are less and less, while heretics are seemingly every day "more blessed". Awaken your you sleep !!