REFLECTION. PROGRESS TOWARDS THE ONLY OTHER RELIGION (JUN 26-2016). By Fabian Massa. 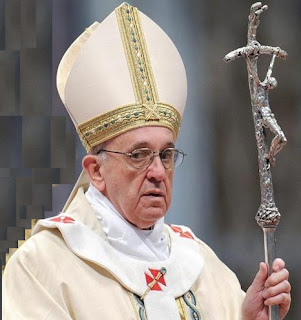 Etchmiadzin, Armenia, 18 km. Erevan, capital of Armenia. a Divine Liturgy (equivalent of a Catholic Mass) given by the Armenian Patriarch Karekin II was conducted

1. No absorption: That is, they will continue to maintain its identity.
2. Acceptance of all the gifts God has given each: Differences that ... will only be reduced to a superficial differences theological question ... .what do not care because it is important for Rome syncretism [1].
3. Listen to the voice of the humble and the poor, many victims of hatred who suffered and sacrificed their lives because of their faith; Here Francisco - faithful to the theology of liberation [2] He makes a cocktail among the humble, the poor, the victims of the Armenian Genocide and all other victims of political persecution, but have nothing to do with the Christian faith, such as Syrian refugees, for example.

In short, a unique approach toward religion. Francisco is trying to unite the "religious" between the Old Church of the Roman Empire of the East and the West, setting the stage for the last Antichrist achieve the political unification of the empire, the revival of the Fourth Beast will rule over many waters "Then I saw a beast rising from the sea, which had ten horns and seven heads. In each horn he had a headband, and on his heads the name of blasphemy against God. 2 And the beast looked like a leopard, but had feet like a bear and a mouth like a lion. The dragon gave the beast his power and his throne and great authority. 3 One of the heads of the beast seemed to have had a fatal wound, but the wound had been healed. The whole, fascinated, world went after the beast 4 and worshiped the dragon because he had given his authority to the beast. They also worshiped the beast and said, "Who is like the beast? Who can fight it? "Revelation 13.1-4 NIV.

Week 70 is about to begin, the actors are interpreting the previous scenes. We are ready?

[1] A syncretism, in cultural anthropology and religion, is an attempt to reconcile different doctrines. It is commonly understood that these unions do not keep a substantial coherence. It is also used in reference to culture or religion to highlight their character fusion and assimilation of different elements. https://es.wikipedia.org/wiki/Sincretismo
[2] The theology of liberation is a Christian theological stream composed of several Catholic slopes and Protestant, born in Latin America after the appearance of the Ecclesial Communities, the Second Vatican Council and the Conference of Medellin (Colombia, 1968) It characterized by considering that the Gospel calls the preferential option for the poor1 and resort to human and social sciences to define the ways in which that choice must be made. https://es.wikipedia.org/wiki/Teolog%C3%ADa_de_la_liberaci%C3%B3n
JUN 26-2016 http://www.lanacion.com.ar/1912772-el-papa-pide-que-se-termine-el-escandalo-de-la-division-entre-los-cristianos
Single Religion - NWO.