MAGICAL THINKING IN THE CHURCH 3 - IN SEARCH OF SANTA HAND. BY FABIAN MASSA. 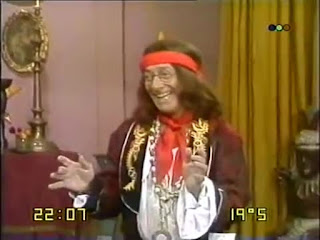 "The Holy Hand" was a character comedian Alberto Olmedo capo [1] that was popular in the '80s. The actor parodied a "Umbanda Pai" whom the other characters in the comic strip came looking for "magic solutions" to their problems.

Today in the XXI century people still have the same existential problems of all time and mentally a "structure of Magical Thinking" which already present were two previous post:
1. SPANISH http://www.tesorosdesabiduria.com/2016/06/reflexion-el-pensamiento-magico-en-la.html http://www.tesorosdesabiduria.com/2016/06/el-pensamiento-magico- in-the-church-2.html

According to this way of thinking, people interpret it is necessary to go to "spiritual Someone" to intercede with the divine to magically "fix things." When people enter the "Evangelical World" have the natural tendency to replace the Medicine Man by Pastor. A good shepherd will teach the difference and bad will take advantage of this to establish itself as the "Anointed One" through which the "Higher Power" bless the crowds descend.

Some understand it and begin to seek a direct relationship with God, knowing that have already been blessed and to seek to live according to the word of the Lord, receive moreover the things they need (Matthew 6:33).

Others, the majority, will continue trying to find some "Anointed Holy Hand" to emit a powerful spell and things miraculously (read magically) consist, without them having the need to understand Scripture and less live up to it.

This post is obviously directed to the second group: "Awake you who sleep in." Holy Pavada "It's time to be born again, so that they can enter the Kingdom.

Week 70 is about to begin, you think you're inside, but according to Scripture are out. Repent, for you to be baptized in the Spirit and can see to enter.

[1] Alberto Orlando Olmedo, also known as the black Olmedo (Rosario, Santa Fe, August 24, 1933-Mar del Plata, Buenos Aires, March 5, 1988), was a humorist and Argentine actor, popularly regarded as one of the most important show in the history of his country, for his outstanding work in television, film and theater "capo-comic". https://es.wikipedia.org/wiki/Alberto_Olmedo