Reflection. "Freedom of Expression" by the Vatican and by the neo-Pentecostals "Anointed". By Fabian Massa. 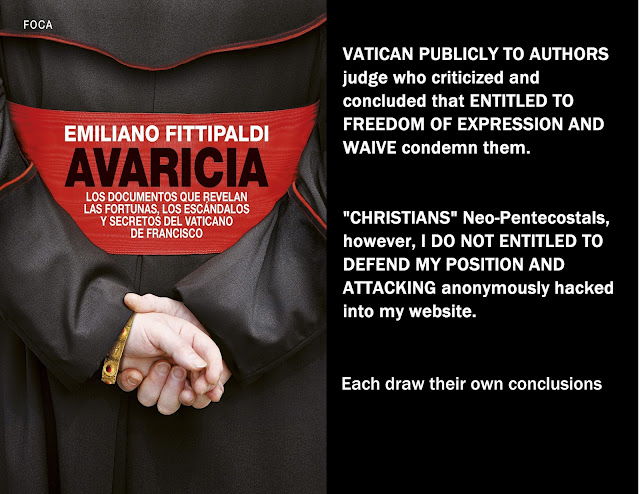 By scandal Vatileaks II
Gianluigi Nuzzi journalists, author of "Via Crucis" and Emiliano Fittipaldi, of "Greed" which revealed shocking wastefulness-books in the Vatican, were acquitted "default jurisdiction" because the facts did not occur in Vatican territory and the two journalists are not small state officials. Justice ended sobreseyéndolos of any charge "on behalf of His Holiness Pope Francisco," the Vatican court also evoked the right to expression of thought "guaranteed by divine right," which is based on freedom of the press [1 ].


For exposing ANOINTED
By publishing a post where he is unmasked how the "Anointed" major mega-churches Neo-Pentecostals of America seriously attacked my website www.lasemana70.com

Evidently the Neo-Pentecostals do not consider that the right to the expression of thought is "guaranteed by divine right," which is based on freedom of the press.

But the Lord says:

"The Lord is the one who does justice and right to all who are oppressed." Psalm 103.6

Week 70 is about to begin and nor thieves, nor covetous, nor drunkards, nor revilers, nor extortioners, shall inherit the kingdom of God [2].