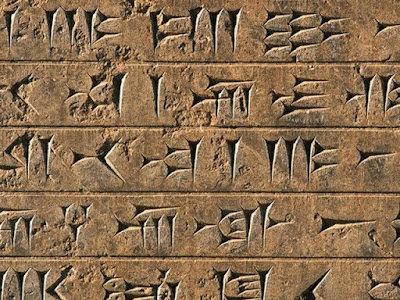 This Babylonian poem, recounts the creation of the world and its organization. The universe, according to this work, was distributed as follows, the god Anu ruled the skies while Enlil (en = lord, lil = land) ruled the Earth and Enki ruled the underworld. There were the Anunnaku (equivalent characters of the "Watchers" of Gen. 6 and Enoch Fallen Angels), who were lesser gods whose reason for existence was to serve the gods above. His job was to work the land and dredge the channels (rivers) for irrigation. One day, tired of working, they rebelled. The solution to this crisis gave Enki, who proposed the creation of a new being, who would have the burden of keeping the gods men. Men would be created in series, in the same way the adobes (sun-dried bricks) were made.


This concept creation series corresponds to the idea of ​​a large humanity in Gen. 1.26 - 27. As in the comparison of the first biblical story and Enuma Elish, here the similarities and differences between the biblical account and are Inuma Illu general and non-specific, namely:

1. HUMANITY IS CREATED BASED ON CLAY
to. 7 And the Lord God formed man of the dust of the Earth, and breathed into his nostrils the breath of life, AND MAN BECAME A LIVING SOUL. GEN. 2.4 - 22
b. GODDESS Nintu-MAMI formed man CLAY MIXED WITH BLOOD GOD WE. ONCE MADE ordered: "VIVAN [2]". INUMA ILLU

2. MOTIVATION FOR CREATION
to. God creates man GARDENING AND THEN CREATE DELICIOUS (EDEN) MAN TO LIVE IN A PROTECTED AND RICH RESOURCE THAT WORK BY ENVIRONMENT, THE MAN HAVE A GOOD LIFE.
b. THE GODS CREATED MAN ON THE NEED TO BE SLAVES to feed them.

It is necessary to separate the times of a story, for example at the time you are reading this post 3 times differ:

1. THIS: YOU'RE READING NOW
2. EVERY TIME THAT WAS WRITTEN WORK
3. THE TIME IT HAPPENED ACTION THAT TELL BRIEFS

Whether the Babylonians and Sumerians writings [3] are older than the Bible, and they have elements in common, the vast differences between them dispel any idea that the Sumerian-Babylonian stories were the basis for the Bible.

[1] A. T. Parallel page 33 and http://dialnet.unirioja.es/servlet/articulo?codigo=912761
[2] There are several versions about the creation of mankind by Enki and Nintu - Mami
[3] SPANISH http://www.tesorosdesabiduria.com/2016/07/study-paralelismo-entre-el-relato.html; ENGLISH http://www.tesorosdesabiduria.com/2016/07/study-parallelism-between-biblical.html
Enuma Elish Inuma Illu parallel accounts of creation.