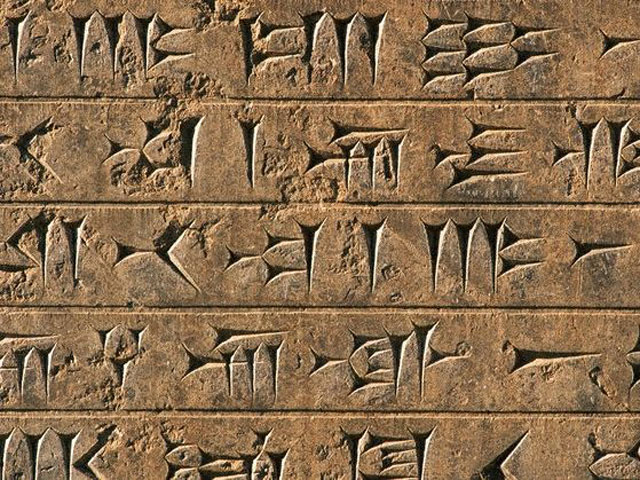 SUMERIA (the Akkadian Sumeru, in Sumerian Ki-en-gi cuneiform, about KI 'land, country' IN 'sir', cañaveral GI) was a historical region of Middle East that was southern part of ancient Mesopotamia, between the plains flood of the Euphrates and Tigris rivers. The Sumerian civilization is considered as the first and oldest civilization in the world. Although the origin of its inhabitants, the Sumerians, is uncertain, there are many hypotheses about its origins, the most currently accepted which argues that no cultural break would not have happened with the Uruk period, which would rule out external factors, such as could be invasions or migrations from other distant territories. https://es.wikipedia.org/wiki/Sumeria 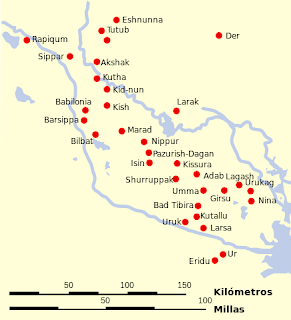 
The Sumerians, like all peoples of antiquity, had a kingdom and proof of this are documents where the royal dynasties are detailed pre and post flood: Lists of Kings Sumerians describe the kings and their governments. They are known more than a dozen copies of these lists, which were found in Susa (Babylon) and the Royal Library of Nineveh in the seventh century B.C. All are believed to come from an original that was probably written during the Third Dynasty of Ur or earlier. The best preserved specimen is called Weld-Blundell Prism [1], which was written in cuneiform towards the 2,170 a. C. by a scribe who signs as Nur-Ninsubur, at the end of the Isin dynasty. The document provides a comprehensive list of the kings of Sumer from the beginning, before the Flood, until his own day, when reigned Sin-Magir, King of Isin (1,827 C -.. 1,817 BC) expressly including 10 Kings longevos who lived before the Flood.

It is a prism of clay, which was found by the Well-Blundell expedition in the year 1,922, in Larsa, home of the fourth antediluvian king, Kichunna, a few kilometers north of Ur, and subsequently has been deposited in the Ashmolean Museum in Oxford. It is believed that the object is earlier in more than a century to Abraham, and was found near the home of the Hebrew patriarch. The list begins as follows: "After descending the Kingdom of Heaven, Eridu (where according to the Bible could have been the Garden of Eden) became the seat of the Kingdom". The Sumerian King List, as the Bible speaks about the Flood: "After the waters covered the earth and the Kingship back down from Heaven, Kingship settled in Kis". The object of the Real List was to demonstrate precisely that the monarchy descended from Heaven, and had been chosen a given city to dominate over all others.

It is another source of information: In the table below we expose below based on the Schøyen [3] MS 2855 list collection which was presented by The National Library of Norway. It is legendary or before the XXVI century characters. C. Their reigns were measured in sars -Periods 3600 years until the next unit 60 in the Sumerian system (3600 = 60x60), and in ners - 600 units.

Scholars who are engaged in this issue compared to some of these kings with the pre-Flood biblical patriarchs as:

Adam with Alulim (also known as Adapa [8] the wise), first king of Eridu. In this story, Adapa is a priest of Ea in the city of Eridu. The story goes that being it a fishing day a strong wind breaks South. Then Adapa cursed the wind and this is inoperative. Being a man has executed a divine action: it has controlled nature. The god Anu, offers him immortality, but Adapa rejects. Commentators establish a parallel between Adapa and the biblical Adam.
Enoch (the sixth in the list), it could identify Enzipazianna (Genesis 4:17).
Noah with Ziuzudra (in the list of Beroso, we will see in Part 2 of this study), that would be the last antediluvian king would have built the boat warned the flood with the help of God.

[1] This is a baked clay "prism" with four equal sides, each about 20 cm high and 9 cm. The center is drilled vertically, so that can be mounted on a frame for rotation and thus easier to read. Each face is inscribed with two columns of about written text. Well-Blundell is the name of the man who gave it to the Ashmolean Museum in Oxford.

[2] The information was extracted from Wikipedia,

[4] Bad-tibira (Place where the metal is refined in Sumerian) or Dûr-gurgurri (in Akkadian) was an ancient Sumerian city that appears in legend as one of the first foundations on Earth before the Flood. It is believed that corresponds to the current Tell al-Madineh, southern Iraq. The Greeks called Pantibiblos. States that the word "tibira" in connection with "metal" shares origin with the "tubal" Hebrew, which allows you to set a reference to Genesis 4.22, when Tubal-Cain links it with the beginning of metallurgy.

[5] Larsa (the Biblical Ellasar Gen. 14.1) was an important city in ancient Mesopotamia. It is located in Iraq in the town of Senkereh, about 24 km. southeast of the ruins of the city of Uruk, and 250 km south of Baghdad.

[6] Sippar in Assyrian-Babylonian language, is the name of two nearby cities of Lower Mesopotamia located on the east bank of the Euphrates River northwest of Babylon in modern Iraq and separated by just seven km .. Both cities they had different names throughout its history but has generally retained the reference to the principal to differentiate divinity. Thus we have, then, "Sippar of Shamash," the current Abu Habbah and "Sippar of Annunitu" modern Tell ed-Der. Sippar is generically cited in A. T. Sepharvites named, (Reyes the Sepharvaim 17.24).

[7] Shuruppak, also called Curuppag, was an ancient city of Sumer. His remains are located at the site of Tell Fara, 200 km. southeast of Baghdad, in Iraq and 70 in southeast Babylon.