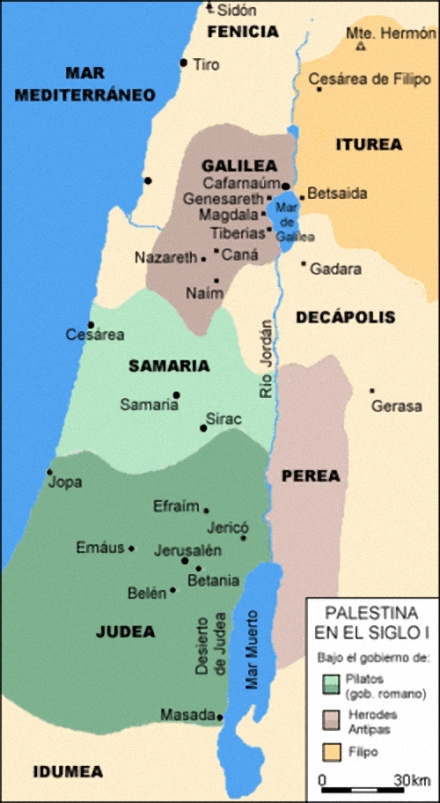 In Chapter 1, the action took place in Bethany [1] (John 1.28) across the Jordan River, in the region of Perea. Chapter 1 to 2 action is ongoing.

1. Day 1 When John the Baptist bore witness to Jesus, who had returned from his stay 40 days in the wilderness after his baptism.

2. Day 2 The Baptist testifies to his disciples that Jesus is the Lamb of God (John 1:29)

The Wedding at Cana
1 And the third day there was a marriage in Cana of Galilee; and was there the mother of Jesus.
2 Y were also invited to the wedding Jesus and his disciples.

The third day is three days after the incorporation of Philip and Nathanael as disciples, remember that Jesus had decided to visit Galilee that day, so most commentators understand that the invitation could have been made by Nathanael who was city ​​of Cana. Most commentators and biblical Cana geographers located at about 13 km north of Nazareth, where Mary, mother of Jesus, who see in verse 3 that was at the party lived.

With respect to Bethany, there is a region of that name lived up to Jerusalem on the other side of the Jordan, located about 100 km from Cana in Galilee and another called the same way about 30 km south of Nazareth and about 43 km of Cana in Galilee. Hendriksen says it's probably the 2nd alternative, since a distance of 40-45 km was easy to cover on foot in three days [2].

3 And when they wanted wine, the mother of Jesus saith unto him, They have no wine.
4 And Jesus said to him, What do you want with me, woman? He has not been my time.
5 His mother said to the servants, Whatsoever he saith unto you.

Salome was the sister of Mary the mother of John the Apostle and therefore her aunt. The fact that Mary was aware of missing wine and also gave us instructions to the servants suggests that more was not a guest, but had an important approach with the owner family home.

Moreover Jesus calls woman, in the Greek text the word is Guné [3] which refers to a married woman today could be interpreted as a lady, therefore the treatment that Jesus gave his mother was loving and respect.

With regard to wine, wine and be understood according to the commentary headwaiter of "best wine" confirms that this was a wine with good body and not fruit juice.

6 And there were there six stone water jars, the manner of the purifying of the Jews, in each of which containing two or three measures.

Stone vessels where Jews kept the clean water they used for purification rituals. Two or three pitchers between 65 and 90 liters each.

7 Jesus said to them, Fill the jars with water. And they filled them to the top.
8 Then he said to them: Draw out now and take it to the headwaiter. And they took him away.
9 When the headwaiter tasted the water made wine, not knowing where it came from, but the servants knew who had drawn the water, called the bridegroom,
10 and said to him: Every man serves the good wine first, and when men have well drunk, then the inferior; You have kept the good wine until now.
11 This beginning of miracles did Jesus in Cana of Galilee, and manifested his glory; and his disciples believed in him.
12 After this he went down to Capernaum, he, his mother, his brothers and his disciples; and they were there not many days.

This miracle of turning water into wine, shows the power of God to mutate one substance into another. It can be said that it was a "private" sign to the disciples, to confirm that he was who they had understood: The Messiah.

God has power to change what is not what it should be:
A bad man a good man
A bad father in an exemplary father.
A poor child in a good son
A man in a hopeless failure hopeful
An inmate at a fair.

Simply put your faith in Jesus and He will.

Week 70 is about to begin, the time for repentance and forgiveness is coming to an end ... do not stay outside the Kingdom.

The Wedding at Cana

[1] Bethany in Aramaic Beth anya, "house poor" house of dates; house of affliction "; transliterated into Greek Βηθανία) https://es.wikipedia.org/wiki/Betania In this passage refers to a place east of the Jordan River, that is outside the territory of Palestine, in present-day Jordan .
[2] Commentary on the Gospel of John Hendriksen PDF page 109.
[3] Strong 1135 Greek.

The Wedding at Cana