Cash Luna accused of faking a miracle after the death of a woman. Posted by CHRISTIAN NEWS 18 FEB 2015 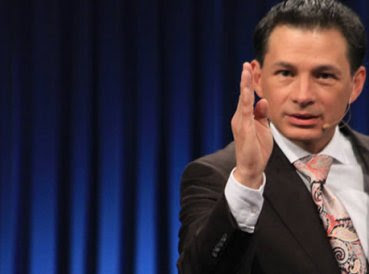 A 15 year old boy very ill, died in the same event "Noches de Gloria" after Cash Luna announced that the woman was healed by divine miracle.

Local media reported that the event would be free, but "gift" of 500 pesos claimed, for a total of 15 million pesos (more than one million dollars).
However, Protestant groups dissociated themselves related activity without explanation.


On June 7, Nancy Hernandez Alvarez (15), who suffered from cerebral thrombosis, he was taken by his parents from Comitan, Chiapas, to Villahermosa, confident they would be healed.
The parents of the child were thrilled with the announcement of the media campaign "Come asks Jesus your miracle." The now deceased took the stage for the pastor Cash said, "Sanada your Child Cerebral Thrombosis" and the crowd cheered for the alleged miracle.

Witnesses said the newspaper Present Villahermosa at the end of the church service, the family prepared to leave and that's when the teenager "he fell into a stroke which could not be recovered, being the output of the event where he fell fulminated".

Paramedics Emergency State System of Tabasco (SEUT), came to give first aid to the child, and in the absence of vital signs (respiration, blood pressure and pulse), she was pronounced dead.

State Attorney said that Hernandez Alvarez died "for reasons associated with their disease" and not finding criminals of death causes, determined that the body of the deceased was not involved for necropsy and be handed over to their relatives for burial.

Before the announcement of the death of the child, the organizers of the campaign quieted those present saying that "already under medical care." Attendees of the Guatemalan minister said that Nancy "had achieved its miracle, because God took her and now rested in peace."

"The deception of his" miracles "is a remarkable example of the use of hypnosis on the masses. Those arriving, seek to be "drunk" and he "drunk" with a paraphernalia of astrology, crystal ball, witchcraft, the Kabbalah, astrological signs and OBEs, under the cloak of "Holy Spirit". All who attend their "shows" receive an endorphin, pleasant and euphoric experience, similar to the pleasurable effects of opiate drugs. Nobody in his "spiritual ecosystem," are interested in knowing the truth. The facts are these, whether within or outside their "ecosystem", "Cash" can not heal anyone, has never been and never will, "and if I could do it, you would anywhere. Supposedly "free" to alcoholics and drug addicts, etc., for "special ceremonies" and desperate families will pay large sums for these "services". As it is a scam many die, but it is covered claiming that his victims did not have enough "faith" and as a result, the "Holy Spirit could not do their job," he said in a research paper he wrote about the case John L. Russell and published on the website the Ventana.net.

"Cash" Luna is an illustrious seller "Potions Streamers, Hypnotist and Fakir" whom neither his nickname is embarrassed. He is cunning and greedy and religious amateur psychologist, who knows how to manipulate the feelings of the naive who lend ear. With its supposed powers, it does not bother to care for the sick in the public hospitals, or patients without resources in rural areas of Guatemala. It's amazing, the way the "Holy Spirit" only accommodates your schedule of "miracles" when the TV cameras are on. and when they go out, no longer allowed to "heal" those who are waiting, questions Russell.