CLIMATE CHANGE, ANTHRAX AND RISK OF SMALLPOX IN RUSSIA. BY FABIAN MASSA. 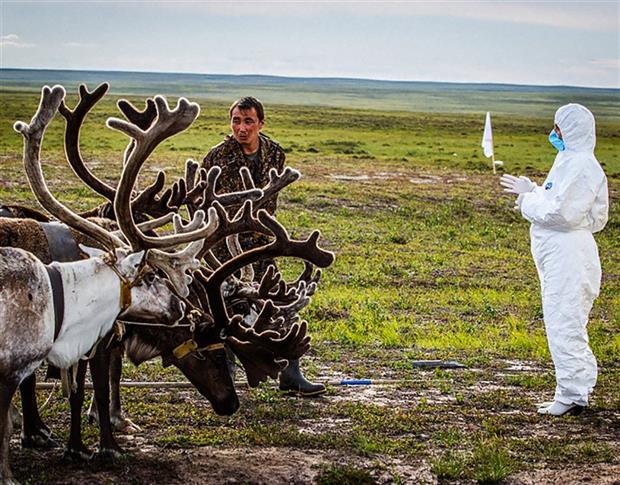 CLIMATE CHANGE, ANTHRAX AND RISK OF SMALLPOX IN RUSSIA. BY FABIAN MASSA.


Permafrost, is the layer of permanently frozen soil but not permanently or snow- covered ice of very cold or peri-glacial regions, such as the tundra. It can be found in circumpolar areas of Canada, Alaska, Siberia, Tibet, Norway and several islands in the South Atlantic Ocean and the South Georgia and South Sandwich Islands.
https://es.wikipedia.org/wiki/Permafrost.

In the Yamal Peninsula 2500 kilometers northeast of Moscow, a boy was killed and 23 people fell ill in July 2016 Anthrax. Scientists believe the comeback is probably due to the de-freezing of a corpse of dead reindeer Anthrax decades. Once released, the deadly bacterium (bacillus) infected numerous herds of reindeer.
There is danger that the same will happen with the smallpox virus and scientists have discovered several "giant virus". Meanwhile, as you can see in the picture, the owner of the reindeer that will be analyzed by a state employee protected from head to toe, is in the same state of helplessness that their animals.
Week 70 is about to begin, there are many devastating diseases that threaten humanity a largely unprotected, as the lord of the picture.