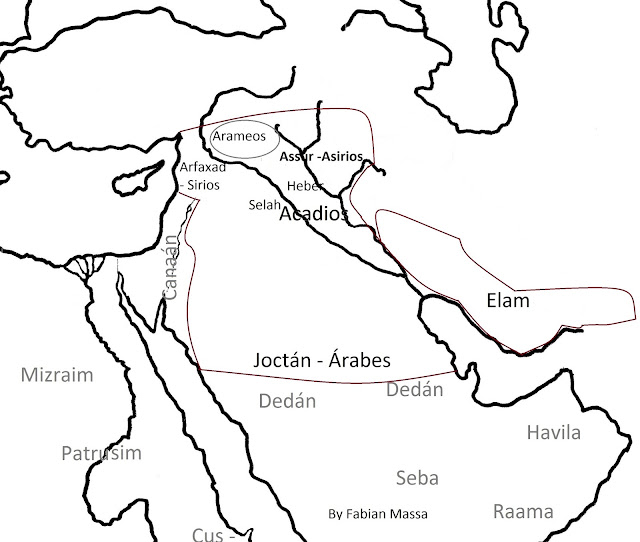 22 The sons of Shem were Elam, Ashur, Arphaxad, Lud and Aram.

Shem / Sem: He was the second son of Noah its meaning is the Hebrew name, reputation or signal.

Elam, now Iran, in Hebrew could be interpreted endless duration related to the Hebrew word Olam, which means Eternal. Son of Shem, and ancestor of the Elamite (Genesis 10:22; 1 Chronicles 1:17). With the same name is called the country in the region that occupied the Zagros Mountains, east of Babylon, called Susiana or Elimais by the Greeks, whose capital was the city of Susa (Ezra 4.9; Nehemiah 1.1). The Medes (Media) were their neighbors to the northeast, and the Persians Southeast. According to Genesis 10:22 and 1 Chronicles 1:17, the Elamites were descendants of Shem, however their language is related to the group asiánico-Armenoid languages, and some scholars relate it to the Dravidian languages ​​(Indo-European). In the times of Abraham were so powerful that sometimes controlled parts of Mesopotamia. In Gen. 14, Chedorlaomer king of Elam, with three allied kings (Amraphel king of Shinar, Arioch king of Ellasar, and Tidal king of nations), subjugated and Philistines certain Canaanite kings for twelve years and devastated his country twice , finally being defeated by Abraham (Gen. 14.15).


Assur, Hebrew, possibly means black; or perhaps Jur man. Son of Shem (Genesis 10:22). Assur down the Assyrians. As a country (Assyria), it was located on the upper Tigris River in Mesopotamia. The name became synonymous with the imperial rule over the region, so that the Babylonians and later the Persians (who succeeded the Assyrians as conquerors of the Middle East) sometimes were called Assyrians (Lamentations 5: 6; Ezra 6. : 22). Assur, northern Iraq today.

Arphaxad, Syrians? Regenerator or rehabilitator Hebrew; Son of Shem and an ancestor of Abraham; He was born two years after the flood (Genesis 10: 22- 24).
Lud name of one of the sons of Shem and his descendants (as a tribe) (Genesis 10:22; 1 Chronicles 1:17). So far, almost no data on this people.

Aram Hebrew, its possible meanings are high or illustrious. Son of Shem, ancestor of the Arameans (Genesis 10: 22-23). Semites who perhaps inhabited the area that is within the great bend of the Euphrates (northern Mesopotamia), the land called Aram-Naham-ayim in Hebrew (ARAM-Naham amid; ayim = water), ie Aram in the midst of the waters, the equivalent of Mesopotamia.

Uz the Hebrew, its meaning could be light or fertile soil. Eldest son of Aram and grandson of Shem (Genesis 10:22, 23). In 1 Chronicles 1:17 says it is "son" (by descent, made very common in Middle Eastern cultures) Sem. Uz was probably the ancestor of an Aramaic tribal family that gave its name to the "land of Uz" where Job lived. Scholars believe could be located southeast of Canaan, bordering the Arabian Peninsula.

Shelah the Hebrew Shelach javelin or renew; Greek Chamber, Hebrew Sela, rock. Child or grandchild of Arphaxad (1 Chronicles 1:18, 24), one of the ancestors of Abraham postdiluvian. Hall also appears in Genesis 10:24; 11: 12-15.

Heber or Eber Sigh; ethereal. [Genesis 10:21], "community". Descendant of Shem, Arphaxad line (Sem-Arphaxad-Sala-Heber) and ancestor of a group of nations called all the sons of Eber (Genesis 10:21, 24, 25), Hebrew phrase that probably means their sense more large. Heber is included in the genealogy of Jesus that gives Lucas (Luke 3:35).

25 Eber had two sons: the first was called Peleg, because in his time the earth was divided; his brother's name was Joktan.

Peleg Division. Son of Eber and ancestor of Abraham (Genesis 11: 16-26). His name meant that in his time the earth was divided (10:25). The division herein is the general dispersion of the descendants of Noah all the earth, or that resulted from the confusion of tongues (Genesis 11: 7-9).

Jectan Hebrew, perhaps small, the (brother) or less will be decreased. Descended from Shem through Eber, ancestors of 13 tribes of Arabia (Genesis 10: 25-29) were established in the region now occupied by Saudi Arabia; Yemen; Oman; Arab Emirates; Qatar; Jordan; Kuwait.