+ STUDY. THE SONS OF CAIN, THE CHILDREN OF SET AND LIST OF Beroso. BY FABIAN MASSA 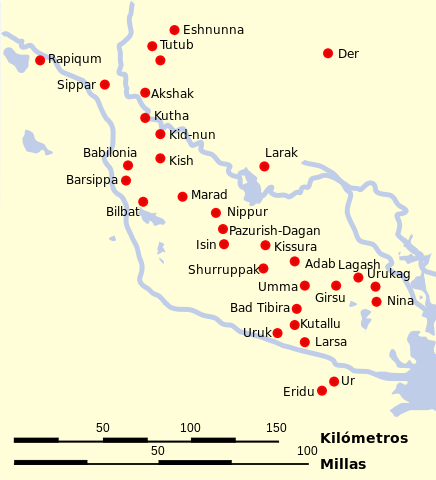 In this study we will relate all that information.

A. Adamic BY LINE OF CAIN.

They ruled from the city of Nod, outside Mesopotamia ie Sumer. The information is given in Genesis 4.17 - 22.

B. Adamic BY LINE SET.

Kingdom of Eden, ruled from the city of Eridu [1] in Sumer.

Kingdom of Eden, ruled from the city of Eridu in Sumer.

The fact that the Bible makes accurate references to the descendants of Cain, implies that it was well known to the descendants of Seth, (knowledge that comes to us through Noah and his sons). A significant detail is that the list of the descendants of Cain truncates abruptly with the children of Lamech, the cause could be the absorption of Cain's line by Seth in Genesis 6.1 "When the sons of God took daughters of the men". Scripture does not speak about any war, so we deduce that this situation may have occurred naturally, by a greater weight of its population (ergo economic, political and military) Set on Cain; that would have occurred when the men of a village took the women on the other, according to this line of thought, it would be fulfilling that God's children (ie, the descendants of Seth) took the daughters of men (women cainitas). This could have occurred at the time of Methuselah, 8th King for the line of Seth. We reached this conclusion because the list of the descendants of Cain is cut in the same 8th place, the three sons of Lamech (Jaban - Jubal and Tubal Cain), and from that moment no longer more hierarchs or patriarchs named this line.

Sons of Cain, sons of Seth, the sons of God, Daughters of Men.