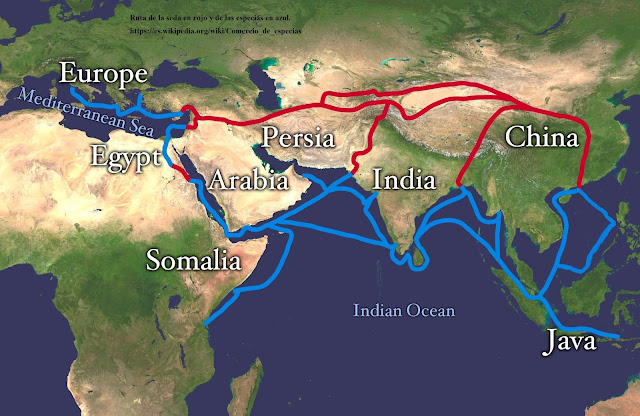 In an interview he gave Professor Daniel Bruno (Master Drew University) Professor David Roldán on the arrival of the gospel to Latin America, Bruno says:

"We could say that Latin America began its relationship with Europe in a position of subordination and subjugation. Which will generate a relationship of economic dependence whose effects are still palpable ".

If we delve into the subject, we see that indeed America is accidentally discovered in the search for an alternative route from Europe to the Far East markets (silk and spices).


Since the early seventh century, Islam spread rapidly northeast to Mesopotamia and Persia; and west to Syria, Palestine and Egypt (the richest provinces of the Byzantine Empire). After Muhammad's death, during the reign of the Umayyads, the expansion continues, the gains made by land to the Maghreb in the late seventh century and reach Spanish shores starting the eighth century. 711 exceed the Strait of Gibraltar and make it to Spain. The Moors are detained at the Battle of Covadonga in 722 in Covadonga, Asturias and the Battle of Poitiers in 732 in Poitiers, France.
Then they spread into Central Asia, Bukhara, Kabul, and will reach the border of India. They limit with the Byzantine Empire, the Caspian Sea and the Caucasus to the north.

The Mediterranean Sea is controlled by the Byzantine Empire after the threat of the Arab conquests, who built a fleet and attack Constantinople unsuccessfully three times. The Byzantines were masters of the sea and blocked the Muslim expansion, keeping anyway trade with them. The sea was established in a border, but above all became a sea of ​​trade. The map would not change until the eleventh century. During the eleventh to fifteenth centuries the Ottomans were strengthened on the domestic front, culturally and linguistically unifying the Ottoman Empire and in 1453 conquered Constantinople, capital of Byzantine Empire.

Thus we come to the fifteenth century with the Mediterranean divided into two regions:

1. The Western Mediterranean drawing an imaginary line from Italy to Africa and from there to the West, having dominion of Christian Nations on the coast of southern Europe.

2. The Eastern Mediterranean, on the other side of "The imaginary line" to the East, with mastery of the north coast of Africa by the Islam.
It is understood that the Ottomans then ruled the Middle East for access Sea and therefore routes Spice [1] (On map: Red the Silk Road and the spice blue).

It was vital to the economies of Europe regain access to those markets.

In 1492 Cristoforo Colombo "Discover" America. Columbus maintained that could be reached the Far East ( "The Indies") from Europe sailing across the Atlantic Ocean to the west. Spices, silk and other products originating in the Far East, had come through the centuries always trade route through Asia to Europe, Asia Minor and Egypt, but from the expansion of the Ottoman Empire in this way was made difficult and was monopolized by them and their partners, the Italian merchants. The Kingdom of Portugal and the Kingdom of Castile, then the early stages of the modern age, wanted these goods without intermediaries.

Because the Portuguese had achieved their Reconquista against the Muslims in the thirteenth century, they took the lead in the competition to reach a new route of the spices that were a direct maritime alternative to Asia. Alternatively, Portugal launched the circumnavigation of Africa from 1460, the route that skirted Africa was monopolized by Portugal, with the exception of the Canary Islands. In 1488 the navigator Bartholomew Diaz found the passage by the Cape of Good Hope, linking the Atlantic Ocean to the Indian Ocean and in 1498 Vasco da Gama (famous Portuguese navigator and explorer) managed directly bind Europe and India, the ocean voyage more long done so far [2]. One consequence of this route was the beginning of the African slave trade, the Portuguese sailors and later the Dutch and English understood that slaves were a "product" that could be traded very profitably. No matter that on the trip died a high percentage of them: "In Africa there were more". As stated by David Roldán (parent) this fact reminds us of the ambiguity of any historical situation where good and evil are developed simultaneously in the same.

In the same way that European traders found slavery as an additional business to trade in silk and spices, the Spanish conquistadors in Latin America found it an excellent business massacring indigenous peoples, stripping them of their lands, and their riches natural. Regarding the Portuguese says Darcy Ribeiro [3]: "Meanwhile the Portuguese found in Brazilian plains great opportunities for plantations that could not develop in Portugal".

Ribeiro said in the interview with David Roldán (Jr.): "For nearly 300 years Latin America was Spanish and Portuguese colony, during this time Europe transfused the riches of Latin America to their own continent. In this way arguably the primitive accumulation of capital that allowed the economic takeoff of Europe and its entry into the capitalist phase was thanks to gold and silver and slave labor extracted from Latin America. So that Europe is enriched, thanks to the looting of Latin America. That makes what some call a dependency relationship, this is an inverse relationship growth. A continent grew, because the other was ransacked. "

Both powers had a monopolistic trading system: the colonies could only trade them, under the conditions established them, so they squeezed the riches of the New World. Obviously the (Catholic) Church accompanied and supported this process, as it was associated with both Kingdoms for them too "Expand your territory".

By the early eighteenth century, the maritime power of Spain and Portugal began to decline and England rose as a new maritime power. Naval dominance and involved the handling monopoly routes, commerce and power.
In 1806 and 1807 the British invasions were repulsed by the Viceroyalty of the Río de la Plata. But the Crown explored a second option if it worked: I support the rebellion of the Spanish Colony, which was oppressed by the Monopoly tax on the production of grain, meat and hides. So England helped in the wars of independence to defeat the Spanish power. And to keep the trade in products that were produced in Latin America.

Daniel Bruno says: "And they did, buying political will of the countries of Latin America, managed to gradually open the market. What was the mechanism? First Free Trade Agreement that is, open ports and get the monopoly to Spain as a sole trader with the Indies was necessary.
Once this is accomplished, the next step was to organize the economic structure of Latin America based on their own interests. This was done as follows: The economic interests of England pushed for that in Latin America only raw materials produced without industrialize, that way they bought at a low price raw materials to different countries: leather, wool, wheat, corn, bananas, meat, and England was manufacturing (gave value added) with work of British workers and then sold to Buenos Aires for example frames (made with Argentine leather) but at a much higher price and leaving the gain in England . This prevented the Latin American countries to develop their own industries.

That was the system that dialed what the international division of labor was called, allocating some countries to be suppliers of raw materials for others to give added value. This economic model has been carried out in Latin America by governments responding to British interests ... In Argentina in this division planned from outside, he was awarded the place to be suppliers of meat, leather and wheat (now soy!) With this model only agro-livestock class, owners of the rooms and estates selling their goods in foreign currency unprocessed These same benefited, were responsible for promoting the import trade, bringing out all kinds of manufactured products abroad. With this structure, the domestic industry had no reason to be, had to only sell raw and prepared to buy it.
It is clear that such a model causes the country is for the few who enjoy this trade export-import and large sections of the population remain marginalized from the circulation of wealth ... so it was until the end of the Second World War when the British power begins to yield to the new world power: the United States. But the dependency model, buying cheap raw materials and then sell expensive manufactured goods remained the same, there was only changed the power that dominated (and still dominates those relationships).

We must say that this structure of domination could not have subsisted for a long time (since it is clearly prejudicial to the countries of Latin America) if the governments of the countries themselves not had permitted or villages had been planted and had said enough. (While this has happened several times in different countries of Latin America), most of the time this model has prevailed quite accepted and tolerated ... Why can last a long time a situation like this? "

We then have the economic domination is the result of a cultural and ideological domination.

David Roldán (Jr.) Dr. Doctor in Theology and Philosophy. Pastor of the Methodist Church and professor of FIET.