THE REVELATION OF GOD AND Idolatry IN THE CHURCH, BY JOHN MACKAY. BY FABIAN MASSA. 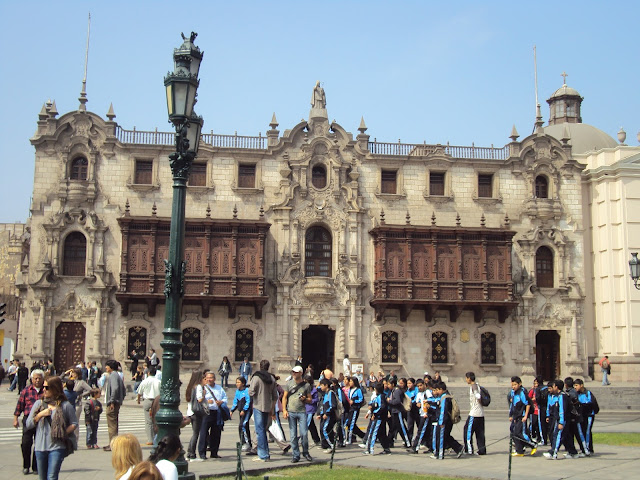 THE REVELATION OF GOD AND Idolatry IN THE CHURCH, BY JOHN MACKAY. BY FABIAN MASSA. LATIN AMERICAN THEOLOGY Handout 3 - PART 1.

John A. Mackay was a pastor, missionary and theologian Scottish-born Presbyterian 1889. [1] and Calvinist. He was a missionary in Lima, Peru, with the Presbyterian Church in the early twentieth century. He coined a famous metaphor of the Christian life and theology, called "the balcony and the way". In official parades in downtown Lima, the church authorities were in the balconies of the historic buildings, with the other authorities. The "common people", however, was down, walking. The believer and the theologian are called, said Mackay, to compromise, to be on the "road" and not the "balcony".

For Mackay (philosophically aligned existentialism [2]), one of the dangers of human existence is the lack of authenticity, life lived "as others want" without passion and commitment.

Existentialism dominated European philosophy from 1940 to 1960, but already is being prepared with thinkers of the 1920s (Kierkegaard, Unamuno, Jaspers, Sartre, Camus, Heidegger, Rosenzweig, Barth, Schmitt and others). A life devoted solely to the theory or an understanding of reality that it considers that the only "real and true" is the scientific discourse or material and tangible reality, is a life (and a worldview) rejected existentialism. Regarding the known, so this current is more important to the subjective experience that objectivity.

A. The "Christian Reality" according to Mackay, has 4 aspects:

1. The revelation made by God - (grace). the objective aspect of the Christian reality.

2. The meeting of man with God - (faith). The subjective aspect of Christian reality.

3. The community or people of God - (collective aspect of Christianity)
4. Human obedience to God - (ethical aspect).

1. The revelation made by God

Starting point - God is self-revealed through its wonders (historical facts) to his people Israel. The perfect Revelation is Jesus Christ, God made man. Nikolai Berdyaev "The point of the Christian religion is not God nor man, but the God - Man". P. 11. The revelation of the Gospel is that God so loved the world that He gave His only begotten Son, that whosoever believeth not perish but have eternal life. Which speaks of a high cost, by God and transformed by man (for which there must be repentance). The only way to interpret Christian revelation, understanding shall love the Lord your God with all your mind (Matthew 22:37) is by theology, which serves as an instrument for the interpretation and presentation of Christian revelation.

a. The Doctrine as a weapon: In order to defend the faith, doctrine does lack.

b. The flag Doctrine as: What defines us in life is our belief since according to her act.

2. The meeting of man with God

Revelation of God, Himself becomes accessible to men. Mackay says: "While Revelation represents the objective reality of Christian aspect, the meeting comes to represent the subjective, personal appearance".

The encounter with God has two aspects:

a. The initial move of God who comes to man (Gracia)

b. Man's reaction to the divine action, faith, man's response to God's call.

Mackay says that man's encounter with God can be in two ways:

a. The man who finds it without going through a dramatic crisis (those born in a Christian home, for example)
b. The man who is in the midst of a dramatic situation.
Beyond the way or time of the meeting, the important thing is that the same result a transformed life.

3. The community or People of God

In A.T. God chose Israel, with which he made a pact and dwelt among them: 45 dwell among the Israelites and be their God. 46 Then you will know that I am the Lord your God, who brought them out of Egypt to live among them. NIV Exodus 29.44-45.
In N.T. the Christian Church is the community of those who found God, experiencing God's presence until the time He get us again. At the Last Supper, Christ said after having broken bread: "This cup is the new covenant in my blood, which is shed for you."
Institutional organization must serve the Christian community as a tool to effect its members in the preaching of the Gospel.

The Christian community owes obedience to God, which is reflected in good works. Mackay says: "Only men who do the will of God and do the works of God, are God." Christians should copy Jesus, to have him "Model".
Mackay adds that Christianity is equal to the fulfillment of the Decalogue + Love one another.

We saw then that the Christian reality has four aspects (is quadrilateral, Mackay says, referring to the New Jerusalem of Revelation 21):

1. The Revelation of God (which he himself performed) as the objective reality, which leads to theology, the doctrine aspect.

2. The meeting of man with God, which is the subjective aspect of reality, which gives rise to the Christian experience and worship.

3. The community of God, which is the collective aspect of reality, which leads to the Church.

4. And obedience to God, who is the ethical aspect of reality, gives the basis to the Christian way of life.

Mackay clearly identifies four types of idolatry within Christianity that can replace the Christian reality:

1. The Doctrine as an idol

What determines the validity of the doctrine as an intellectual creation of the Christian is the revelation of God. Mackay says: "The Christian can see everything in the light of what is revealed by God. This light shines in Holy Scripture, shining especially how personality, work and teaching of our Lord Jesus Christ. "
Mackay also says "Light of revelation of the reality of God in Scripture, it is necessary that the Holy Spirit is inside of man."

NIHILISM
Nietzsche structured conceptualization of the term, but it already existed as current in ancient Greece represented by the School and cynical skepticism.
Nihilism (from the Latin nihil, "nothing") is the artistic and philosophical trend which is based on the denial of one or more of the assumptions established ways of life.

Nihilism is often presented as an existential nihilism way argues that life has no objective meaning, purpose, or intrinsic value. Nihilism can be considered social, political and cultural critique of the values, customs and beliefs of a society, to the extent that they participate in the meaning of life denied by such philosophical.

The term nihilistic was created by the Russian novelist Ivan Turgenev in his novel Fathers and Sons (1862): "nihilist is a person who does not bow to any authority, who does not accept any principle on faith" and spread dramatically in Russian society of the second half of the nineteenth century.

RELATIVISM
Relativism is the concept which holds that the views have no universal truth or validity, but only have a subjective and relative to different frames of reference validity. In general, discussions about relativism focus on specific issues; thus, moral relativism, which holds that there is no absolute right or wrong but dependent on the specific circumstances. Similar principles are defended both linguistic relativism and cultural relativism.

Among other philosophers who have written on this subject it is included Friedrich Nietzsche and Martin Heidegger. Nietzsche believed that nihilism was a result of the death of God (God is dead), and insisted that should be overcome. Heidegger described nihilism as the process that follows the consciousness of Western man and that would be expressed at these three moments:

1. Nihilism as a result of the denial of all existing values: the result of doubt and disorientation.

2. The nihilism and self-affirmation of that initial denial: the moment of reflection of reason.

This is the basis on which it has built, according to Nietzsche, the new philosophy. The man causes, first, the death of God or destruction of obsolete values ​​[3].

Therefore, with the idea that God is dead and everything is relative, there was great confusion in society. Mackay cites the revival of polytheism, atheism, mythologies.

Mackay refers there was a "terrifying ignorance" among believers (both pastors and teachers as people of the congregation) about Christianity in his time. And that ignorance of the reality of God prevented them unbelievers explain the reality of God. To remedy this situation, Mackay proposed theologically educate the congregation, so that they are not dragged into destructive philosophies.

If Mackay today to rise from the dead, he would be horrified that the "terrifying ignorance" of the Church has been raised to the Nth degree.

Mackay saw the resurgence of Buddhism, spiritism, Marxism and other religions and philosophies as threats to Christianity, which could conjure with a biblical theology that makes true believers crossed singers.
The Bible is the book of God's revelation, and no revelation from Him out of Scripture. At this point, Mackay presents two issues:

1. The doctrine, as the science of men, can not cover all of God's revelation. When a doctrine or a set of them as the only absolute truth is made absolute, ie: when as men we enclose God within "Cajita of our understanding of Him" ​​we have fallen into idolatry.

2. The revelation of the reality of God is given in the Bible. But it may be the case that a person knows Scripture from cover to cover and still is, as Mackay says, "a pagan deep" and this why? Because what saves is not the intellectual knowledge of the Bible, but saving faith in the God-Man Jesus Christ, which is what transforms us into the image and likeness of Him says Mackay. "The belief about Christ is absolutely necessary . But it is as a tool for the person, seeing Christ is and what he has done, surrender to Him. The belief, doctrine must serve as a tool and as a guide to lead the believer to Christ, but she can not be replaced the encounter with Christ and devotion to Him. "

Mackay says that knowledge of God does not save, it's like religion professors who were the balcony of the historic buildings of Lima during parades, which saves is walking the Camino as Christians.

1. Belief in God without obeying not only saves. In Santiago 2.19, James exhorts believers to do according to what God commands and warns that even the demons believe and tremble, ie fear God.

2. Only those who are on the road come to Salvation: 35.8 Isaiah, the prophet warns that only the saints and connoisseurs can walk along the Way of Holiness.

Finally, Mackay also warns that faith without works is a dead faith, that the purpose of the Church is preaching and helping the poor.

[1] Presbyterianism is a branch of Protestantism that has its roots in Calvinism doctrinal and institutional Protestant Reformation in Scotland, led by John Knox
[2] Existentialism is a philosophical movement that originated in the nineteenth century and lasted approximately until the second half of the twentieth century. European philosophical current that considers the fundamental question being is existence as human existence, and not the essence, and that with respect to knowledge is more important than the subjective experience objectivity. "Kierkegaard, Heidegger and Sartre are the main representatives of existentialism, which developed mainly in the interwar period and after World War II." Existentialist philosophers focused on the analysis of the human condition, freedom and individual responsibility, emotions and the meaning of life.
[3] https://es.wikipedia.org/wiki/Nihilismo